‘I Work for an Evil Corporation’: Pfizer Scientists Reportedly Claim Natural Immunity is ‘Better than Vax’ 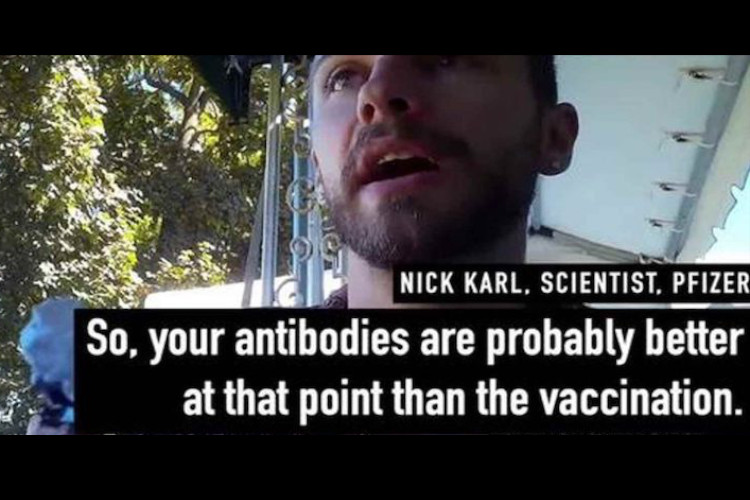 Over the past few weeks, Project Veritas — which has a less than perfect track record with their hidden camera exposés — has been focusing their efforts on the medical establishment. And this week, it appears they have hit a bit of a bombshell as they reportedly interviewed three Pfizer scientists with ties to Pfizer’s COVID-19 vaccine.

It is important to note that TFTP was unable verify the identities of these alleged scientists as their linkedin and twitter profiles have since been deleted. However, Pfizer has yet to denounce them or otherwise issue any statement distancing themselves from the three individuals below.

Given the nature of their conversations, Pfizer will likely begin conducting damage control immediately and could already leaning on “fact checkers” to dismiss the following information for them.

In the brief 10-minute video released Monday night three scientists who reportedly work for Pfizer — in three separate conversations — told the undercover journalist they believe natural antibodies produced following a Covid-19 infection are superior to the vaccine. They also had some particularly harsh words for their alleged employer.

Nick Karl, a biochemist at Pfizer with involvement in the development of their vaccine told the undercover journalist: “Your antibodies are probably better than the vaccination… When somebody is naturally immune, like, they got COVID, they probably have better, like, not better, but more antibodies against the virus.”

“So when you actually get the virus, you’re going to start producing antibodies against multiple pieces of the virus,” Karl said. “So, your antibodies are probably better at that point than the vaccination.”

“The city [of New York] needs like vax cards and everything. It’s just about making it so inconvenient for unvaccinated people to the point where they’re just like, ‘F*ck it. I’ll get it.’ You know?” he said.

Chris Croce, Pfizer Senior Associate Scientist, had the following conversation with the journalist in which he alleged that the vaccine is being given special treatment over other successful covid treatments like monoclonal antibodies. He also reinforced the natural immunity superior claim.

Veritas Journalist: “So, I am well-protected [with antibodies]?”

Croce: “You’re protected most likely for longer since there was a natural response.”

Croce expressed dismay with his company’s direction and moral compass:

Veritas Journalist: “So, what happened to the monoclonal antibody treatments?”

Croce: “I still feel like I work for an evil corporation because it comes down to profits in the end. I mean, I’m there to help people, not to make millions and millions of dollars. So, I mean, that’s the moral dilemma.”

Croce: “Basically, our organization is run on COVID money now.”

Toward the end of the video, Croce comes back in with another bombshell and acknowledged that Pfizer is conducting tests to determine whether their vaccine causes myocarditis in younger individuals.

“So, yeah, we’re doing, we just sent, like, 3,000 patients’ samples to get tested for like, elevated troponin levels (to detect heart attack) to see if it’s vaccine based – or so…”

A third Pfizer scientist, Rahul Khandke — on which TFTP could not find any information associating him with Pfizer — said that Pfizer pressures employees to conceal negative information from the public.

“We’re bred and taught to be like, ‘vaccine is safer than actually getting COVID.’ Honestly, we had to do so many seminars on this. You have no idea. Like, we have to sit there for hours and hours and listen to like — be like, ‘you cannot talk about this in public,” said Khandke, who also agreed on the antibodies superior claim.

“If you have [COVID] antibodies built up, you should be able to prove that you have those built up,” he said.

While the above information given by these reported scientist may seem utterly insane, if we consider the track record of this pharma giant, it should come as no surprise.

Nevertheless, many Americans have short memories and seemingly couldn’t care less about the criminal past of this company.