‘Not Supposed To Happen’: US State With Highest Vaxx Rate Sees Record Surge In COVID Cases 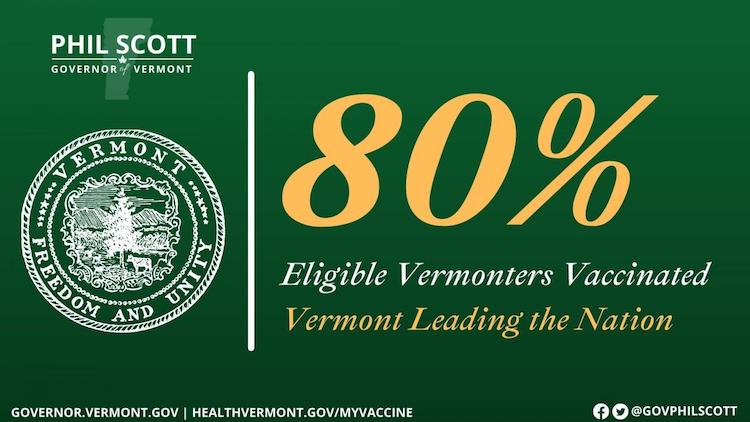 Vermont, the state with the highest vaccination rate in the United States, is experiencing a CCP virus surge at levels not seen since the pandemic’s peak last winter.

The number of cases in Vermont is at a record level, hospitalizations are close to the records notched last winter, and the state recorded the deadliest day and the second deadliest month of the pandemic in September.

“I think it’s clearly frustrating for all of us,” Michael Pieciak, the commissioner of the Vermont Department of Financial Regulation who monitors CCP (Chinese Communist Party) virus statistics for the state.

Cases in Vermont, already at record levels for the state, just keep on rising, even with the highest vaccination rate in the country — 89% of the 18+ population is at least partially vaccinated, 88% of 12+ & ~100% of seniors

Anyone asked Fauci why he was so wrong about 50%? pic.twitter.com/q5EIfChw2W

More than 69 percent of Vermont’s population has been fully vaccinated against COVID-19 as of Sept. 24, according to the CDC, far above the national rate of 56 percent.

The state recorded the highest rate of hospitalizations per 100,000 residents on Sept. 30, breaching a record set on Jan. 31 last year. Eight people died of the CCP virus in Vermont on Sept. 13, the highest grim total recorded since the outbreak of the virus.

In late August, four of ten cases of COVID-19 in Vermont were among vaccinated people, according to a letter signed by 90 employees of the Vermont Health Department, including state Epidemiologist Patsy Kelso.

“We can’t be in a perpetual state of emergency,” Scott said this week.

The four states which follow Vermont in terms of the highest vaccination rates in the nation are also experiencing alarming signs.

The head of UMass Memorial Health, the largest health system in central Massachusetts, said recently that regional hospitals were seeing nearly 20 times more COVID-19 patients than in June and there isn’t an ICU bed to spare. Massachusetts has the fifth-highest vaccination rate in the nation.

In Connecticut, the second most vaccinated state in the U.S., the legislature recently extended the governor’s emergency powers to make it easier to cope with the latest wave of the pandemic.

On Sept. 22, Maine, the third most-vaccinated U.S. state, had nearly 90 people in intensive care units, a pandemic peak for the state.