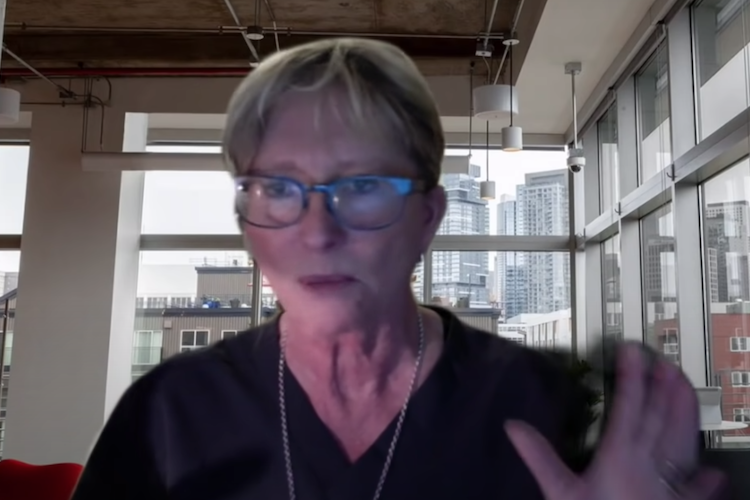 An award winning spinal surgeon and former president of the Association of American Physicians and Surgeons believes that current coronavirus vaccines are dangerous bioweapons being deployed against the people.

Dr. Lee Merritt, who previously studied bioweapons while serving as an orthopedic surgeon in the United States Navy for 9 years, sat on the board of the Arizona Medical Association, and has published numerous peer-reviewed papers, believes that mRNA-altering coronavirus vaccines currently being distributed in the United States are rewriting our genetic code to make us vulnerable to a second virus later on.

“I believed early on in February that this was a biologically manipulated bioweapon because the minute that anybody popped up with data suggesting that they were censored,” she said in an interview last month with The New America.

Based on her time spent in bioweapons research, Merrit believes that we live in an era of ‘fifth-generational warfare’ where instead of using weapons on the battlefield, covert biological agents, economic warfare, and propaganda are most effective in turning the tables of power between nations.

“We had a lot of bioweapons over the years and the one I was very worried about was smallpox. But most of these bioweapons were either hard to distribute or there was treatment for them,” she said. “I think that there is a host of evidence that shows coronavirus is a naturally occurring very benign virus that doesn’t even give most people the cold but at the most it’ll give you a common cold.”

Vaccines are most effective when used against an untreatable and deadly virus, she says. While diseases like smallpox and polio were effectively treated with immunizations, scientists have discovered promising treatments for coronavirus since the pandemic began such as Hydroxychloroquine and Intravenous Vitamin C.

“If we are at biowarfare right now as a part of this multi-dimensional warfare, if you have a treatment in your back pocket they cannot terrorize you with viruses and that’s important because… [the vaccine] doesn’t prevent transmission by their own admission.” ~Dr. Lee Merritt

Although prevention and treatment reduce the need for a vaccine, such information is routinely censored by social media companies and demonized by the mainstream media. Even Sharyl Attkisson, a tenured former CBS journalist, had one of her reports removed from YouTube for relaying information which ran counter to the official position of the World Health Organization (WHO).

Coronavirus numbers are widely disputed, however, scores of doctors and scientists have been speaking out for the better part of a year about the disproportionate amount of harm done by lock downs and forced mask wearing. One Canadian researcher estimates that the long-term cost of lock downs will far exceed that of the virus itself by as much as ten times.

Merritt explains the difference between coronavirus vaccines and regular immunizations:

“[Coronavirus vaccines] are not giving you a pathogen … what they are doing is programming mRNA. mRNA is like DNA but it’s the messenger RNA. It’s what makes proteins in the body. It’s kind of like a computer chip that you put into a 3D printer and then you tell it what you want it to make and it prints it out. We have that in engineering and this is the biological equivalent.

Well, in this case they’ve made a piece of this mRNA to create, in every cell of your body, that spike protein (or at least part of it) and you’re actually creating the pathogen in your body.” ~Dr. Lee Merritt

When you go to get your coronavirus vaccine, you are actually not getting a vaccine as we have always known them. Instead, messenger RNA is injected into your body which then alters your genetic code to begin producing its own modified version of the coronavirus, which your immune system then theoretically learns to combat.

According to Merritt, no long-term studies to verify the safety of this form of vaccination in humans have been completed and animal studies have resulted in what she refers to as ‘antibody-dependent enhancement’ where the virus enters into the body undetected because the immune system now views it as belonging to the body, ultimately causing near-immediate death.

“We have never made it through an animal study successfully for this type of virus. We have never done this in humans before,” she says. “The longest that they’ve really followed people after the vaccine is two months. Well you see, that’s not enough time to know that we won’t have that antibody enhancement problem.” ~Dr. Lee Merritt

Merritt speculates that this type of procedure is exactly what a foreign adversary would use if they wanted to wage clandestine biowarfare without having the process traced back to them.

“This is a perfect binary weapon. There’s no way I know exactly what that mRNA is programmed to and neither do you and neither do most doctors. The doctors can’t get at that data. That’s for the guys at the very top of this project… If I were China and I wanted to take down our military, I’d just make an mRNA that I know it doesn’t exist in nature so nobody’s going to die from a vaccine and then two years later I release whatever it is that I made… and it causes this immune enhancement death.” ~Dr. Lee Merritt

Although Dr. Merritt does not recommend whether or not one should take the vaccine, she does give one uplifting piece of advice.

“If you want to get out of the pandemic right now it’s really easy. You turn off your TV, you take off your mask, you reopen your business, and you live your life.”

Watch this recent interview with Dr. Lee Merrit and Alex Newman of The New American here, and please send an email to wakingtimes@gmail.com if you notice that this video has been removed.

This article (Respected Doctor and Bioweapons Researcher Believes Covid Vaccines Are a Form of ‘Weaponized Medicine’) as originally created and published by Waking Times and is published here under a Creative Commons license with attribution to Phillip Schneider and WakingTimes.com. It may be re-posted freely with proper attribution, author bio, and this copyright statement.