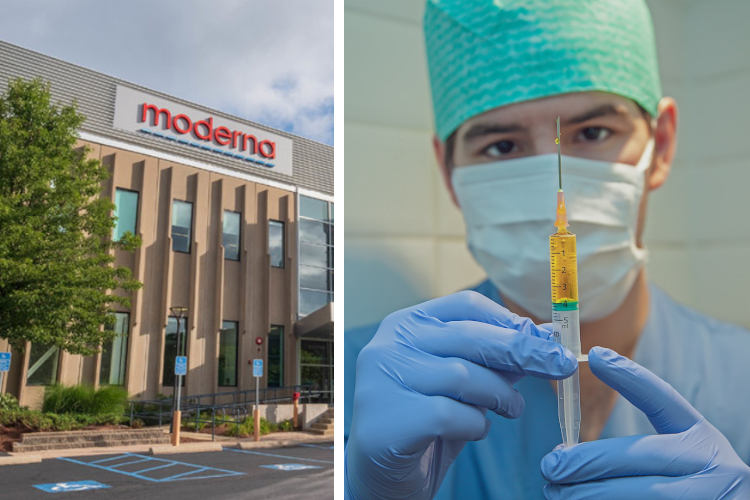 In light of the conversation and growing debate about the rapid development of a Covid-19 vaccine, many are watching closely to see who wins the race.

There is a ton of money in this, as evidenced by the recent $200 billion stock market bubble in vaccines that started when the pandemic began to affect Western nations and politicians and experts began talking up the need for a vaccine in order to ‘return to normal.‘

“In the past two months alone, Wall Street investors have pumped billions into a handful of biotech companies in the early stages of producing vaccines or drugs to combat the novel coronavirus… The result: a coronavirus investment bubble that’s already approaching nearly $200 billion in stock market value.” [Source]

Leading the pack at present is biotech firm Moderna, who recently made headlines for attempting the first human trials of a CV vaccine. Their efforts are financially backed by Bill Gates and when they were first announced, Moderna stock value jumped significantly. However, shortly thereafter a number of participants in the trial reported adverse effects including high fever. Moderna stock has been on a roller coaster ever since.

“Biotech company Moderna Inc. dosed 45 patients between the ages of 18 and 55 with 25, 100 or 250 micrograms of its experimental drug. After receiving a second booster shot, those at the 25 and 100 dosage levels were found with antibody levels that were equal to or exceeded those found in patients who recovered from COVID-19, the company said in a press release.” [Source]

On May 22nd, Robert F. Kennedy, Jr. wrote a follow up on the trials, noting:

“Despite Moderna’s cheery press release this week, the clinical trial results for its groundbreaking COVID vaccine could not be much worse.

The vaccine, developed and championed by Anthony Fauci and financed by Bill Gates, used an experimental mRNA technology…

Moderna allowed only exceptionally healthy volunteers to participate in the study. A vaccine with those reaction rates could cause grave injuries in 1.5 billion humans if administered to ‘every person on earth’.” ~Robert F Kennedy, Jr.

Then on May 27th, the New York Post followed up, reporting on participants who fell ill:

“A volunteer in a key coronavirus vaccine trial has revealed that it left him the sickest he has ever been in his life — but still “cautiously optimistic” about the drug’s potential.

Ian Haydon, 29, identified himself in a series of interviews as one of four volunteers who had bad reactions during the trials that Moderna hailed for “positive” early findings of antibody responses.” [Source]

During all of this, Moderna’s top executives have cashed out a record $89 million in stock, as reported by Stat:

But the volume and timing might prove alarming to Moderna’s shareholders, especially in light of the company’s May decision to raise more than $1 billion in a stock offering.” [Source]

Stat goes on to ask the important question:

“If Moderna’s early-stage vaccine can one day prevent coronavirus infection and the company’s best days lay ahead, why are insiders selling?” [Source]

Indeed, why are executives cashing out when other investors are jumping in?

We recently published an article highlighting statements from Bill Gates, published on his personal blog, where Gates expressed his enthusiasm for the rapid development of a CV vaccine may use experimental mRNA/DNA technology, which we believe runs the risk of altering human DNA.

Facebook fact-checking organization Politifact flagged our article as false, commenting that mRNA and DNA vaccines have been proven safe, although neither have ever been approved for human use.

Furthermore, Politifact also noted that our claim that this new class of vaccines may alter human DNA was false, saying that, “RNA vaccines have been shown to create “a safe and long-lasting immune response in animal models and humans”  in clinical and preclinical trials.”

“The most recent research also shows that RNA vaccines, which are being tested for COVID-19 right now, do degrade naturally and don’t alter DNA permanently…

An article in Frontiers on Immunology analyzed new studies that found mRNA “cannot potentially integrate into the host genome and will be degraded naturally.” Basically, after the messenger molecules create antigens for the body to react to, they will naturally stop being used and break down.” [Source]

Out of concern for health freedom and public awareness we looked a little deeper into this issue, and while there is relatively little reporting on this to date, a 2017 Moderna white paper entitled, mRNA Vaccines: Disruptive Innovation in Vaccination, touches on this issue. In a section titled ‘DNA Vaccines,’ the following safety concern about DNA vaccines (not mRNA vaccines ) is documented:

The key challenge associated with DNA vaccines is that they must penetrate the cell nucleus (crossing two membranes; the cytoplasm and the nucleus). The DNA must then be transcribed in the nucleus into mRNA before moving to the cytoplasm to stimulate antigen production. This core complex pathway often requires both larger doses and special, often painful delivery devices using electric shocks or gold microspheres into person’s skin to deliver the DNA vaccine. Once inside the nucleus, DNA vaccines have a risk of permanently changing a person’s DNA.” [Source]

Given the financial stakes involved and the potential that a rapidly developed CV vaccine may be forced upon those not willing to take a vaccine, there is an urgent need for understanding of the fact that vaccines in general, and specifically the new generation of vaccines being developed for CV, come with legitimate safety concerns which are rarely reported on by mainstream media, and in many cases even censored on social media.

If informed consent is indeed the law of the land, journalists should be working to uncover the unbiased truth on these issues, and for something like this, there is no better source than the actual developer of the vaccine. Without accurate and complete information, informed consent is not possible.

This article (Moderna Vaccine White Paper – “DNA Vaccines Have a Risk of Permanently Changing a Person’s DNA”) was originally created and published by Waking Times and is published here under a Creative Commons license with attribution to Dylan Charles and WakingTimes.com. It may be re-posted freely with proper attribution, author bio, and this copyright statement.