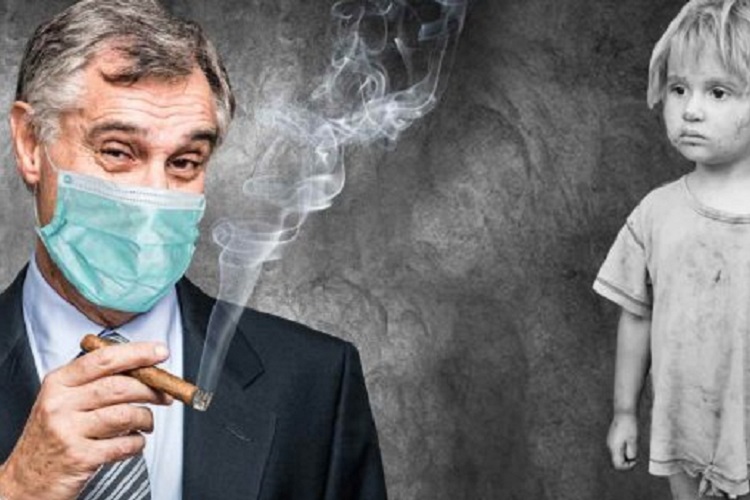 A new report from the Oxford Committee for Famine Relief has revealed that the economic recession in the wake of the world’s Covid-19 lockdown is over. That is, it is over for the wealthy elite, whom have recuperated from their financial losses in record time. Unfortunately the report states that billions of people globally will continue to feel the sting of devastating economic impacts for more than a decade to come.

The Oxfam report, titled “The Inequality Virus”, was published on the first day of the World Economic Forum’s Davos agenda meeting. It exemplifies the stark contrast of wealth inequality between the global elite and the average individual; as it indicates Covid-19 has the potential to increase economic inequality in almost every country simultaneously.

“A new global survey of 295 economists from 79 countries, commissioned by Oxfam, reveals that 87 percent of respondents, including Jeffrey Sachs, Jayati Ghosh and Gabriel Zucman, expect an ‘increase’ or a ‘major increase’ in income inequality in their country as a result of the pandemic.

Oxfam’s report shows how the rigged economic system is enabling a super-rich elite to amass wealth in the middle of the worst recession since the Great Depression while billions of people are struggling to make ends meet. It reveals how the pandemic is deepening long-standing economic, racial and gender divides.”

“We stand to witness the greatest rise in inequality since records began. The deep divide between the rich and poor is proving as deadly as the virus.”

“Rigged economies are funnelling wealth to a rich elite who are riding out the pandemic in luxury, while those on the frontline of the pandemic —shop assistants, healthcare workers, and market vendors— are struggling to pay the bills and put food on the table.

She added, “Extreme inequality is not inevitable, but a policy choice. Governments around the world must seize this opportunity to build more equal, more inclusive economies that end poverty and protect the planet.”

This latest report comes at the pinnacle of what has been the worst year for the global economy in nearly a century. But it is necessary to elaborate, the insinuation that “Covid-19” itself is the sole cause of this is missing the mark. An understanding needs to be had that the primary factor behind these untold amounts of socio-economic strife is not directly resultant of a virus with an approximate 99.75%+ recovery rate. Or that which 99.6% of those infected are in mild condition — but rather, the faulty government policy of global lockdowns.

It has been the decision of governments the world over to exercise wanton reckless abandon to bring the global market to a screeching halt. And on a consensus of what? Faulty computer coding? As many have exhaustively covered throughout this crisis, the policy for governments around the world to institute sweeping lockdown mandates has absolutely no scientific basis.

Beginning in May, first reported by The Telegraph, independent data analyst experts revealed that the Imperial College pandemic projection models were completely inaccurate. It was these models, designed by Professor Neil Ferguson, that were used as justification to begin worldwide lockdowns. Yet upon this groundbreaking news coming to light, it received almost no coverage from mainstream outlets. Analysts showed Ferguson’s models had several mathematical errors, and were ran on obsolete software. Leading experts who examined it say it could be “the most devastating software mistake of all time”. They called it “totally unreadable” & “a buggy mess that would get you fired in the private industry” and whose approach “ignores widely accepted computer science principles”.

Ultimately, Ferguson himself was forced to resign from his position at the Imperial College of London for breaking lockdown protocols. This guy had such little faith in the accuracy of his own models that he was completely comfortable disregarding his own data — with further investigation showing he has a track record of doing so. Despite this, governments around the world hastily accepted these models without first considering if it should undergo an independent peer review. The choice was made to base policy decisions that could potentially change the history of our planet as we know it on blind faith.

Notwithstanding these incredible revelations the State persisted in their evisceration of civil liberties and economies. With multiple studies since having been put forward by respected academics and experts — experts that have been largely ignored by corporate media — exhibiting time and again that the data reflects zero evidence that lockdowns were at all effective in the first place.

Unfortunately, the ineffectiveness of these policies do not come without harsh consequences of their own. It has been extensively documented by many, including The Free Thought Project contributor Gavin Nascimento, the wide-ranging deadly effects that lockdown policies can have on society. In his recent documentary titled Panic Profit & Power, Gavin painstakingly exemplifies this evidence ad nauseam while scrutinizing multiple fallacies perpetuated by the establishment narrative.

With regard to the economic state of things, the consequences are quite dire indeed. In addition to the Oxfam report, two recent reports have been released from departments within the United Nations corroborating these sentiments. The first, released on the same day as the Oxfam report, was from the International Labour Organization. Their new study indicated upwards of 255 million full-time jobs had been lost as a result of the current crisis. Showing global labor income fell by an estimated $3.7 trillion in 2020, or 4.4% of the global gross domestic product (GDP) of 2019.

Speaking to Al Jazeera, Sher Verick, head of the ILO’s Employment Strategies Unit said – “Last year was a jobs crisis of unprecedented magnitude – around four times larger than what happened during the global financial crisis,” (of 2008/09). Warning these fiscal ramifications could result in a “lost lockdown generation”, Verick said, “The income losses are relatively large for women, young people, the low-skilled and the self-employed,”. Finding that these particular groups are at the highest risk of long-term economic hardship. “A lot of young people have become inactive or dropped out of the labour force because they were contained during the crisis, and unable to go out to look for work,” said Verick.

The second UN study, published in December of 2020, was conducted by the United Nations Development Program. It warned that on a protracted trajectory the world could face a “high damage scenario” in which over 1 billion people could be pushed into extreme poverty by 2030. Anticipating that 80 percent of the pandemic-induced economic crisis would persist for over a decade. UNDP’s Administrator Achim Steiner is quoted as saying – “As this new poverty research highlights, the Covid-19 pandemic is a tipping point, and the choices leaders take now could take the world in very different directions.”

The reports conclusion indicating that global leaders must take decisive action in order for it to be possible to reverse the damage that has already been done.

However these are just a few of the litany of reports warning of the economic devastation these policies have brought upon the world. An assessment from the Institute of International Finance had also indicated that by the end of 2020 global debt would skyrocket to an unprecedented $277 trillion, while debt in advanced nations would surge 432% above GDP in the fourth quarter. Which it did. Nearly half of this was incurred in the United States, which has enacted some of the world’s most expensive covid relief packages.

The International Monetary Fund (IMF), has previously stated that the economic damages inflicted are on course to completely erase 30 years of progress in fighting global poverty.

Additionally, the director of the UN World Food Program issued a statement to the United Nations Security Council in April of 2020 warning of what he characterized as a global humanitarian catastrophe. WFP Executive Director David Beasley stated candidly;

By that time, its effects were already beginning to rear its ugly head and continued to do so as early reports surfaced of uprisings in Chile, mass starvation in India, and later as mile long food lines began popping up all over America. While this occurred, politicians steadily increased pandemic restrictions, constantly flaunting their lawlessness and ignoring them themselves — embodying the age-old assertion of megalomaniacs past: Rules for thee, but not for me.

Meanwhile a report was published by the National Bureau of Economic Research indicating that upwards of 900,000 US citizens could die as a result of lockdown policies. An article from the Foundation for Economic Education (FEE) said about the study — “Specifically, the researchers cite unemployment spikes from lockdowns and other government restrictions that were two to five times larger than typical unemployment shocks”

“Yet, the findings should not be surprising. Rising unemployment has long been correlated with higher death rates. A 1979 study concluded that for every 10 percent increase in unemployment, mortality increased by 1.2 percent. For this reason, social scientists have long argued that employment and economic growth are essential components of a healthy society.” It went on to cite multiple previous academic studies exemplifying how unemployment disproportionately negatively impacts people’s mental and physical health.

The the growing trend of economic devastation facilitated by the whim of these feckless corporate stooges we call world leaders is apparent. And as if to rub salt in the wound even further, in the midst of this travesty world financial powers such as JPMorgan have openly bragged that more lockdowns and disaster would only serve to benefit the ultra-rich predator class. Already, the elite have seen a boon of wealth consolidation as their monopolies thrive in the destruction. As TFTP reported in October they had already reveled in a $10 trillion net worth hike thanks to the pandemic.

The clear and present financial ramifications are exemplary enough. As the facts persist, objective analysis of the evidence indicates that they have fear-mongered the planet into a dystopia, while the robber barons stuff their coffers to the brim and leave the average citizen penniless and starving.

Don Via Jr. is an independent researcher and journalist from central Virginia, who has dedicated the last ten years to studying history, political science, geopolitics, and covert operations, and raising awareness about government corruption and abuses. He is the founder of the up-starting independent media outlet Break The Matrix, where more of his work can be found as well as on associated social media on MeWe, Twitter, and Minds.