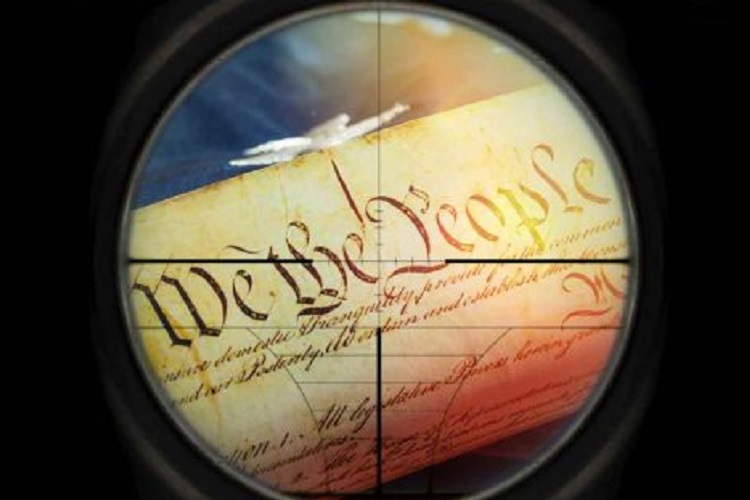 After the storming of the capitol on Wednesday, mainstream media and establishment voices began throwing around a term that should make us all pay attention — “domestic terrorism.” As the group of MAGA rioters stormed the capitol to take selfies with cops, steal podiums, and hang from banisters, president-elect Joe Biden quickly took to his platform to characterize them as domestic terrorists.

“Don’t dare call them protesters,” Biden said in remarks from Wilmington, Delaware. “They were a riotous mob. Insurrectionists. Domestic terrorists. It’s that basic. It’s that simple.”

Unfortunately, during the turmoil, a police officer was killed and a protester shot to death, as well as three other individuals, who were apparently part of the MAGA protest and died from “medical emergencies.” While it was certainly terrible, this riot does not come close to the description Biden gave it, calling it “one of the darkest days in the history of our nation.”

Really Joe? Was it?

Was it darker than that fateful day on June 1, 1921, in Tulsa, Oklahoma, when police helped terrorists murder 300 of the most successful black people in America? Was it darker than when a blood-thirsty army of U.S. Calvary members slaughtered over 500 peaceful Native Americans living in a village at Sand Creek?

Was it darker than the time at least 150 African Americans were murdered in Colfax, Louisiana after multiple white supremacist groups created a militia and attacked the Courthouse building? Was it darker than when 300 Native Americans were shot and killed in late 1890—the majority of whom were women and children—after the United States Military’s 7th Calvary Regiment surrounded a camp of the Lakota tribe along South Dakota’s Wounded Knee Creek?

Or, was it darker than the thousand lives taken by cops every year in this country?

However, in order for the government to capitalize on the capitol incident, Biden needs to keep the narrative going that these weren’t simply angry soccer moms, business owners, and veterans, with a few extremists mingled in who were willing to get violent — they were all evil domestic terrorists who represent 80,000,000 other Americans. Because that’s how you get to pass new and draconian legislation and usurp more freedoms — you stoke irrational fear.

And this is exactly what president-elect Biden is doing.

Just like Trump used the police brutality riots to justify signing an executive order authorizing up to 10 years in prison for “injury of federal property” — that will now be used against his supporters as he makes off with the millions they donated to him — Biden is using the assault on the capitol to expand the police state.

Biden came out the day after the breach of the capitol to explicitly state he has made it a priority of passing a law against domestic terrorism, and he has been urged to create a White House post overseeing the fight against ideologically inspired violent extremists and increasing funding to combat them, according to the Wall Street Journal.

As Glenn Greenwald writes, “Liberals who are behind the Biden/Harris plan to initiate this new War on Terror, this time with a primary domestic focus, won’t need to study what neocons did with the first War on Terror to learn those old tactics against critics. Neocons are their full allies in all of this.”

Greenwald points out a threatening similarity with the first war on terror and that is anyone who questioned the state’s tactics — even though they were unjust, murderous, and criminal — was still lumped in with the enemy and considered a terrorist sympathizer.

“I spent the first decade of my journalism career devoted to exposing and denouncing the excesses of the first War on Terror, and I see exactly the same tactics forming: If you question or are concerned about these new powers, you’ll be branded as sympathetic to the terrorists,” writes Greenwald.

The fact is that this has been in the works for years and the oligarchs were simply waiting for an event to trigger it. The MAGA folks played right into their hands and Wednesday will serve as a catalyst for deploying these tactics.

As we reported in 2019, the FBI classified those who share conspiracy theories online as a domestic terror threat. But it goes even further.

In fact, in spite of having no real reason to go after ‘conspiracy theorists’ and ‘patriot groups’, the government has a long history of infiltrating groups and labeling those who question the status quo as a threat. It even has a name: PATCON, short for “Patriot Conspiracy.”

Indeed, much of the police state which has risen up around the country is in response to the essentially non-existent threat from those who want to expose the crimes of the state who are labeled as extremist groups. YouTube and Google have even gotten in on the action and have moved to censor evidence of US war crimes and historical footage of war.

A police sergeant in Morgan County, Indiana admitted in May of 2014 that his department had obtained an armored vehicle in part because of returning military veterans were deemed domestic terror threats by Homeland Security in 2009.

The MIAC Report, a federal training document famously presented to Missouri police in 2009, went as far as falsely tying supporters of former Presidential Candidate Ron Paul and the Constitution to “extremist groups” as well.

In 2014, a sheriff’s deputy admitted on video that these weapons of war were needed to fend off “constitutionalists” with firearms.

It is important to point out that there are indeed extreme factions within the Trump base and other extremist groups who are white supremacists and who might carry out acts of terror. However, they are not representative of the entire pro-freedom base. Rest assured that this does not matter and anyone who questions the establishment from this point forward will be branded as an extremist, potential domestic terrorist.

While QAnon and other groups have certainly put out ridiculous claims, this push for a domestic war on terror subsequently ensnares millions of innocent people for doing nothing other than questioning their government. As stated above, there is no doubt that crazy people — who believe in conspiracy theories — carry out crazy acts. It is highly likely, in fact, that most domestic terrorists have acted based on some irrational conspiracy that they believed was real. But tens of millions of other people don’t act, and asking questions is the only way to figure out real conspiracies. This should never be considered “domestic terrorism.”

This push to criminalize questioning the almighty federal government will also be coupled with a level of censorship like we have never seen. The NY Times and other mainstream media outlets and tech giants have already begun to roll out their plans for it.

When the state ramps up this campaign of censorship, regardless of its intentions of ‘preventing threats,’ it will be used to silence everyone who the establishment disagrees with — history proves this to be the case, every single time.

Where they have burned books, they will end in burning human beings.

Because a few easily swayed individuals take tidbits of information and make brash decisions does not mean that this information should be stopped.

This move will solidify the future of the technocracy as all it does is further attack those who want peace and freedom and it does so by blurring the lines between real extremists and freedom loving activists. After all, if tyrants can associate hate and extremism with the ideas of peace and liberty—the herd will be far easier to keep under control and will have no problem voting away their rights to fight this non-existent threat.

**This article (The Government’s New ‘War On Terror’ Is Coming — This Time It’s Aimed At America) was originally published at The Free Thought Project and is re-posted here with permission.**