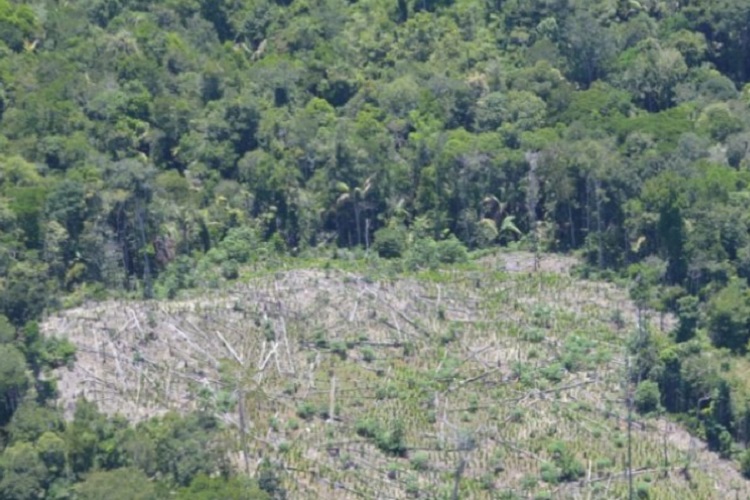 The Catatumbo River originates in northeastern Colombia’s Norte de Santander Department and flows to Venezuelan Lake Maracaibo. For generations, it has provided passage for fishermen and small farmers; but increasingly, it is being used to transport illegal good like weapons, timber and coca crops, from which cocaine is produced.

The location of the Catatumbo region sits on the border with Venezuela, making it a strategic route for armed groups such as the National Liberation Army (ELN), dissidents of the Revolutionary Armed Forces of Colombia (FARC), to traffic drugs out of Colombia. Territorial disputes over coca-producing areas reportedly happen daily, and residents say they live in fear of displacement or even death if they speak out about illegal activities connected to the region’s drug trade. Those who agreed to speak to Mongabay did so on the condition of anonymity; their names have been changed in this story.

“Be very careful with this information,” said Pablo*, a farmer.

In addition to a threatening environment for local communities, the illegal cultivation of coca and its manufacture into cocaine appears to be coming at the cost of the region’s forests. Even areas given the highest level of protection are not immune – including Catatumbo Barí National Natural Park, where satellites are detecting deforestation creeping deeper and deeper into the park’s old growth rainforest.

The rise of coca

Today Pablo cultivates legal crops, but until a few years ago he was a coca grower. He said he has watched as coca fields have expanded to the edges of the roads and banks of the Catatumbo River with total impunity, thus breaking with the old practice of growers cultivating coca in more remote, hidden areas.

“Now people burn pastures to cultivate coca that used to be destined for livestock or growing fruit … They don’t respect anything, not even the river,” Pablo said.

Pablo says that since the arrival of coca in 1997, the region has not been the same and that the situation deteriorated further after the signing of the FARC peace agreement in 2016.

“There are almost no trees left and the wells in the creeks and river where I bathed when I was a child no longer exist because of the landslides,” said Pablo, who has lived more than 50 years in the same region.

Pablo added that, ultimately, farmers have opted for the money that comes with coca cultivation over the peace of mind of growing legal crops.

“The business is not bad if you cultivate enough [coca leaves], not like the scraps I had,” he said, referencing the less-than 10 hectares (24 acres) of land he once owned. He claims that coca fields tend to be larger now, some hundreds of hectares in size.

According to Pablo, one kilo of coca paste is selling for approximately 2.7 million pesos ($790). If the buyer is someone from the guerrilla group, they sell it for 2.58 million pesos ($755). Meanwhile, the price of one kilo of cacao – a popular legal crop in the area whose cultivation has been encouraged by the government to combat the coca industry – is just 8,000 pesos ($2.30).

“The programs have only targeted families that grow illicit crops,” said Jericó, a cacao producer. “Families who do not have these crops have been displaced and are being indirectly told that they have to grow coca to be beneficiaries of the programs.”

Catatumbo Barí National Natural Park is nestled in the foothills of the eastern mountain range in the department of Norte de Santander and covers 158,125 hectares (390,735 acres) with elevations ranging from 70 to 2,000 meters (230 to 6,562 feet) above sea level. Orchids, bromeliads, lianas and heliconias predominate in the park, as well as trees over 45 meters (148 feet) tall. Its harbors part of the Catatumbo Moist Forest ecoregion, which is the only area north of the Andes inhabited by Amazonian plants and animals – and which has been heavily degraded by agriculture and oil extraction.

Catatumbo Barí is more than six hours from Cúcuta, the capital of Norte de Santander Department, and there is little, if any, passable road access. The best way to get there is by boat with the help of the Barí, the Indigenous group that occupies a sector of the park across two reservations: Motilón Barí which comprises 108,900 hectares (269,097 acres) and Gabarra-Catalaura of 13,300 hectares (32,865 acres).

Along the way to the park, fields of coca crops are easy to see.

“The crops are reaching Cúcuta,” said an inhabitant of the region.

Tibú is one of the municipalities that has jurisdiction over the park. It’s also the municipality with the highest deforestation rate in Norte de Santander. According to the latest report from the Institute of Hydrology, Meteorology and Environmental Studies (Ideam), 7,103 hectares (17,551 acres) were cleared in Tibú in 2019, representing 72% of its area.

Norte de Santander lost 11% of its tree cover between 2001 and 2019, according to satellite data from the University of Maryland (UMD), while Catatumbo Barí National Natural Park lost 6.2%. In both areas, preliminary UMD data for 2020 showing several spikes of deforestation that were “unusually high” compared to years past.

National Natural Parks of Colombia (PNN) is the environmental authority that oversees Catatumbo Barí. The areas outside the park are overseen by the Regional Autonomous Corporation of the Northeast Frontier (Corponor), which manages renewable natural resources in Norte de Santander. Sandra Gómez, deputy director of Corponor, explains that high deforestation rates outside the park are due largely to expansion of the agricultural frontier, illicit crops, illegal mining and timber trafficking.

“Entering is difficult and inaccessible because of (the lack of) roads, the ongoing conflict and security issues. All this makes illegal activities easier,” Gómez said.

The latest report from SIMCI found 1,448 hectares (3,578 acres) of coca cultivation inside Catatumbo Barí in 2019, representing 15% of the area deforested between 2001 and 2019 and a 60% jump over 2018. However, this may pale in comparison to 2020; according to a government source who studies the area, and who spoke on condition of anonymity, 90% of the deforested land in Catatumbo Barí has now been planted with coca crops, with the remaining 10% used as cropland for plantains and yucca, or as livestock pasture.

According to SIMCI figures, coca crops had reached two indigenous reservations within Catatumbo Barí as of 2019, with 411 hectares cultivated in the Motilón Barí reservation and 43 hectares in the Gabarra-Catalaura reservation. Totaling 454 hectares (1,121 acres), this marks a 66% increase in coca cultivation in the two reservations compared to 2018.

Juan Carlos Quintero, president of the Catatumbo Small Farmers Association (Ascamcat), said that coca cultivation as well as the expansion of large-scale oil palm plantations is worrying. He added that the departure of government oversight after the signing of the 2016 FARC peace deal has created an atmosphere of impunity in the region.

“The national government is only present with the army,” Quintero said, adding that armed groups soon invaded territory left vacant by the FARC and unprotected by the government.

Gómez said the situation in the Catatumbo region stems from a structural problem that facilitates land grabbing. Under a law that dates back to 1959, the government earmarked territories for forest protection; however, they did not formally register the land, which would have avoided land use disputes and help mitigate environmental degradation of protected areas.

“The problem is land grabbing and illegal land use change …  as there is no physical registration, people buy land and then cultivate coca,” Gómez said. “If it goes bad, they sell it. [These lands] are vacant lots and they belong to the nation.”

Rodrigo Botero, director of the Foundation for Conservation and Sustainable Development (FCDS), says that the Colombian government wants to officially map the tenure of all the different plots in the region, which is the first step needed to register the ownership, use, extension, occupation time and legal status of the land.

Catatumbo Barí National Natural Park has untouched areas of rainforest that are still unstudied by the scientific community. Carlos Herney Cáceres Martínez, a biologist who has done research in various Colombian parks, has tried to enter the protected area for years to conduct genetic sampling of the Andean bear (Tremarctos ornatus). The project aims to characterize the connectivity of Andean bear populations in Colombia, and from the eight different regions where its presence has been registered, Catatumbo Barí is the only area where sampling has not been yet possible due to the difficulty of accessing the park.

Cáceres said deforestation like that which is happening in and around Catatumbo Barí has cascading repercussions that can ripple through ecosystems and the human communities that depend on them.

“When a humid forest is affected, everything is affected: the capture of carbon dioxide, oxygen leveling, water regulation, erosive processes (…) Not only are plants or animals lost, as a society we are losing a free service that the planet offers us to have a healthy life,” Cáceres said. He added that fire – which is often used to clear land – can be particularly destructive to the region’s forest.

“We know that it is very difficult for them to return to their natural state,” he said. “For [a forest] to recover 50% they need at least 100 years.”

This is a translated and adapted version of a story that was first published by Mongabay Latam on December 02, 2020.