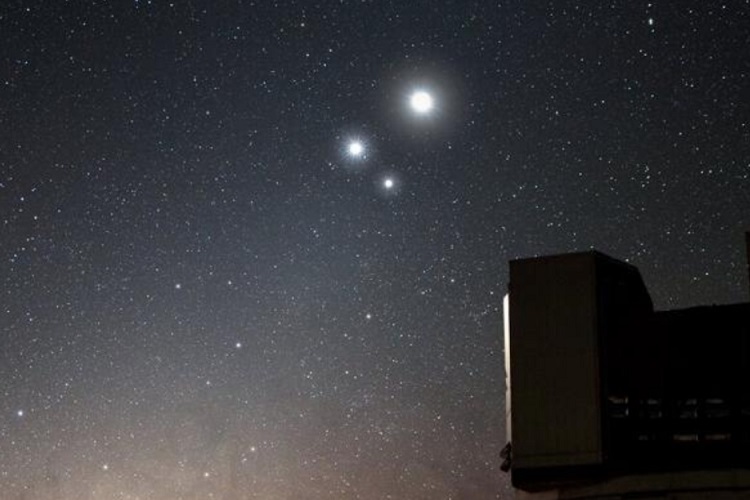 The 2020 holiday season is widely expected to be one unlike any other, due in no small part to the ongoing public health emergency. However, Christmas celebrations will also be unique due to an extremely rare planetary alignment, the likes of which have never been seen since medieval times.

Star-gazers will be in for a major treat come December 21, 2020 – the date of the winter solstice – when Jupiter and Saturn will appear extremely close to one another in our night sky, making the planets appear that they might almost collide and becoming one extremely luminous point of light.

The rare celestial treat coinciding with Christmas week will see the Solar System’s two largest planets appear as a “double planet” for the first time in almost 800 years.

“Alignments between these two planets are rather rare, occurring once every 20 years or so, but this conjunction is exceptionally rare because of how close the planets will appear to one another,” said astronomer Patrick Hartigan in a press release from Rice University in Houston, Texas.

“You’d have to go all the way back to just before dawn on March 4, 1226, to see a closer alignment between these objects visible in the night sky,” he added.

Of course, these massive planets won’t be close to one another. Consider our own planet’s distance from the sun. Astronomers use what’s called astronomical units (au) to measure distances in the sprawling expanse of our solar system. Jupiter lies 5 au from the Earth, while Saturn lies 10 au away.

Since the summer, Jupiter and Saturn have been headed towards each other in our own night sky. And from Dec. 16-25, they will appear to be separated by only less than the diameter of a full moon.

While astronomers are recommending that the best views will be seen from around the equator, if good weather permits then the alignment will be clear from any location here on Earth.

Jupiter and Saturn will also be clear during the twilight, for roughly an hour after sunset every evening. However, a telescope tilted toward the western sky will be the best way to catch a glimpse of the extremely rare event.

“On the evening of closest approach on Dec 21 they will look like a double planet, separated by only 1/5th the diameter of the full moon,” Hartigan explained. “For most telescope viewers, each planet and several of their largest moons will be visible in the same field of view that evening.”

“The further north a viewer is, the less time they’ll have to catch a glimpse of the conjunction before the planets sink below the horizon.”

Websites like Stellarium will also be helpful in figuring out where you should look for the Jupiter-Saturn conjunction.

If you don’t get a chance to catch Jupiter and Saturn this close together, you can catch the pair again relatively soon – on March 15, 2080.

However, the next time Jupiter and Saturn will be so close in earthly night skies will be in 2400.