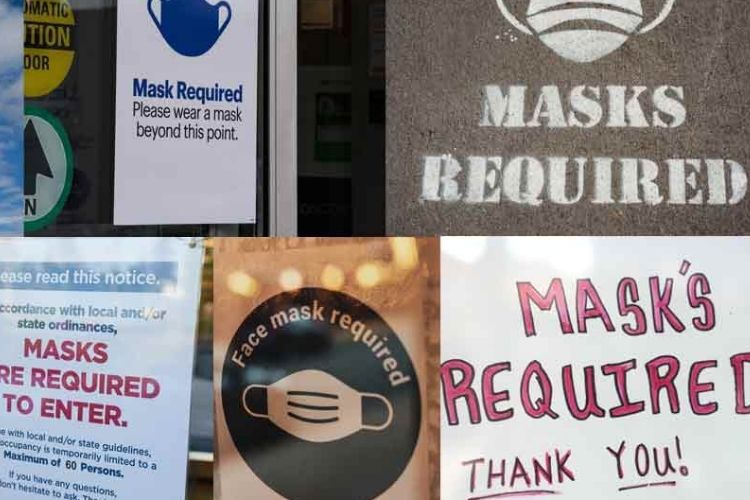 In breathless tones, NBC News recently reported1 the existence of a business where mask wearing isn’t enforced. In the Naples, Florida, grocery store, hardly anyone wears a mask. The store’s owner, who the news station claimed “is known for his conservative and often controversial viewpoints,” told a reporter he’s never worn a mask in his life and never will.

The store does have a mask policy posted, but video shows that many customers are fine with not wearing one. There is a mask mandate in Naples, but Florida Gov. Ron DeSantis has issued a ruling that makes enforcement of the rule difficult, NBC said.

The irony of the whole thing is that while the media claims mask mandates are based on science and will “save lives,” this simply isn’t true. Science is actually being ignored wholesale and recommendations are primarily pushed based on emotional justifications and triggers. If science were actually followed, universal mask wearing by healthy people would not — indeed could not — be recommended.

A Timeline of Unscientific Extremes

From the start of the COVID-19 pandemic, health experts have been unable to unify around a cohesive message about face masks. In February 2020, Surgeon General Jerome Adams sent out a tweet urging Americans to stop buying masks, saying they are “NOT effective.”2 (He has since deleted that tweet.) Adams also warned that if worn or handled improperly, face masks can increase your risk of infection.3

Similarly, in March 2020, Dr. Anthony Fauci stated4 that “people should not be walking around with masks” because “it’s not providing the perfect protection that people think that it is.” Logically, only symptomatic individuals and health care workers were urged to wear them.

Fauci even pointed out that mask wearing has “unintended consequences” as “people keep fiddling with their mask and they keep touching their face,” which may actually increase the risk of contracting and/or spreading the virus.

By June 2020, universal mask mandates became the norm and we were told we had to wear them because there may be asymptomatic super-spreaders among us. Interestingly enough, that same month, the World Health Organization admitted that asymptomatic transmission was “very rare.” If that’s true, then why should healthy, asymptomatic people mask up?

By July 2020, Fauci claimed his initial dismissal of face masks had been in error and that he’d downplayed their importance simply to ensure there would be a sufficient supply for health care workers, who need them most.5

Fast-forward a few weeks, and by the end of July 2020, Fauci went to the next extreme, flouting the recommendation to wear goggles and full face shields in addition to a mask, ostensibly because the mucous membranes of your eyes could potentially serve as entryways for viruses as well.6

This despite the fact that a March 31, 2020, report7 in JAMA Ophthalmology found SARS-CoV-2-positive conjunctival specimens (i.e., specimens taken from the eye) in just 5.2% of confirmed COVID-19 patients (two out of 28).

What’s more, contamination of the eyes is likely primarily the result of touching your eyes with contaminated fingers. If you wear goggles or a face shield, you may actually be more prone to touch your eyes to rub away sweat, condensation and/or scratch an itch.

Toward the end of November 2020, the asymptomatic spread narrative was effectively destroyed by the publication of a Chinese study8 involving nearly 9.9 million individuals. It revealed not a single case of COVID-19 could be traced to an asymptomatic individual who had tested positive.

“The logical reason for all this flip-flopping is because actual science is NOT being taken into account. From the start, the available research has been rather consistent: Mask wearing does not reduce the prevalence of viral illness and asymptomatic spread is exceedingly rare, if not nonexistent.“

Around December 2020, recommendations for double-masking emerged,9 and this trend gained momentum through extensive media coverage as we moved into the first weeks of 2021.10 Undeterred by scientific evidence and logic alike, by the end of January 2021, “experts” started promoting the use of three11,12 or even four13 masks, whether you’re symptomatic or not.

These recommendations quickly sparked a mild backlash, with other experts encouraging the return to common sense, as wearing three or more masks may impair airflow, which can worsen any number of health conditions.

True to form, while promoting the concept of double-masking as recently as January 29, 2021,14 by February 1, Fauci conceded “There is no data that indicates double-masking is effective,” but that “There are many people who feel … if you really want to have an extra little bit of protection, ‘maybe I should put two masks on.'”15 In other words, the suggestion is based on emotion, not actual science.

The logical reason for all this flip-flopping is because actual science is NOT being taken into account. From the start, the available research has been rather consistent: Mask wearing does not reduce the prevalence of viral illness and asymptomatic spread is exceedingly rare, if not nonexistent.

Both of these scientific consensuses negate the rationale for universal mask wearing by healthy (asymptomatic) people. The only time mask wearing makes sense is in a hospital setting and if you are actually symptomatic and need to be around others, and even then, you need to be aware that it provides only limited protection.

The reason for this is because the virus is aerosolized and spreads through the air. Aerosolized viruses — especially SARS-CoV-2, which is about half the size of influenza viruses — cannot be blocked by a mask, as explained in my interview with Denis Rancourt, who has conducted a thorough review of the published science on masks and viral transmission.

According to Rancourt, “NONE of these well-designed studies that are intended to remove observational bias found a statistically significant advantage of wearing a mask versus not wearing a mask.”

a. Masks may reduce your risk of SARS-CoV-2 infection by as much as 46%, or it may actually increase your risk by 23%

The study included 3,030 individuals assigned to wear a surgical face mask and 2,994 unmasked controls. Of them, 80.7% completed the study. Based on the adherence scores reported, 46% of participants always wore the mask as recommended, 47% predominantly as recommended and 7% failed to follow recommendations.

Among mask wearers, 1.8% ended up testing positive for SARS-CoV-2, compared to 2.1% among controls. When they removed the people who reported not adhering to the recommendations for use, the results remained the same — 1.8%, which suggests adherence makes no significant difference.

Among those who reported wearing their face mask “exactly as instructed,” 2% tested positive for SARS-CoV-2 compared to 2.1% of the controls. So, essentially, we’re destroying economies and lives around the world to protect a tiny minority from getting a positive PCR test result which, as detailed in “Asymptomatic ‘Casedemic’ Is a Perpetuation of Needless Fear,” means little to nothing.

CDC Relies on Anecdotal Data to Promote Mask Use

If you want additional proof that health authorities are not concerned with following the best available science, look no further than the U.S. Centers for Disease Control and Prevention.18 What do they rely on as the primary piece of “evidence” to back up its mask recommendation?

A wholly anecdotal story about two symptomatic hair stylists who interacted with 139 clients during eight days is all they offer. Sixty-seven of the clients agreed to be interviewed and tested. None tested positive for SARS-CoV-2.

The fact that the stylists and all clients “universally wore masks in the salon” is therefore seen as evidence that the masks prevented the spread of infection. The Danish study reviewed above didn’t even make it onto the CDC’s list of studies.

This too contradicts the idea that mask wearing will protect against the infection, and is probably a slightly more reliable indicator of effectiveness than the anecdotal hairdresser story.

The CDC also contradicts its own conclusions that masks protect against viral spread by specifying that wearing a cloth face mask will NOT protect you against wildfire smoke, because “they do not catch small, harmful particles in smoke that can harm your health.”23 To get any protection from harmful smoke particles, you’d have to use an N95 respirator.

SARS-CoV-2 is also about half the size of most viruses, which tend to measure between 0.02 microns to 0.3 microns.25 Meanwhile, virus-laden saliva or respiratory droplets expelled when talking or coughing measure between 5 and 10 micrometers.26

N95 masks can filter particles as small as 0.3 microns,27 so they may prevent a majority of respiratory droplets from escaping, but not aerosolized viruses. Influenza viruses and SARS-CoV-2 are small enough to float in the air column, so as long as you can still breathe, they can flow in and out of your respiratory tract.

The following video offers a simple demonstration of how masks “work.” Or rather, don’t, as the vapor flows in and out, all around the mask — even if you’re wearing two of them.

@chadroyvermontPsychrometric’s Visualized we show you what Science has missed . Take a deeper look into this Science it will help stop Covid!#science #school #fyp♬ original sound – user579705

If you’re still on the fence about whether masks are a necessity that must be forced on everyone, including young children, I urge you to take the time to actually read through some of the studies that have been published. In addition to the research reviewed above, here’s a sampling of what else you’ll find when you start searching for data on face masks as a strategy to prevent viral infection:

Statistics Show Mask Use Has No Impact on Infection Rates

Another way to shed light on whether masks work or not is to compare infection rates (read: positive test rates) before and after the implementation of universal mask mandates. In his article,36 “These 12 Graphs Show Mask Mandates Do Nothing to Stop COVID,” bioengineer Yinon Weiss does just that.

He points out that “No matter how strictly mask laws are enforced nor the level of mask compliance the population follows, cases all fall and rise around the same time.” To see all of the graphs, check out Weiss’ article37 or Twitter thread.38 Here are just a select few to bring home the point: 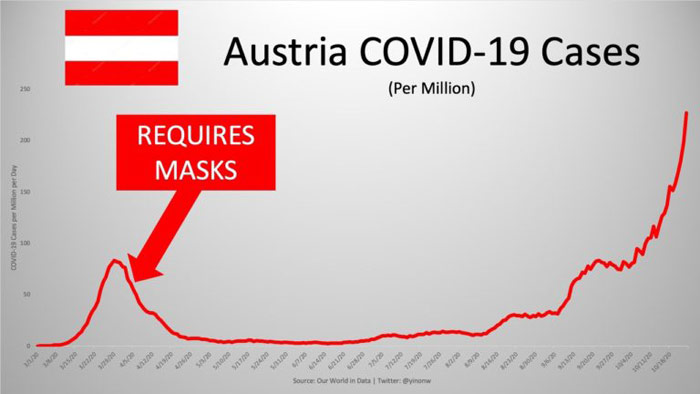 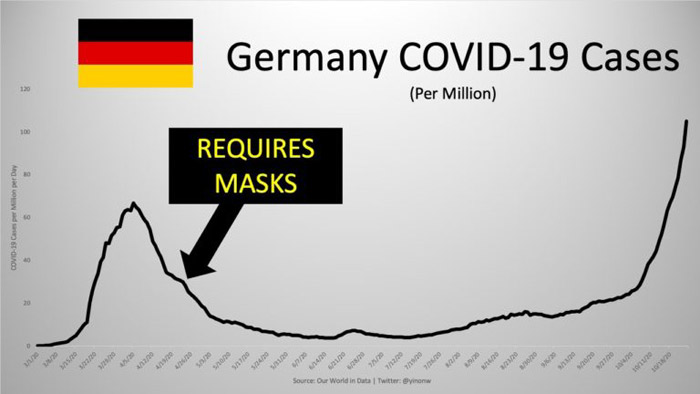 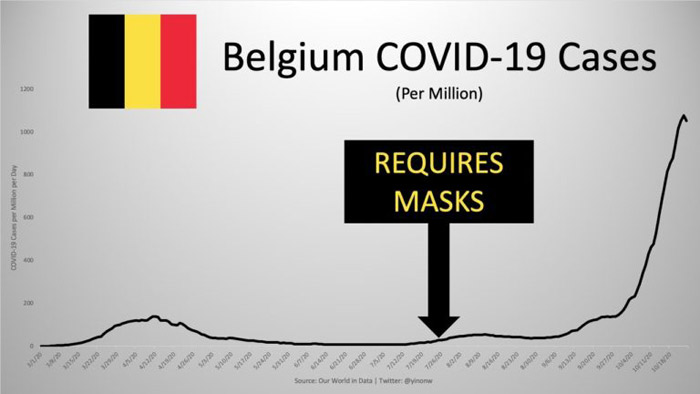 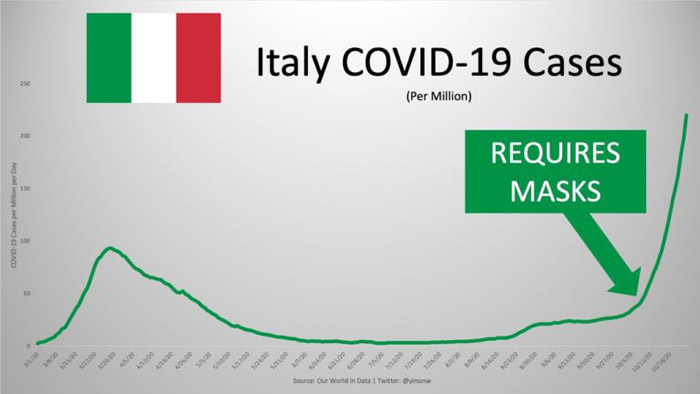 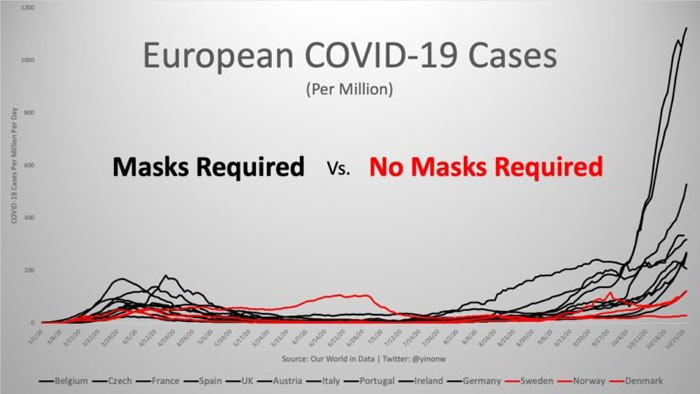 To Pose a Risk, You Need To Be Symptomatic

Studies have repeatedly shown that masks do not significantly reduce transmission of viruses, so it’s safe to assume that a mask will in fact fail in this regard. That leaves two key factors: There must be a contagious person around, and they must be sufficiently close for transmission to occur.

We now know that asymptomatic individuals — even if they test positive using a PCR test — are highly unlikely to be contagious.39 So, really, a key prevention strategy for COVID-19 seems to be to stay home if you have symptoms. As for masking up when you’re healthy, let alone double, triple or quadruple masking, there’s simply no scientific consensus for that strategy.

COVID-19 is just the beginning, but there is still hope. I urge you to take a stand now for future generations.