Charity Builds Dozens Of Tiny Homes For The Homeless, Cops & Gov’t Destroyed All Of It 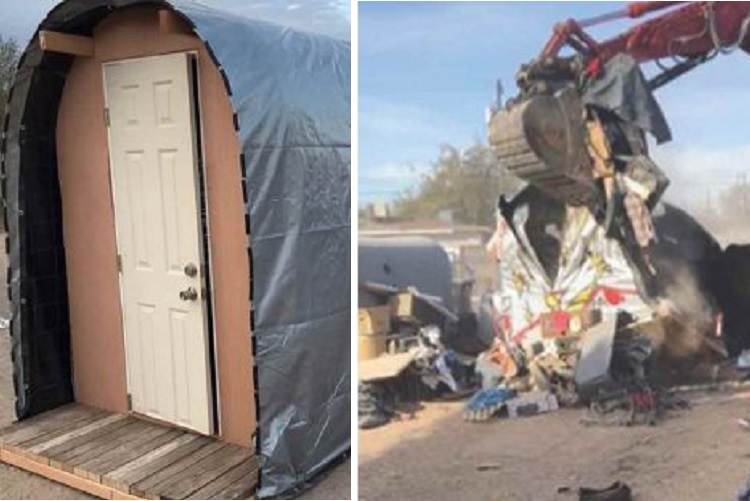 Several months ago, the Free Thought Project cofounders made a small donation to the groups Food Not Bombs and the Sidewalk Project who were raising funds to build tiny homes for the homeless in Las Vegas. The group raised $16,000 and built 26 tiny homes for for people who had previously been living on the streets. It was an amazing feat put together by a handful of caring people trying to better their community. But thanks to the City of North Las Vegas government, the tiny homes are no longer.

Police and city officials raided the camp last week and destroyed all the homes. All the hard work and dedication of the volunteers was wiped away in an instant, along with all the personal belongings of the ones living there.

“Last week our local government destroyed the Houseless encampment we were building tiny homes for, that you both donated to help build,” Joey Lankowski, who does homeless outreach with Food Not Bombs, told TFTP. “They destroyed all 26 homes we built.”

The City of Las Vegas claimed that the destruction of the homes was just as they maintain “this right of way for NDOT, the property owner.” Officials claimed that destroying the homes was necessary for “the safety of those staying there and to the surrounding homes and businesses” because of trash build up and two alleged crimes they claim are tied to the encampment.

But Lankowski says the government was threatened by the encampment because it was a self-sustaining community. In an interview with NPR, Lankowski explained why this place was so important.

Lankowski said the city of Las Vegas doesn’t want people camping downtown and Clark County doesn’t want them sleeping on the Strip. So, the area, which has been used by homeless people for a long time, is a good place to be.

In addition, there is a natural spring that allows people to get fresh water. Lankowski and his group envisioned a self-sustaining community at the encampment.

They had a plan to put solar panels on the tiny huts for power, start gardens for free food, install compostable toilets for waste management and divert the spring for more water.

“Free food, free water, free energy, free housing,” he said, “It really was going to be something beautiful and completely self-sufficient, self-sustaining and I think that’s what really scared the government.”

Now, these folks, who had a place to keep their belongings as they attempt to get back on their feet, are back on the streets looking for a place to go — ensuring unsafe conditions for all of them.

As for the trash build up, Lankowski said they had dumpsters on the site, but then the city stopped emptying them, which created the build up.

“That’s how we knew a raid was coming, even before they told the residents, is that they would stop servicing the dumpsters and then trash would accumulate and then they could point to the trash and say, ‘See, this is why we had to come in,’” he said, “It was a completely state-created problem and such an easy fix, just do your job – just service the dumpsters.”

Sadly, it’s not just the homes that were lost in the raid. Residents of the encampment were not allowed to grab their belongings, so that was all destroyed as well.

“It’s not about the financial stuff, because I’m a hustler and can go get that stuff,” one man said. “It’s my father’s watch, who is deceased. It’s my mother’s last picture. My birth certificate. Who answers for that?”

Because the government was behind the raid, no one will be answering for it.

“Imagine trying to get off the streets all these hoops you have to jump through and you’re so proud of yourself that you’re able to get these documents. You’re finally ready to get help and then all of it gets thrown away,” Lankowski said, “That sense of helplessness and hopelessness is renewed and that’s what I saw that day.”

Adding to the egregious nature of the destruction of the tiny homes is the fact that is goes against the Centers for Disease Control and Prevention guidelines. Destroying encampments like this one creates many problems, so the CDC recommends doing the opposite of what city officials did.

If individual housing options are not available, allow people who are living unsheltered or in encampments to remain where they are. Clearing encampments can cause people to disperse throughout the community and break connections with service providers. This increases the potential for infectious disease spread.

Perhaps this is the reason they didn’t want anyone to film the destruction. Lankowski tells TFTP that he was arrested that day for filming police and government officials destroying the homes.

Food Not Bombs Las Vegas has since issued a list of demands from those who have been uprooted by the destruction of the homes.

1. Land
We want land granted to us so that we can create a fully self-sustaining community for our unhoused neighbors. #HousingIsAHumanRight #HousingIsHealthcare
2. Public Apology
Mayor John Jay Lee, Mayor Goodman, Councilman Crear, Councilman Black, and the head of NDOT must issue an apology including restorative action steps to all parties victimized by Monday’s raid.
3. Make The People Whole
Replace all documents, medications, and belongings stolen by the cities of Las Vegas and North Las Vegas. Monetary compensation must be given for all destroyed belongings that can not be replaced.
4. Restore All Community Raised Funds
Repay the $16,000 worth of community funds used to build the 26 tiny homes that were destroyed so they can be rebuilt, and the residents rehoused.
5. #PovertyIsNotACrime
Repeal any and all laws criminalizing the poor, i.e. the camping ban, vagrancy, panhandling, loitering, etc.
6. #HousingNotHandcuffs
Drop all charges against members of our community, especially those relating to homelessness as well as any charges made against activists for defending the unhoused, i.e. trespassing, possession of a shopping cart, remaining in a park after hours, etc.
7. #ServicesNotSweeps
Immediately end encampment demolitions. Stop evicting the unhoused in Las Vegas and destroying their homes. Use resources to help people, not hurt them. #StopTheSweeps
8. #FreeThemAll
Release all incarcerated persons currently being held for charges relating to homelessness.
9. #NothingAboutUsWithoutUs
All future decision making regarding the unhoused in Las Vegas will include the voices and participation of the unhoused.

We agree. If you’d like to support the group in their rebuild, you can do so at this link.

**This article (Charity Builds Dozens Of Tiny Homes For The Homeless, Cops & Gov’t Destroyed All Of It) was originally published at The Free Thought Project and is re-posted here with permission.**