3 Ways Human Psychology is Being Exploited to Create an Obedient, Self-Policing Society 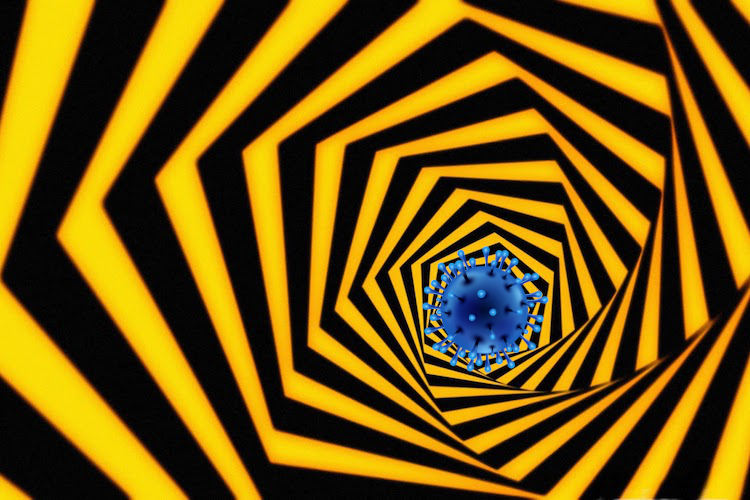 Things are changing. Rapidly. So, get used to it, and don’t look back, because as we march into this brave new world together, the pressure and stress of the situation is going to affect people’s mental health and personalities in more dramatic ways.

The human psyche is built to withstand only a certain amount of pressure, and in our over-connected world, during a global crisis, the stressful stimuli we’re soaking up in a single day is astronomical. The mind has a few coping mechanisms, like fight or flight, cognitive dissonance, denial, Stockholm syndrome, etc., but in a time like this, you’re likely to experience it all.

As the chronic stress grinds on, with no end in sight, it wears us down emotionally, physically, and mentally, and in this state we regress into more habitual, subconsciously driven behaviors, and the mind becomes very easy to manipulate. To the interrogator or torturer, sustained stress is the key to unlocking the mind and the key to creating obedience and conformity.

READ: Hypnotist Uses Neuro-Linguistic Programming to Get Out of Speeding Ticket

The scientific study of the mass mind has become an integrated tool of the economy and the state. Edward Bernays laid the groundwork for this. He was Sigmund Freud’s nephew, and in a few classic publications like Propaganda and Crystallizing Public Opinion, he articulated his theory that the mass mind can be controlled to an extraordinary degree.

“The conscious and intelligent manipulation of the organized habits and opinions of the masses is an important element in democratic society. Those who manipulate this unseen mechanism of society constitute an invisible government which is the true ruling power of our country. We are governed, our minds are molded, our tastes formed, and our ideas suggested, largely by men we have never heard of…. It is they who pull the wires that control the public mind.” ~Edward L. Bernays, Propaganda (1928)

In the preface to A Brave New World, Aldous Huxley warned us that a minority interest in our world was deliberately and successfully exploiting the mass human mind for the interests of commerce and politics.

There has been a sustained, century long effort to crack the code of the mass mind, which today includes all of the tools of technology, media and social media. In the midst of the Covid-19 crisis, in the most divisive period in modern American history, some of the more dangerous aspects of human psychology are taking root in the mass mind.

When people are told what to do by an apparent authority figure, they will even go so far as to harm and even kill another.

“Ordinary people, simply doing their jobs, and without any particular hostility on their part, can become agents in a terrible destructive process. Moreover, even when the destructive effects of their work become patently clear, and they are asked to carry out actions incompatible with fundamental standards of morality, relatively few people have the resources needed to resist authority.” ~Stanley Milgram, The Perils of Obedience, 1974

In the Covid-19 reality, the masses are being deliberately directed toward one set of experts and influencers, and and directed away from other credible but contrarian perspectives. Those today who believe in mainstream authority are taking franchise in bullying, harassing, censoring, and threatening those who would prefer to be neutral or contrarian.

Coverage of this experiment is seen below:

Furthermore, the official enforcers of new Covid policies present more concrete examples of how this dynamic plays out. Recent footage from Australia shows a male cop choking a woman for improperly wearing a mask, and around the world those obeying the rules are increasingly violent and callous towards those not obeying.

There’s also this video of a woman telling two young children she hopes they die for not wearing masks:

Dr. Phillip Zombardo conducted another well-known study on social authority in 1971. In what is known as the Stanford Prison experiment, students at Stanford University answered an ad to participate in a research study with the aim of studying the psychological effects of becoming a prisoner or a prison guard.

The group of prisoners were humiliated, searched, deloused, and locked up, humiliated, taunted and abused.

“A degradation procedure was designed in part to humiliate prisoners and in part to be sure they weren’t bringing in any germs to contaminate our jail.” ~Stanford Prison Experiment

They were issued uniforms, ID numbers, had their hair covered with a nylon stocking, and had one ankle bound in a heavy chain, thus masking their personal identity and stripping it away.

“The process of having one’s head shaved, which takes place in most prisons as well as in the military, is designed in part to minimize each person’s individuality, since some people express their individuality through hair style or length. It is also a way of getting people to begin complying with the arbitrary, coercive rules of the institution. The dramatic change in appearance of having one’s head shaved can be seen on this page.” ~Stanford Prison Experiment 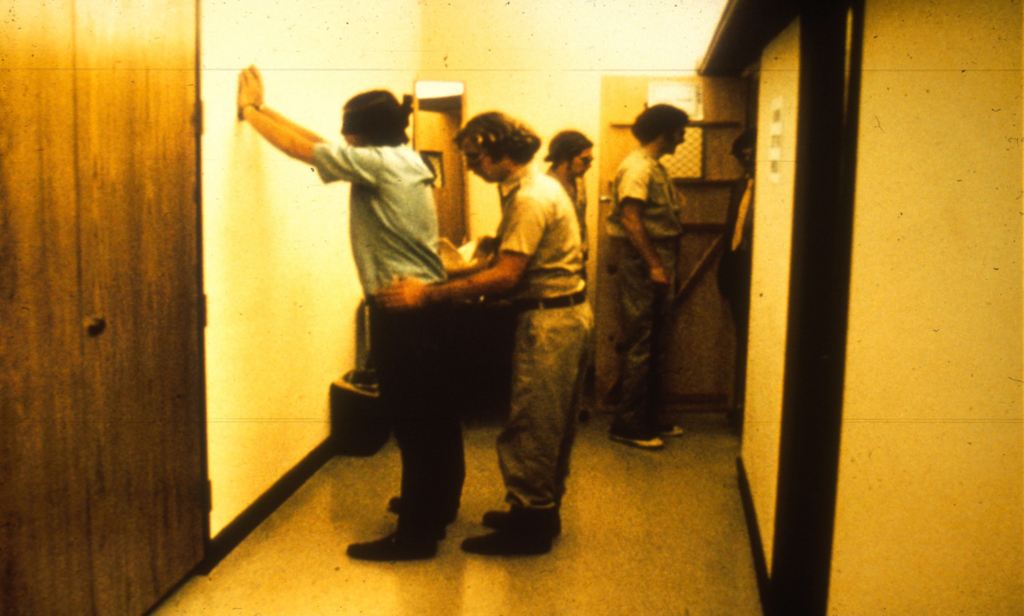 The guards were given no specific training, and were free to do whatever they felt was necessary to maintain order. They were dressed in khaki uniforms and sunglasses, and given whistles and billy clubs with which to harass the prisoners at all hours of the day.

The full story of this experiment is fascinating, but the short version is that in no time the guards found all kinds of ways to tease and punish the prisoners, and the prisoners attempted rebellion only to be suppressed and ultimately reduced to withdrawn, emotionally unstable behavior.

The dynamic of power and powerless was clearly defined and the prisoners coped with it in a variety of ways.

“At first, some prisoners rebelled or fought with the guards. Four prisoners reacted by breaking down emotionally as a way to escape the situation. One prisoner developed a psychosomatic rash over his entire body when he learned that his parole request had been turned down. Others tried to cope by being good prisoners, doing everything the guards wanted them to do. One of them was even nicknamed “Sarge,” because he was so military-like in executing all commands.” ~Stanford Prison Experiment

Watch a documentary on this experiment here:

Today, with lockdowns around the globe the masses have assumed the role of prisoner, forfeiting their individual identity and discernment. Most people go along to get along, but many are assuming the role of prison guard, attacking and harassing those who, for whatever reason, choose not to comply with new mandates about masks and other arbitrary Covid restrictions.

This recent video of a woman throwing hot coffee in the face a guy who was not wearing a mask is telling:

3. When people are put into a doctor/patient relationship as the patient, they will develop a sense of helplessness and powerlessness.

The doctor/patient relationship is perhaps the most economically and psychologically exploited relationship in society today. It is the foundation of big pharma’s grip on modern medicine, and it is big business. The influence doctors have over patients is total, and our society is being reshaped with the masses being positioned as patients whom must defer all medical decisions to an elite class of approved doctors and experts.

In a short film, Amazing Polly explains how the medical establishment’s invasion into our bodies amounts to torture and is historically one of the most dangerous forms of psychological control. Not only does it disempower the patient, it also over-glorifies the doctor, who then has an incentive to assert more dominance over the patient.

We’re seeing a manifestation of Munchausen syndrome on mass level, as the populace is kept ill by palliative care and held hostage by the vaccine industry. Rather than being empowered to protect ourselves by caring for the body and the immune system, we are being told to wait helplessly for a vaccine.

This is well laid out in the following video:

One of the most important observations made about the Stanford Experiment is that during the whole thing, not one person realized the changes in their own personality. They were said to have been so wholly wrapped up in the experience, that neither the guards nor prisoners could see the whole picture of what was happening and how they were all changing together.

Which is precisely what is happening now as these psychological dynamics are put into play at the mass level. In response to the new and chronic stressors in our lives, we are re-organizing ourselves to conform, be obedient and be self-policing.

“…the fundamental point is that tyranny does not flourish because perpetrators are helpless and ignorant of their actions. It flourishes because they actively identify with those who promote vicious acts as virtuous. It is this conviction that steels participants to do their dirty work and that makes them work energetically and creatively to ensure its success.” – Haslam and Reicher

Most people don’t see it. Are you paying attention?

This article (3 Ways Human Psychology is Being Exploited to Create an Obedient, Self-Policing Society) was originally created and published by Waking Times and is published here under a Creative Commons license with attribution to Dylan Charles and WakingTimes.com. It may be re-posted freely with proper attribution, author bio, and this copyright statement.