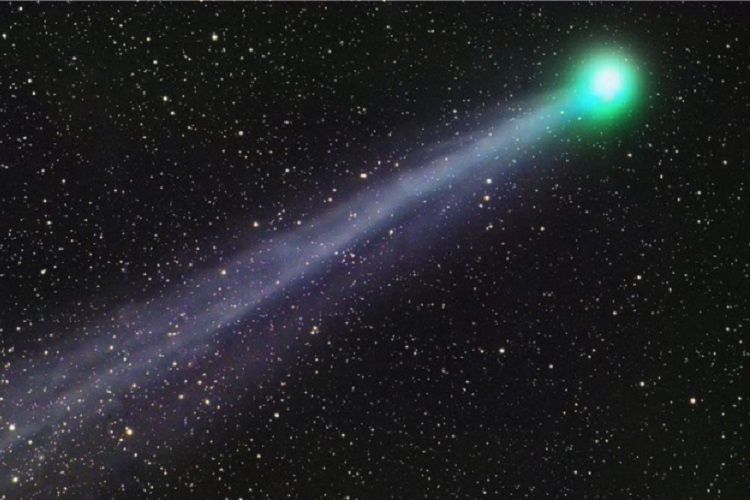 A brilliant bright-green comet with an incredible 11-million-mile long tail will be visible from Earth all week as it makes its once-in-11,597 years trip through the inner solar system.

The massive comet, named Comet Swan or C/2020 F8, is comprised of space dust, ice, and gas and will be flying past our own planet before getting close to the sun and making its way back through the solar system.

But what makes this one more special than most is the fact that the super bright green comet can be seen by the naked eye, albeit only in a “faintly visible” way, according to the European Space Agency (ESA). However, stargazers who hope to see the magnificent display will be able to get a much better glimpse using only binoculars.

The excited wagging of Comet SWAN's ion tail. Photos by Gerald Rhemann, taken over the first 5 days in May. https://t.co/sCvcXsGIdf pic.twitter.com/bf8D3yRwa1

Comet Swan was discovered in April by Michael Mattiazo, an astronomer from Australia.

The space rock’s bright green tinge comes from the water vapor released into by its icy core as it’s heated by the Sun, forming a hydrogen cloud that surrounds it and gives off its bright light.

As the European Space Agency said:

“The comet’s vigor could be significant for observers on Earth. The more material ejected from the comet, the more sunlight it reflects and the more visible it becomes. Currently moving from the southern to the northern skies, it is just faintly visible to the naked eye, but current estimates suggest that, by the end of May, it could be significantly brighter – if it survives that long.”

Swan is currently about 53 million miles away from our own planet at the moment, and the snowball is predicted to come closest to Earth on May 27. However, comets are such fragile bodies that they tend to fall apart as they come closer to the Sun – a phenomenon common in our solar system, which also occurred last month and foiled expectations that Comet ATLAS would also become very bright.

Current estimates suggest that it could start becoming much brighter if it manages to survive until the end of May, making its way from southern to northern skies. This is because the comet will be ejecting material as it warms up en route toward the Sun, reflecting sunlight and increasing in its visibility.

Comet SWAN has gotten a bit higher for my location in southwest Alabama. So here it is through trees!
SWAN revealed some of the tail. Image Richard Pickard. pic.twitter.com/hUHcDWoPqF

However, amateur astronomer David Blanchflower said that the comet won’t be as easy to see as simply gazing up into the night sky. He told the Express:

“From the UK it will be low on the eastern horizon before sunrise. Won’t be easy to spot. Binoculars rather than naked eye would give someone the best chance of seeing it.

“Into next month it will have a better elevation but not predicted to be very bright so again binoculars or a small telescope would be needed.”

The more material ejected from the comet as it warms up on its way towards the sun, the more sunlight it reflects and the more visible it becomes.

Actually seeing the comet in the twilight skies before dawn will also be made difficult by the fact that the sky is currently lit-up by a bright moon.

Comet Swan will also be difficult to see for those living in the mid-latitudes of the north, with the best views being seen low in the northeastern sky.

“By ‘low’ they mean ‘really low’ unless you’re far south like Hawaii or southern Florida. The comet gets higher as dawn breaks, which means it’ll never appear in a dark sky for mid-northern observers. Boo hoo!”

With the comet last appearing near the Earth perhaps around the same time when woolly mammoths were rendered extinct, nearly 12 millenia ago, this will be “almost certainly the only time the comet will be visible in our lifetimes,” according to the ESA.

It bears repeating that while comets have long been subject to misperceptions borne of superstitious beliefs, these distant snowballs pose absolutely zero danger to terrestrial life.