Global Crisis – Messages from Meetings with the Plants 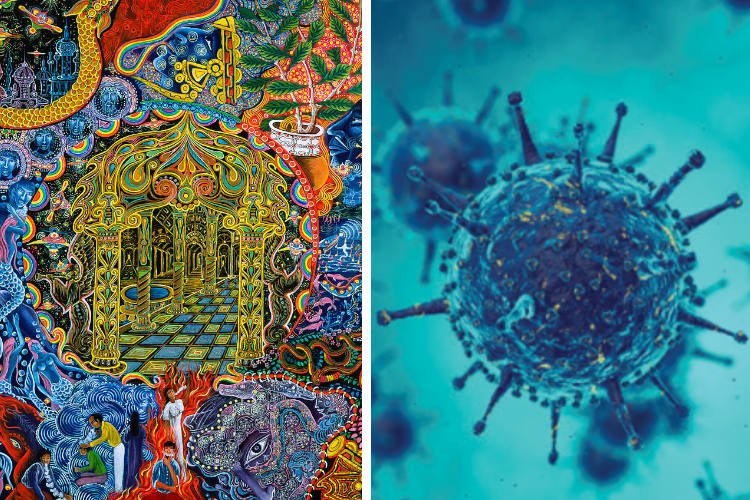 I sometimes wonder what effect the presence of shamanic plant medicines and other psychedelic or entheogenic substances have truly had on Western culture.

While journeys with these medicines are such deeply personal and healing experiences, our world is shaped by the conduct of all individuals combined. As so many individuals transform, there must be some larger effect on our world. When will we see it manifest?

Those who’ve had the calling and the courage to step into sacred ceremony tend to carry these experiences with them for a long time, processing them, integrating them, and continually learning from the awarenesses they offer.

In a universal sense, the big message feels like a calling or an invitation, to awaken from the trance of contemporary culture. It’s a challenge to prioritize connection to nature and to source, to place a higher value on life, to see through separation, and above all to heed the call to be of service.

It always vibrates with the frequency of undeniable truth.

In 2013, author Rak Razam presented our dilemma this way:

In 2018, author and researcher Graham Hancock received this insight from Ayahuasca, sharing it with the world in an urgent message:

“…Our species seems close to tearing itself apart and rendering the Earth uninhabitable in the process.

What fools we are to allow such a state of affairs to persist, and to allow politicians and religious mis-leaders – for their own short-term gain — to divide us from one another in order to rule us.

Brothers and sisters, wherever we are, no matter on which land or under which political or religious system chance brought us to be born, the time has come to awaken from this nightmare of our own making and remember the truth about ourselves — that we are all members of one family, no matter how widely scattered, that none of us have the slightest justification to claim superiority over any other, and that we all share the same hopes, fears, courage, fragility and capacity for love.

United we stand. It is just plain madness to continue to allow ourselves to be divided and defined by the artificial barriers of nation, race or creed. We must remember our common humanity, remember that we are one family, and put that realisation first before all other considerations if our species is to survive the challenges of the coming years and return once again to being good stewards of this precious garden of a planet.” ~Graham Hancock

Ethnobotanist and author Jonathon Miller-Weisberger in 2015 wrote about integral salvation as the message of the plants:

“Because our modern way of life is failing us and Mother Earth, we need to design a new operating system that will encompass everyone and everything, and guide us all back to a harmonious co-relationship with each other and with nature. There is no other choice, nothing else will work at this point, and this is precisely what the sacred plants teach, and why their message is resonating with so many in these times.

Sacred plants and especially the entheogenic plants such as Ayahuasca and Yagé, Iboga, San Pedro Cactus and Peyote, among others, ask us to reach towards an integral salvation, which means we cannot achieve salvation of our own self, but rather that we must reach towards the salvation of all nature and all life.

It is imperative that we raise our vibrational level, and be ready always to serve at whatever level is within our reach. For some, simply smiling is the best they can do, and it is necessary as it uplifts people’s energy around you… In any of the many manifest forms that this can take, we must awaken to a universal culture of service that sees other’s joys and other’s sorrows as if they were our very own. This is how to dissolve the illusory boundary of separation between ourselves and the rest of creation.” ~ Jonathon Miller-Weisberger

As a collective, we’re missing something. Something big. It’s happening all around us and we should be able to see it, but our perception of reality is limited by the clouds we live in. What we’ve created is not working, but we don’t see it.

“…These shamanic medicines are swiftly working their way into the consciousness of the modern, ‘civilized’ world at a time when the planet is under severe ecological assault and the individual is bombarded with fear, polluted with toxic foods and a toxic environment, and suffering from dreadful mental and emotional health.

We have largely lost our connection to the divine, to the source of life and consciousness and to the very earth that sustains us. Whereas ancient cultures communicated directly with nature to gain the necessary wisdom to live by, we have convinced ourselves that nature is here for our exploitation.” ~Dylan Charles

In these challenging times, when the house of cards we’ve built is collapsing, I appreciate reminders like these which elevate my awareness so that the big picture can be seen.

We have a tremendous opportunity in front of us.

Earlier today I came across the following post from Paul Stamets, the legendary wizard of all things fungi. I felt a rush of remembrance and was lifted out of my thoughts. And I smiled. In the video he shares something he learned in a particularly strong psilocybin journey:

“I realized, Oh My God, we are all One. We are all connected. We are individuals within one giant organism. The concept of Gaia… is this feeling of self obvious truth, of interconnectedness, and the fact that we’re all part of the same inter-molecular, connected entity. And that the voices called out to me to say, ‘wake up, don’t you see? You are in such a uniquely cherished position, as the ascended species, but with that you have a responsibility. What are you going to do? What is your responsibility? How are you going to help this planet, beyond your lifetime? You were given the gift of life, and a voice, and a body. Millions of people died before us. Billions of people will die after us, but this is our moment in time. Take this responsibility as a cherished opportunity to be able to make a positive difference for the commons.

And what is your legacy in the context of nature? And I think it’s a call to arms, and that’s what we’re seeing now. It’s a call to arms for everyone on this planet to come together. Across political borders, boundaries of countries. Realize that we share a universal consciousness with nature together.” [Source]

Real change starts with a COLLECTIVE shift in consciousness, a realization that we are ONE.Be a part of that deeper conversation with Paul Stamets, Director Louie Schwartzberg and many other changers during our Shift in Consciousness Q & A, 1pm PT/ 4pm ET on #FungiDay April 21st. Watch the film now and sign up here: https://bit.ly/39PlWWw #FantasticFungi #EarthDay #WeAreTheChangers

“The essence of the earth has risen again. It has risen inside me. It has the potential to rise inside you, as it resides within us all. And it must be unleashed, “painfully and passionately” lest things –bees; oceans; monarch butterflies; people– collapse into an unhealthy state of existence. This is the essence of sacred activism. This is the lighting of the third fire: each of us realizing that we are a force of nature first and a person second.” – Gary ‘Z’ McGee

I hope this finds you well and in peace, and that in spite of such magnificent chaos you somehow find a way to look forward to overcoming and learning from the challenges we all face together, right now.

This article (Global Crisis – Messages from Meetings with the Plants) was originally created and published by Waking Times and is published here under a Creative Commons license with attribution to Dylan Charles and WakingTimes.com. It may be re-posted freely with proper attribution, author bio, and this copyright statement.