Trump Tells America the U.S. Military is Preparing to Vaccinate “Most Of Our Population” by the End of the Year 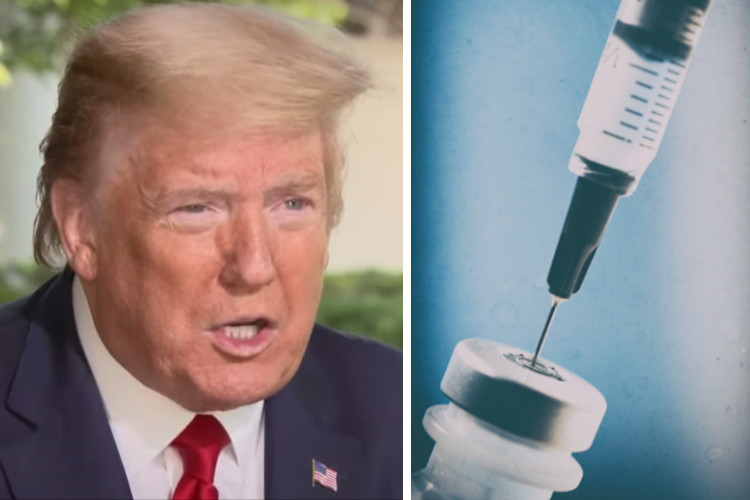 The endgame of the global Coronavirus pandemic is beginning to come into view, and in addition to a quantum leap forward in mass surveillance and tracking and tracing individuals, it will also include a rushed, mass vaccine, and as President Trump just told America, will be administered in the U.S. by the military.

In a recent interview with Fox Business’ Maria Bartiromo, President Trump echoed recent statements made by Bill Gates, who is telling the world we have to vaccinate “7 billion healthy people’ in order to ‘return to normal.’

During Trump’s interview, Bartiromo inquired about the possibility of America returning to normal.

Bartiromo: “Can we get to a place where the White House is, and corporate America, where every time you go to work you just get your temperature taken, you get a test, is that where we’re going?

Bartiromo: “When do you think we can get back to that Mr. President?”

Trump: “I think we’re going to have a vaccine by the end of the year, we’re doing very well with a vaccine, and I will tell you something I just literally left a meeting, we’re mobilizing our military, and other forces, but we’re mobilizing our military on the basis that we do have a vaccine, you know it’s a massive job to give this vaccine, our military is now being mobilized so at the end of the year we’re going to be able to give it to a lot of people very, very rapidly, I just had that meeting.”

Bartiromo: “And you’re just doing something with syringes as well, so that you can have, uh, it plentiful, you have enough vaccine.”

Trump: “We will have tremendous force, cuz, assuming we get it, then you have to distribute it, and unless you’re mobilized and ready you’re not going to be able to do it for a long time, so we’re starting now. We’re of the assumption that by the end of the year we’re going to have a vaccine, and then we have to be able to give it, to use it on most of our population.

Now, we’ll focus on elderly, we’re going to focus on nursing home and, you know, senior citiizen centers, because that’s really, if you look at it, that is so, that is a very vulnerable group, it’s a terrible thing, but, so we’re going to be focused on them.” [Source]

The full interview with Trump and Bartiromo can be seen below:

This news comes at a time that mainstream media is reporting that vaccines may not ever work for Coronavirus, that the virus has already mutated, that a vaccine may not even be possible, and that we may need multiple vaccines for what is being called Covid-19.

Either way, a rushed through product injected into hundreds of millions, or billions, of people without any long-term testing whatsoever is insanely dangerous. And in this case, Bill Gates is already warning us that a Covid-19 vaccine will use new RNA vaccine technology, which actually permanently alters the genes of anyone who takes it. This represents an even bigger human experiment.

Here’s a quote directly from Bill Gates on an RNA Covid-19 vaccine:

“Our foundation—both through our own funding and through CEPI—has been supporting the development of an RNA vaccine platform for nearly a decade. We were planning to use it to make vaccines for diseases that affect the poor like malaria, but now it’s looking like one of the most promising options for COVID. The first candidate to start human trials was an RNA vaccine created by a company called Moderna.

Because RNA vaccines let your body do most of the work, they don’t require much material. That makes them much faster to manufacture. There’s a catch, though: we don’t know for sure yet if RNA is a viable platform for vaccines. Since COVID would be the first RNA vaccine out of the gate, we have to prove both that the platform itself works and that it creates immunity. It’s a bit like building your computer system and your first piece of software at the same time.” ~Bill Gates, Gate’s Notes

And to make matters even more insane, Trump is reportedly about to assign a former executive of  GlaxoSmithKline, Moncef Slaoui, to lead the national push toward development and deployment of an experimental Covid-19 vaccine.

Moncef Slaoui, a former GlaxoSmithKline executive, will lead “Operation Warp Speed,” Trump’s push to accelerate the vaccine development process for COVID-19, according to an administration official. Slaoui is to serve in a volunteer capacity, and will be assisted by Army Gen. Gustave Perna, the commander of United States Army Materiel Command.” [Source]

Glaxo Smith Kline in n2018 was fined $289 million by China for a bribery scandal, so, if you think is all sounds too risky and even diabolical, rest assured, you are not alone.

It remains to be seen what restrictions or punitive measures will be taken against Americans who refuse the vaccine.

This article (Trump Tells America the U.S. Military is Preparing to Vaccinate “Most Of Our Population” by the End of the Year) was originally created and published by Waking Times and is published here under a Creative Commons license with attribution to Isaac Davis and WakingTimes.com. It may be re-posted freely with proper attribution, author bio, and this copyright statement.