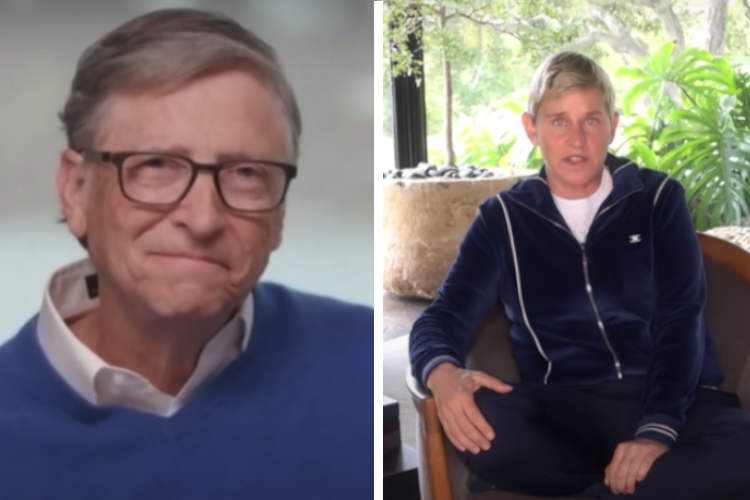 While millions of Americans suddenly find themselves jobless and broke, Bill and Melinda Gates just purchased a $43 million dollar home near San Diego, California, along with an $18 million dollar house in Santa Fe. When he’s not buying extra mansions, Gates is busy appearing on national media  discussing his solution to the pandemic.

For one of his most revealing conversations of late, Gates recently appeared The Ellen Degeneres Show. Ellen has also been in the news in recent weeks after being described as ‘one of the meanest people alive’ by actor Kevin T. Porter.

Right now we all need a little kindness. You know, like Ellen Degeneres always talks about! 😊❤️

She’s also notoriously one of the meanest people alive

TV script writer Benjamin Simeon also commented that Ellen ‘picks someone different’ in the office to hate every day, a sharp turn from her fun and quirky demeanor she presents on camera.

B) A new staff member was told “every day she picks someone different to really hate. It’s not your fault, just suck it up for the day and she’ll be mean to someone else the next day. They didn’t believe it but it ended up being entirely true.

Bill Gates sat down with Ellen DeGeneres over the internet last week to discuss the coronavirus pandemic and to tell the world that life will not get back to normal until ‘7 billion healthy people’ have taken his soon-to-be-invented vaccine.

Of course, their tacitly agreed upon position is that a vaccine is the solution and that there are no other alternatives worth discussing, even though many are reporting that the virus is already mutating and a vaccine may not ever be possible.

Bill: “…what policies do we have, because until we get almost everybody vaccinated, uh, globally, we still won’t be fully back to normal.”

Ellen: “…I mean, I can’t even imagine going out to a crowded restaurant or anything in June or July if we don’t have vaccines, how, how do you see us acclimating back into a normal life when we don’t have the cure for this?”

Bill: “…we need to start getting things back to normal. They won’t be back to normal until we either have that phenomenal vaccine or a therapeutic that’s over 95% effective and so we have to assume that’s going to be almost 18 months from now.” – Bill Gates

Eighteen months of lockdown would desolate our civil liberties and destroy the economy for years to come, all while substantial money is made from the eventual vaccine, whether or not it works as intended or causes harm to the patient.

“[The economy] won’t go back to normal in some very rapid fashion because not only do we have these factories shut down and all these activities have ceased, even as we start them back up people will still be a bit leery about going out and they will have seen their investments and their job security greatly reduced.” – Bill Gates

Bill Gates, Anthony Fauci and others have for weeks been alluding to a coronavirus vaccine and immunity certificate for everyone, which would ostensibly be required to engage in essential activities such as school, work, and worship.

The Bill and Melinda Gates Foundation has been funding the development of vaccines by supporting leading pharmaceutical companies, and also supporting the development of new technologies such as ‘microneedle technology,‘ which would implant a record of immunization under the skin that can be read by smartphone technology or via infrared light. Numerous multimillion-dollar grants have been awarded to these projects.

“We want to get into this semi-normal phase whenever we can and then the vaccine is the thing that will change things and that’s why [we need to] figure out how to make sure it’s safe because when you give it to 7 billion healthy people that’s super important.” – Bill Gates

In contrast to Gates’s foreboding message that lockdowns, required vaccines, and a global economic recession must happen, protests are occurring around the country calling for an opening of the American economy again and a return of our civil liberties which are being rapidly eroded.

As Ellen’s never-ending praise for Bill Gates and apparent refusal to ask any serious questions about our civil liberties or the implications of global vaccination illustrates, bleeding heart Hollywood stars and billionaire philanthropists are not always the characters they play on TV.

This article (WATCH: Bill Gates and Ellen Discuss Vaccinating ‘7 Billion Healthy People’ in Order to ‘Return to Normal’) as originally created and published by Waking Times and is published here under a Creative Commons license with attribution to Phillip Schneider and WakingTimes.com. It may be re-posted freely with proper attribution, author bio, and this copyright statement.