They Live Amongst Us: Anatomy of a Cult 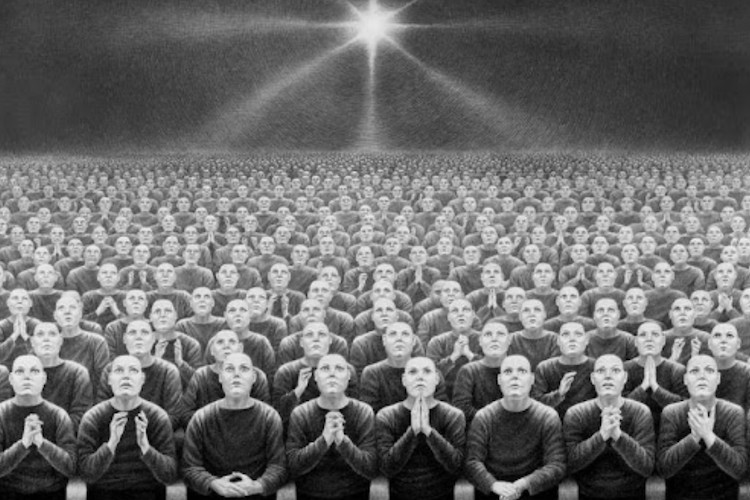 Despite a preponderance of the evidence proving COVID to be a non-event for most of us, over 1 million people have fallen foul to vaccine injury. This should be enough to stop most people in their tracks. It hasn’t. Many emerge from near death experience even more pontifical than before, denouncing the rest of us for not joining in this mortal game of Russian Roulette. Fuelling their self-righteous indignation of us, is other people’s self-righteous indignation of them. It is a perpetual loop of blame and shame.

There can be no avoiding these people. A sort of Provisional Mask Army. The ones acting in good conscience lost to the morally virtuous super spreaders of hyperbole.

They have been groomed by something far more powerful than the truth, called ‘the science,’ and they will follow ‘it’ right off the edge of a cliff.

But that’s only half the story. If you’re unfortunate enough to die within two weeks of taking the jab, despite your best effort, the CDC might record your death as ‘unvaccinated,’ the commentariat might report that you “died suddenly and following a short illness,” and family members might take comfort in the fact that “things could have been worse.”

This unholy mess works because a new ideology has swept across the moral fabric. Unless you’re taking an experimental medical intervention fraught with danger, you’re dancing on the graves of all those who have died. Ridding people with guilt takes away their power, and blind obedience to authority does the rest, as Milgram discovered in his landmark experiment.

But the fact that humanity is in an abusive relationship with its governments, is only one part of the problem. There’s a long history of cults infiltrating polite society. The cult of personality of Lenin and later Stalin once captured an entire nation. But never in history has the entire world fallen to a cult.

Where the New Normal departs from other cult archetypes is in the instruments of mass communication, in the hands of a few fanatics, that have infiltrated the commons, and created an apotheosis around COVID-19, glorifying it to the divine proportions of Christianity. It has long been understood that if you repeat a lie often enough it becomes consensus.

What is also of great importance to these high priests are the decades of behavioural studies by the most distinguished experts in the field of social psychology. Not everyone in The Asch Experiment conformed, but the reasons why many found solidarity with the group are well understood by the behavioural scientists, on the payroll of the worlds government, nudging the people towards existential ruin.

And much of what is happening today in the rank and file of the New Normal, has the lessons of the Third Reich written all over it. If you’re still oblivious to the fact that you’re being indoctrinated into a cult, it’s probably because you’ve already been indoctrinated.

The End is Nigh

Cults are established on the back of major events, typically apocalyptic in nature. These biblical, extra-terrestrial, or viral prophecies speak to an impending disaster and redemption. A tinderbox setting forces people together under the protection of communitarianism, and encourages the more zealous members to denounce, ridicule and intimidate anyone not acting in accordance with the group. Deindividuation, as it is known, turns these harmless groups into psychological crowds, and very often results in mob mentality.

Our need to take refuge in the herd is hardcoded into our DNA, just as fear of social exclusion and a desire to cooperate are inherited evolutionary traits. Explaining why COVID began with social isolation. And why, after capitulating to every conceivable demand, we continue to be held to ransom, with the threat of further social isolation. Despite the obvious abuse of power, people remain beholden to their captors, through some bizarre emotional bond, strengthened every time they are released, albeit temporarily, from their captivity.

You can identify cults by their organisational structure. People are assigned a role, as in Zimbardo’s Stanford Prison Experiment and many go beyond the call of duty. The problem isn’t so much that ‘we are all in this together’ It’s that we simply are not, it’s the cult nobility lording over the rest of us. In this heightened state of emergency, however, people will not only accept more authority from those who are beyond the rules, they will emulate the prevailing authoritarian order, rather than become a victim of it. As Hannah Arendt discovered in her landmark thesis, ordinary people in search of purpose and direction, who are dutifully just following orders, have the potential to commit the most atrocious acts of evil.

Throughout COVID, these unpaid, unsolicited officers in the rank and file have spread the communicable indoctrination far wider than any bureaucrat. We are full to the rafters of morally superior COVID-vigilantes, condemning anyone for the mere suggestion that the earth, might in fact, orbit the sun. The resulting groupthink – if you’re not with us you’re against us – not only isolates new initiatives from outside influence, it removes their right to think and act for themselves and admonishes anyone brave enough to question the All Powerful Redeemer. In the end, people’s desire to reach unanimous agreement with the group, overrides their motivation for rational, intuitive decision making.

Executioners of the New Normal

The habitual lies, backpedalling and science that buckles under the lightest of scrutiny, is no arbitrary event. People understand they’re being duped, but refuse to act on crucial information. Instead, they acclimate to the golden age of false narratives. Encouraging people to act counterintuitively will, eventually cause them to abandon personal agency altogether, because that violent buffer to critical thinking, called consensus, holds the opposite to be true, to that which is before our very eyes.

In one breath, Boris Johnson implores us to get vaccinated because of the risk versus the reward. In the next, he admits ‘the vaccine doesn’t protect against catching or passing on COVID.’ His co-conspirator, meanwhile, hold Christmas to ransom if people refuse a third shot, and proceeds to threaten those who had previously been the only at-risk group, which this entire debacle was supposed to be about protecting. When the lips move, brace for lies, any collision with real world events is entirely accidental.

Anatomy of a Cult

Cults are illusive by nature. An outlier sailing under the false colours of a normal state of affairs. This is achieved by compounding cult rituals into the everyday humdrum, and converting old cultural touchstones into new ideological frontiers, until one is no longer distinguishable from the other. The tell-tale signs you may have accidentally joined a cult are numerous, from elbow bumps to muzzles, hand sanitiser to the 2-meter rule.

There is, after all, a long history of people’s superstitions being manipulated into performing irrational acts, if they can first be demoralised to the point of despair. Under such circumstances people have been known to commit ritualistic mass suicide, disembowel themselves and even murder their own children.

Things are not so different today. People hold themselves prisoner inside their own homes. They risk the lives of their own children to protect those already on their deathbed. They do this for a disease which has had zero impact on overall mortality in 2021. Some have been infantilised by their government, others reassured by Big Bird and there are those who have sold their soul at the house of ill repute, To say that it’s mad, mad world, doesn’t do it justice.

Other Cults you may have Joined

Against this frenzy of health persecution complex, other bizarre ideologies chip away at the social fabric. Membership to society hinges on your range of pronouns. The new cultural etiquette is wokeism. Your affinity with those who have swapped their sexual identity determines your social cachet, while your desire to find for the nearest bucket, paints a target on your back.

Otherworldly social theories decouple mothers from giving birth, sexualise children, and encourage toddlers to trade their gender. At the root of all of this is a flagrant attack on humanity, on nature, on carbon-based lifeforms.

You only need to observe the Cult of Personality being visited upon future generations by the lionising of Greta, to catch of glimpse of how climate change will evolve into a religious order.

The end game to all of this is the spiritual requisition of the human soul and a day of reckoning for humanity mark 1.0.

But as the circus catches fire there are those watching from the side-lines who are simply not having it. The vestiges of rationality left behind, call them deniers or refuseniks, have formed a cult of their own. A cult of scepticism and non-compliance.

By some accounts they are at a greater risk of a long and healthy life, and woe betide, the mob is agitated. They are calls for immediate sanctions. Following twenty months of denouncements, public enmity is reaching fever pitch. If the barbaric treatment of another dehumanised social group, pre-Auschwitz, is anything to go by, it could be just a matter of time before the deniers are forced into internment camps, or worse, lined up against firing squads.

On the other hand, the cult has revealed its more sinister aspects, thousands of legitimate voices from science and medicine are pushing back in opposition, and even the double vaccinated are waking up to the fact that their freedoms are also in jeopardy. As a wise man once said, “first they ignore you, then they laugh at you, then they attack you, then you win.”

**This article was originally published at The Cogent.**