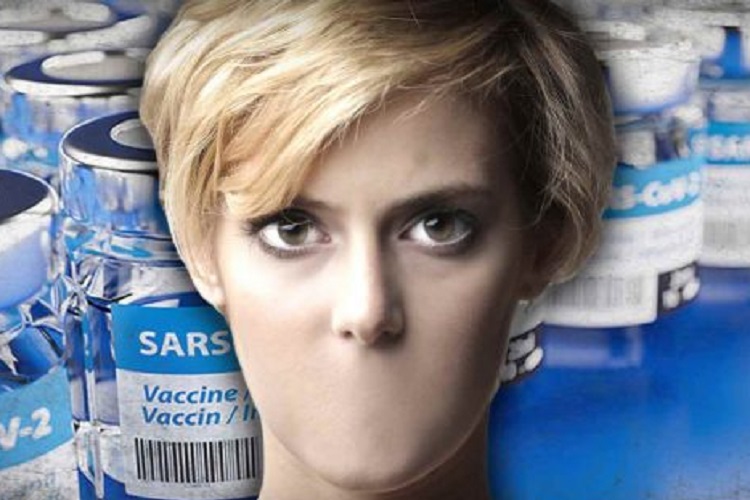 While there are certainly some outlandish claims based on complete nonsense made by those who oppose vaccinations as well as the rabid pro-vaxxers, there are very real reasons to advocate for informed consent and vaccine safety. No one here at TFTP is telling anyone what to do in regard to vaccinations. We are however, advocating for safety at all levels of this process. Nevertheless, those who promote vaccine safety are increasingly being treated as outcasts and lawmakers and media alike are calling for them to be silenced.

There are now renewed efforts by many in the government and medical institutions to quash the chatter when it comes to talking about the safety of the COVID-19 vaccine.

The most recent call for censorship comes from Francesco Rocca, president of the International Federation of Red Cross and Red Crescent Societies. In a virtual briefing to the U.N. Correspondents Association, Rocca called for a government and institution-sponsored push to combat “fake news” about COVID-19 vaccines, calling skepticism over the jab “a second pandemic.”

Rocca clearly stated that “to beat this pandemic, we also have to defeat the parallel pandemic of distrust.”

As the AP reported, he said there is “a growing hesitancy about vaccines in general, and about a COVID vaccine in particular” around the world, pointing to a recent Johns Hopkins University study in 67 countries that found vaccine acceptance declined significantly in most countries from July to October this year.

Rocca correctly stated that skeptics of the safety of the vaccine are not just in Western countries and, in fact, concerns come from all around the globe.

“We believe that the massive, coordinated efforts that will be needed to roll out the COVID vaccine in an equitable manner need to be paralleled by equally massive efforts to proactively build and maintain trust,” Rocca said.

“Massive efforts to proactively build and maintain trust” is double speak for ‘censor those who don’t unquestioningly line up to receive a vaccine that was developed with no long-term studies and in record time.’

While those who don’t blindly trust a fast-tracked vaccine are being labelled as kooks and anti-vaxxers, the reality is that these vaccine manufacturers and their government enablers have given us every reason in the world not to trust them.

“In several African countries, we have seen a common skepticism towards vaccines in general, with a common belief being that foreigners use Africa as a medical ‘testing ground,’” Rocca told the UN, dismissing Big Pharma’s history in Africa.

Skepticism from Africans is most assuredly warranted. Pfizer, one of the lead manufacturers of the COVID-19 vaccine, that the UK will start distributing this week, has a history in Africa of testing drugs on unsuspecting people.

In 2000 the Washington Post published a major exposé accusing Pfizer of testing a dangerous new antibiotic called Trovan on children in Nigeria without receiving proper consent from their parents. The experiment occurred during a 1996 meningitis epidemic in the country. In 2001 Pfizer was sued in U.S. federal court by thirty Nigerian families, who accused the company of using their children as human guinea pigs.

In 2006 a panel of Nigerian medical experts concluded that Pfizer had violated international law. In 2009 the company agreed to pay $75 million to settle some of the lawsuits that had been brought in Nigerian courts. The U.S. case was settled in 2011 for an undisclosed amount.

Classified U.S. State Department cables made public in 2010 by Wikileaks indicated that Pfizer had hired investigators to dig up dirt on Nigeria’s former attorney general as a way to get leverage in one of the remaining cases. Pfizer had to apologize over the revelation in the cables that it had falsely claimed that the group Doctors Without Borders was also dispensing Trovan during the Nigerian meningitis epidemic.

Are we supposed to forget the track record of this company who deliberately misled regulators about the hazards of their products, knowingly contributing to the deaths of more than 125 people? Or who experimented on children? Or who has paid out hundreds of millions in settlements for the deaths of scores of patients?

The fact is that Pfizer is one of many companies developing or who has developed a COVID-19 vaccine with track records that include bribing government officials to illegally testing products on children to making false claims about drugs and illegally marketing them. These companies include Johnson & Johnson, whose penalty total on Violation Tracker is $4.2 billion, AstraZeneca ($1.1 billion), GlaxoSmithKline ($4.4 billion) and Sanofi ($641 million).

The track record of these companies, coupled with the incredibly fast development even has staunchly pro-vaccine health care workers worried. As TFTP reported last week, because they work on the front lines, healthcare workers are eligible to skip to the front of the line to receive the jab. However, despite assurances from vaccine makers and their revolving door friends in the Food and Drug Administration, many of these front line workers are leery of this rushed product.

Should they all be silenced too?

While attempting to fact check completely false information about vaccines is one thing, the idea that government, media, and institutions should launch a coordinated effort to censor those who simply advocate for safety, is chilling. Questioning potential solutions and vigorously testing them is the very foundation of sound science. When one side gets to silence the other, however, this process can no longer be referred to as science but rather a scientific dictatorship.

**This article (Red Cross President Demands Gov’t, Media Silence Those Who Question Safety Of COVID Vaccine) was originally published at The Free Thought Project and is re-posted here with permission.**