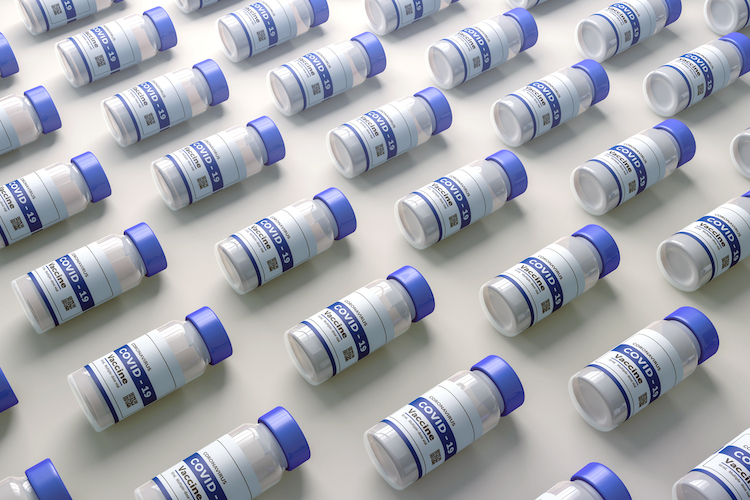 This week’s number of total adverse events for all age groups following COVID vaccines surpassed 400,000, according to data released today by the Centers for Disease Control and Prevention (CDC). The data comes directly from reports submitted to the Vaccine Adverse Event Reporting System (VAERS).

Every Friday, VAERS makes public all vaccine injury reports received as of a specified date, usually about a week prior to the release date. 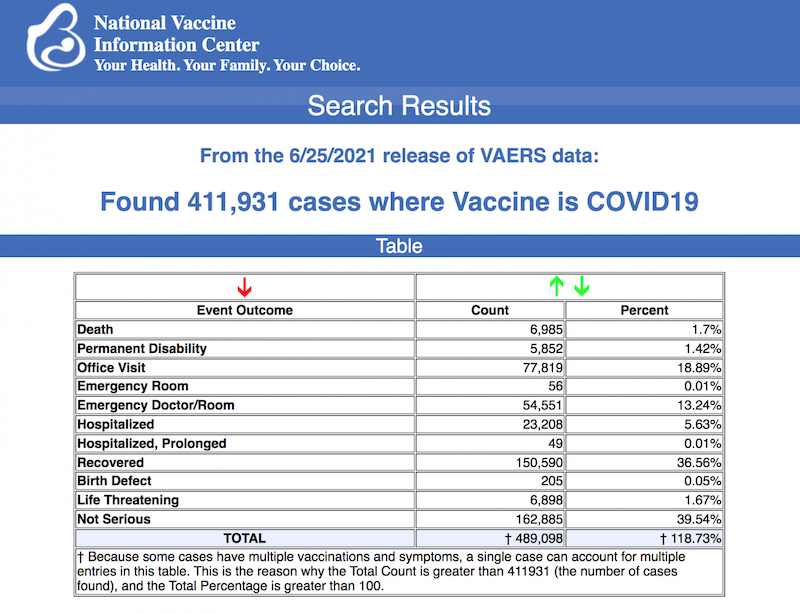 Fox News reported July 1, younger children could become eligible for a COVID vaccine this fall, according to a top executive at Pfizer who said the company has plans to request emergency approval of its vaccine in kids aged 5 to 11 by September or October. Pfizer’s vaccine is currently authorized for use in individuals aged 12 and older.

Dr. Alejandra Gurtman, vice president of vaccine clinical research and development at Pfizer, appeared along with representatives from other major drugmakers to discuss data and timelines behind pediatric clinical trials during a Johns Hopkins University and University of Washington virtual symposium.

Despite growing reports of heart inflammation in teens linked to the vaccine, Gurtman said Pfizer “felt very comfortable to move down in age,” speaking to the trials involving participants aged 6 months to 11 years.

As The Defender reported June 29, doctors in Pennsylvania reported a case of a U.S. patient who developed blood clots after receiving the Moderna COVID vaccine. In a case report, published in the Annals of Internal Medicine, healthcare professionals said a 65-year-old man arrived at the hospital with a serious form of blood clotting known as thrombosis with thrombocytopenia (TTS) just 10 days after receiving his second dose of the Moderna vaccine.

Two days later, the unnamed patient died, with doctors concluding his symptoms were consistent with vaccine-induced clotting, also known as VITT. The man’s treatment providers did not recognize VITT earlier, so he did not receive the specialized treatment given to people who suffer from that condition, but instead was treated with heparin.

Doctors at Allegheny Health said their research “complicates” theories that prior clotting cases were solely caused by adenovirus-based vaccines, as some experts have previously speculated. Doctors also stated they believed this to be the first reported case of blood clots following an mRNA vaccine, despite thousands of reported cases to VAERS.

As The Defender reported June 29, Sen. Ron Johnson (R-WI) held a news conference Monday to discuss adverse reactions related to the COVID vaccines — giving individuals who have been “repeatedly ignored” by the medical community a platform to share their stories.

The group that spoke was put together by Ken Ruettgers, a former Green Bay Packers offensive lineman, whose wife suffered an adverse reaction after receiving a COVID vaccine. Ruettgers, who now lives in Oregon, started a website to bring awareness of COVID vaccine reactions to the medical community.

“We are all pro-vaccine,” Johnson said at the onset of the news conference. In fact, Johnson has had every flu shot since the Swine flu, is current on all of his vaccines and was a huge supporter of Operation Warp Speed, though he has not had a COVID vaccine because he already had COVID.

Five people from across the U.S., including a 12-year-old girl who was part of the Pfizer clinical trial, joined the conference at the federal courthouse in Milwaukee. They described their reactions to the COVID vaccines, including neurological, cardiac and gastrointestinal issues, debilitating health problems and hospitalizations.

Johnson said his goal was to provide a platform for these individuals who were injured by COVID vaccines so the health community and mainstream media would acknowledge them and get to the root cause.

Johnson argued that while most people don’t suffer significant side effects following vaccination, he is concerned about “that small minority that are suffering severe symptoms.”

The Defender reported June 28, the U.S. Food and Drug Administration (FDA) on June 25 added a warning to patient and provider fact sheets for Pfizer and Moderna COVID vaccines indicating an increased risk of myocarditis and pericarditis, particularly following the second dose and with onset of symptoms within a few days after vaccination.

The FDA’s update followed a review of information and discussion by the CDC’s Advisory Committee on Immunization Practices meeting on June 23 where the committee acknowledged 1,200 cases of heart inflammation in 16- to 24-year-olds.

Health officials said the benefits of receiving a COVID vaccine still outweigh any risks. Physicians and other public commenters accused the CDC during the meeting of exaggerating the risk to young people of COVID, and minimizing the risk of the vaccines.

As The Defender reported June 30, in a study published June 29 in JAMA Cardiology, 23 male military patients with a median age range of 25 years were evaluated between January and April 2021 for acute-onset chest pain following vaccination with an mRNA COVID vaccine.

All military members were previously healthy with a high level of fitness. They were physically fit by military standards and lacked any known history of cardiac disease, significant cardiac risk factors or exposure to cardiotoxic agents. Seven military members received Pfizer’s COVID vaccine and 16 received the Moderna vaccine.

Researchers stated that while the true incidence of myocarditis is unknown at this time, the presentation pattern and clinical course suggest an association with an inflammatory response to vaccination.

A separate study published in JAMA Cardiology on June 29 investigated seven cases of acute myocarditis between Feb. 1 and April 30. Four cases occurred within five days of receiving a second dose of an mRNA COVID vaccine.”

As The Defender reported June 29, more than 4,100 people have been hospitalized or died with COVID in the U.S. despite having been fully vaccinated, according to new data from the CDC.

As of June 21, nearly half (49%) of cases occurred in females and 76% were aged 65 years and older. There were a total of 3,907 hospitalizations and 750 deaths among those who had breakthrough infections, although not all of the hospitalizations may have been due primarily to COVID.

According to the CDC’s website, the number of COVID vaccine breakthrough infections are likely an undercount of all SARS-CoV-2 infections among fully vaccinated persons due to passive and voluntary reporting.

On May 1, the CDC transitioned from monitoring all reported vaccine breakthrough cases to only reporting cases resulting in hospitalization or death, a move the agency was criticized for by health experts.

On July 1, Fox6 Milwaukee reported that 21 people in Wisconsin have died of COVID since March 1 despite being fully vaccinated. The median age was 82 and all 21 people had underlying health conditions. The Wisconsin Department of Health Services said no gene sequencing was conducted so it is not clear whether anyone was infected with the Delta variant.

As Tulsa World reported July 1, data released for the first time Wednesday by the Oklahoma State Department of Health showed 737 infections in people who were fully vaccinated or had previously recovered from a COVID infection. Of 737 infections, 69 resulted in hospitalization and 11 people died, according to a state epidemiology report.

People injured by COVID vaccines turn to GoFundMe for help

According to research compiled by a group in Mesa County, Colorado, as of June 25 there were 180 GoFundMe accounts seeking help for people who had suffered injuries after receiving a COVID vaccine and were left with large medical bills and other expenses.

On May 19, a CDC employee said our questions had been reviewed and our inquiry was pending in their system, but would not provide us with a copy of the response. We were told we would be contacted by phone or email with the response.

On June 24, we contacted the CDC and were told nobody knew the specialist from the agency’s Vaccine Task Force who contacted us in March, and that our request was still pending in the system. It has been 116 days since we sent our first email inquiring into VAERS data and reports and we have yet to receive a response.