The Descent Into (Utter) Madness Little wonder that here and there sanity nostalgia is gripping the Western world, at least those isolated portions of it that are not internalising the sinister “new normal.” But it is seemingly to no avail. All commanding positions are firmly in the hands of lunatics, who are determined to turn a once great and exemplary civilisation into an asylum.

As George Orwell has taught us, language manipulation is at the frontline (yes, I have just broken one of the cardinal rules of his “Politics and the English Language,” but not his final injunction to “break any of these rules sooner than say anything outright barbarous”) of politicised mind-bending. The sort of language we are permitted to use circumscribes the thinking that we shall be allowed to engage in. The assault on language is, therefore, an integral component of the unrelenting warfare being waged for the conquest and control of the mind. Word elimination and reassignment of meaning, as Orwell also presciently noted, are essential elements of the campaign to reformat the mind and eventually to subjugate it.

A breath-taking example of how this process works was recently unveiled by the thoroughly brain-washed students of the once prestigious Brandeis University who, this time without prompting from their faculty elders and betters, voted to ban from their campus such odious words and phrases as “picnic” and “you guys,” for being “oppressive”. “Picnic” is prohibited because it allegedly evokes the lynching of Blacks.

The precocious young intellectuals took pains to produce an entire list of objectionable words and phrases, shocking award-winning novelist Joyce Carol Oates who tweeted in bewilderment: “What sort of punishment is doled out for a faculty member who utters the word ‘picnic’ at Brandeis? Or the phrase [also proscribed – S.K.] ‘trigger warning’? Loss of tenure, public flogging, self-flagellation?” 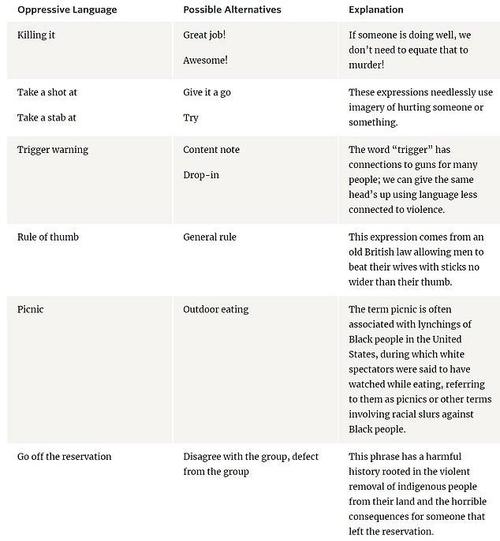 All three punishments will probably be applied to reactionary professors who go afoul of the list’s rigorous linguistic requirements.

Not to be outdone by the progressive kids on the East Coast, avant-garde California legislators have passed a law to remove the pronoun “he” from state legal texts. The momentous reform was initiated by California’s new attorney general, Rebecca Bauer-Kahan, who after looking up the job requirements made the shocking discovery that the law assumed that the attorney general would be a man.

Upon review, it turned out that the state code and other legal documents were enabling unacceptable concepts by using pronouns “he,” “him” and “his” when referring to the attorney general and other state-wide elected officials. Appalled, Ms. Bauer-Kahan denounced these linguistic lapses for not representing “where California is and where California is going.” She inarguably was right on that score at least, which has perhaps also something to do with the massive exodus of California residents to less complicated parts of the country.

When lawmakers of a state which is rapidly turning into a North American Calcutta have no concerns more pressing than to revise the use of pronouns in official documents, that sends a clear message where that state is going, exactly as the smart and thoroughly up-to-date woman said.

But as a Pakistani immigrant father in Seattle, state of Washington, discovered to his chagrin, the linguistic clowning can have very serious personal and political consequences. After checking in his 16-year-old autistic son for treatment in what he thought was a medical facility, Ahmed was shocked to receive a telephone call where a social worker explained to him that the child he had originally entrusted to the medical authorities as a son was actually transgender and must henceforth, under legal penalty of removal, be referred to and treated as a “daughter.”

Coming from a traditional society still governed by tyrannical precepts of common sense and not accustomed to the ways of the asylum where in search of a better life he and his family inadvertently ended up, the father (a title that like mother, now officially “number one parent,” is also on the way out) was able to conceive his tragic predicament only by weaving a complex conspiracy theory:

“They were trying to create a customer for their gender clinic . . . and they seemed to absolutely want to push us in that direction. We had calls with counsellors and therapists in the establishment, telling us how important it is for him to change his gender, because that’s the only way he’s going to be better out of this suicidal depressive state.”

Since in the equally looney state of Washington the age when minors can request a gender-change surgery without parental consent is 13, the Pakistani parents saw clearly the writing on the wall and, bless them, they came up with a clever stratagem to outwit their callous ideological tormentors. Ahmed “assured Seattle Children’s Hospital that he would take his son to a gender clinic and commence his son’s transition. Instead, he collected his son, quit his job, and moved his family of four out of Washington.”

Perhaps feeling the heat from the linguistic Gestapo even in his celebrity kitchen, iconic chef Jamie Oliver has come on board. Absurdly, Jamie vowed fealty to the ascendant normal by dropping the term “Kaffir lime leaves” from his recipes, in fear that the alleged “historically racist slur” would offend South Africans. No evidence at all has been furnished or demanded of complaints from South Africa in that regard. But it speaks volumes that someone of Jamie’s influence and visibility should nevertheless deem it prudent to anticipate such criticism even though, should it have materialised, it of course would not originate from South Africa but from white Western political correctness commissars.

Jamie is now busy, but not just cooking. He is going over his previously published recipes in order to expunge all offensive references to kefir leaves. Orwell aficionados will recall this precious passage from 1984: “Every record has been destroyed or falsified, every book rewritten, every picture has been repainted, every statue and street building has been renamed, every date has been altered.” And now every recipe as well. The dystopia fits, does it not, to a tee even something as seemingly trivial as a cooking show?

But it is not just recipes. Children’s fairy tales are also fair game for 1984 revision. Hollywood actress Natalie Portman (Star Wars, The Professional, Thor), inspired apparently by the new cultural normal, has taken it upon herself not to write, but to re-write, several classic fairy tales to make them “gender-neutral,” so “children can defy gender stereotypes.” Predictably, pronouns were again a major target:

“I found myself changing the pronouns in many of their books because so many of them had overwhelmingly male characters, disproportionate to reality,” quoth Natalie as she put her linguistic scalpel to such old favourites as The Tortoise and the Hare, Country Mouse and City Mouse and The Three Little Pigs.

Need we go on, or does the sharp reader already get the general drift? How about State University of New York student Owen Stevens, who was suspended and censured for pointing out on his Instagram the ascertainable biological fact that “A man is a man, a woman is a woman. A man is not a woman and a woman is not a man.” (Owen was snitched on by fellow students, readers from the former Eastern bloc will be amused to learn.) Or the Nebraska university basketball coach who was suspended for using in a motivational speech the mysteriously offensive word “plantation”? Or the hip $57,000-a-year NYC school that banned students from saying “mom” and “dad”, from asking where classmates went on vacation or wishing anyone “Merry Christmas” or even “Happy Holidays”? Or female university student Lisa Keogh in Scotland who said in class “women have vaginas” (who would be better informed than she on that subject?) and are “not as strong as men”, who is facing disciplinary action by the university after fellow classmates complained about her “offensive and discriminatory” comments? Or Spanish politician Francisco José Contreras whose Twitter account was blocked as a warning for 12 hours after he tweeted what some would regard as the self-evident truth that “men cannot get pregnant” because they have “no uterus or eggs”?

As Peter Hitchens noted recently “the most bitterly funny story of the week is that a defector from North Korea thinks that even her homeland is ‘not as nuts’ as the indoctrination now forced on Western students.”

One of Yeonmi Park’s initial shocks upon starting classes at Colombia University was to be met with a frown after revealing to a staff member that she enjoyed reading Jane Austen. “Did you know,” Ms. Park was sternly admonished, “that those writers had a colonial mind-set? They were racists and bigots and are subconsciously brainwashing you.”

But after encountering the new requirement for the use of gender-neutral pronouns, Yeonmi concluded: “Even North Korea is not this nuts… North Korea was pretty crazy, but not this crazy.” Devastatingly honest, but not exactly a compliment to what once might have been the land of her dreams.

Sadly, Hitchens reports that her previous experience served Yeonmi well to adapt to her new situation: “She came to fear that making a fuss would affect her grades and her degree. Eventually, she learned to keep quiet, as people do when they try to live under intolerant regimes, and let the drivel wash over her.”

Eastern European readers will unfailingly understand what it is that Hitchens meant to say.