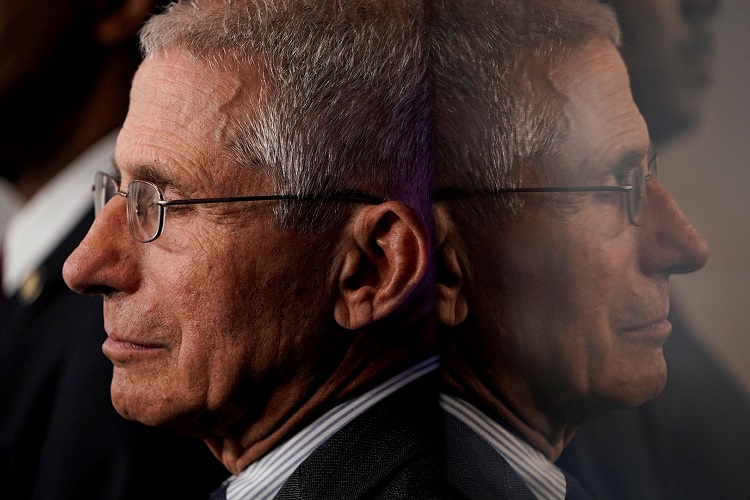 Update (1050ET): Someone must have picked up the red phone and made a call, as Dr. Anthony Fauci said during a Friday White House press briefing that ‘most scientists believe COVID-19 didn’t come from a lab,’ contradicting viral comments to CNN by former CDC Director Robert Redfield.

Former CDC Director Robert Redfield says that SARS-CoV-2, the virus which causes COVID-19, did not originate from a wet market in Wuhan, China, and instead escaped from a nearby lab which was performing gain-of-function research on bat coronaviruses to make them more easily infect humans.

“I do not believe this somehow came from a bat to a human,” Redfield told CNN‘s Sanjay Gupta in an interview set to air Sunday night at 9 p.m. ET. “Normally, when a pathogen goes from a zoonot to human, it takes a while for it to figure out how to become more & more efficient in human to human transmission.”

“It’s only an opinion; I’m allowed to have opinions now,” he added.

“I do not believe this somehow came from a bat to a human,” former CDC Director Dr. Redfield tells @drsanjaygupta. “Normally, when a pathogen goes from a zoonot to human, it takes a while for it to figure out how to become more & more efficient in human to human transmission.”

When asked how he believes the lab was working to make the virus infect humans more efficiently, he said “Let’s just say, I have a coronavirus, and I’m working on it — most of us in the lab are trying to grow virus. We try to make it grow better and better and better and better, so we can do experiments and figure out about it. That’s the way I put it together.”

Redfield, a virologist picked by former President Trump to lead the Centers for Disease Control, said he believes that the pandemic began as a localized outbreak in Wuhan in September or October of 2019, earlier than the official timeline, and that it spread to every province in China over the ensuing months.

And while the rest of the world was told the only initial Covid-19 cases in China had originated from a wet market in Wuhan, Redfield is confident the evidence suggests that was simply not the case. According to Redfield, even his counterpart at the China CDC, Dr. George Gao, was initially left in the dark about the magnitude of the problem until early January. He described a private phone call he had with Gao in early January 2020, when Gao became distraught and started crying after finding “a lot of cases” among individuals who had not been to the wet market. Gao, Redfield says, “came to the conclusion that the cat was out of the bag.”
The initial mortality rates in China were somewhere between “5-10%,” Redfield told me. “I’d probably be cryin’ too,” he added.
…
The United States wasn’t formally notified of the “mysterious cluster of pneumonia patients” until December 31, 2019. Those were critical weeks and months that countries around the world could’ve been preparing. –Dr. Sanjay Gupta via CNN

Redfield says that the notion COVID-19 jumped from a bat to a human doesn’t make “biological sense,” noting to Gupta that he spent his career as a virologist. His opinion differs from that of the World Health Organization, which has called the lab escape theory “extremely unlikely” with no clear evidence.

And of course, CCP-friendly pundits are towing Beijing’s official line by attacking Redfield:

We are all allowed to have “opinions.” Among Redfield’s previous opinions were that a useless vaccine for AIDS was actually a cure, and that he could just make up data about the disease and publish it.

My “opinion”: Robert Redfield is a quack. @cnn should not give him a platform https://t.co/IufSP8hcXi

Which, in itself should be enough evidence to question the mainstream narrative.