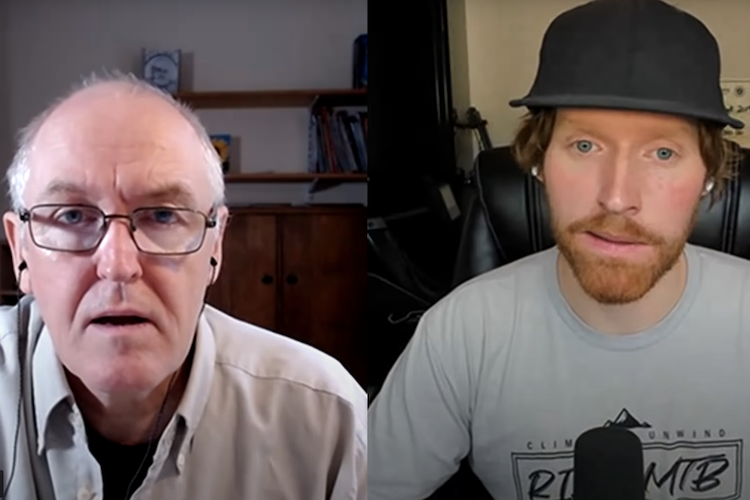 Kyle Warner is 29 years old and was at the peak of his career as a professional mountain bike racer when, in June 2021, he got his second dose of Pfizer’s COVID-19 shot. He suffered a reaction so severe that, as of October, he was still spending days in bed, easily overwhelmed by too much mental or physical exertion.

Warner shared his detailed experience with John Campbell, a retired nurse and teacher based in England, and headed to Washington, D.C., in early November 2021 to get the word out that COVID-19 shots aren’t always as safe as you have been led to believe. Even someone in their 20s, in peak physical form, can be severely harmed, which is why Warner is also speaking out against vaccine mandates.

Warner wanted to be able to travel internationally, so he decided to get a COVID-19 shot. He received his first dose of the Pfizer jab in mid-May 2021, suffering only a sore arm afterward. After his second dose on June 10, his arm wasn’t even sore, so he thought he got off easy.

But there was a strange symptom that occurred within seconds that may have been the clue that something was very wrong. “As soon as they injected it, I had a weird metallic saline taste in my mouth. I asked the guy, ‘Is that normal?’ and he said no, they don’t hear of that much.”3 According to Campbell:4

“The fact that the clinician doesn’t recognize that a metallic taste in the mouth could be a sign of an inadvertent intravascular administration concerns me because what happens is if the vaccine goes into your muscle, then it stays in your muscle, and it’s going to take half an hour to be systemically absorbed at all, or much longer than that. But if it goes into a vessel, you get a metallic taste straight away …

The fact that you could taste that straight away is, to me, very suspicious of them inadvertently giving that into a blood vessel … Basically you’re having the inflammatory reaction in your heart and in your joints instead of in your arm.”

A day or two later, with no sore arm, he thought it was going to be easier than the first dose, but about two weeks later he started having strange reactions in his heart. Throughout the day, he started experiencing periods of accelerated heart rate. As a professional athlete, Warner is very in-tune with his body.

He regularly wears a smart watch that tracks his heart rate and knows what’s normal for him — and this was not. While sitting at rest, his heart rate would spike to the 90s and over 100. He decided to cut out all stimulants like caffeine, just in case, and took two weeks off from riding because he didn’t feel good.

After the break, he attempted to go for a ride and his heart rate spiked to 160 and remained elevated. Feeling weak and nauseous, he had his friend take him to the emergency room. He told the ER doctor that he’d heard about myocarditis as a side effect with the mRNA injections and he thought he was having this reaction. They completely brushed him off, telling him that he was not having that reaction but, instead, was having an anxiety attack.

After being told that his problem didn’t make him a priority to be seen, he sat in the waiting room for 3.5 hours and was ultimately given a shot of the nonsteroidal anti-inflammatory drug Toradol to treat reactive arthritis. His heart rate dropped down to 110, leading the doctor to tell him he was doing better, but he was still at nearly double his average heart rate.

The doctor’s solution was to refer him to a psychiatrist for what he described as a “psychotic episode.” According to Warner, since he suggested that his reaction was from the shot, the health care practitioners thought he was imagining things or “trying to be anti-vaxx or a conspiracy theorist.” Four days later, he ended up in the hospital again.

Days after being sent home from the ER, Warner again had problems with his heart — this time, a strong squeezing sensation along with cramping and burning. He went to a different hospital where they took his concern seriously, said it could be myocarditis — an inflammation of the heart muscle — and referred him to a cardiologist.

It’s since been recognized that myocarditis and pericarditis, inflammation of the outer lining of the heart, are occurring after COVID-19 shots, most often after the second dose in male adolescents and young adults.5,6 The cardiologist diagnosed Warner with pericarditis along with postural orthostatic tachycardia syndrome (POTS) and reactive arthritis.

POTS is a blood circulation disorder that affects the autonomic nervous system and can be triggered by injections, including mRNA COVID-19 shots.7 One of the key symptoms of POTS is a significant increase in heart rate when a person stands up, and the elevated heart rate remains elevated for a longer than normal period. Fatigue, nausea, dizziness, heart palpitations and exercise intolerance can also occur.

As a professional biker, Warner has had his share of injuries, although prior to the shot he wasn’t in any pain and all of his injuries had healed. After the second dose of the jab, however, he felt like all of his old injuries were reactivated and became painful again. His wrists, for instance, became so painful that he couldn’t put his seatbelt on.

For four months now, Warner has been so ill that he hasn’t been able to work. Even mental exertion can cause him to relapse physically. When he has a “good” day and overdoes it, he ends up in pain again for the next few days. Even reading too much makes him feel drained.

While his symptoms of pericarditis have cleared, he’s still struggling with the symptoms of reactive arthritis and POTS, which can last for 12 to 18 months or more. And Warner, being very fit and accustomed to listening to his body, caught the problem early — many others may not.

Where’s the Support for Vaccine-Injured People?

Upward of 60 people have reached out to Warner to share their own experiences getting injured by COVID-19 shots. Many of them have been afraid to tell others out of fear that they’ll be mocked, ridiculed or labeled an “antivaxxer” for speaking out. However, they are not alone.

As of October 15, 2021, 818,044 adverse events have been reported to the Vaccine Adverse Event Reporting System following COVID-19 shots, including 17,128 deaths.8 Past investigations have shown only between 1%9 and 10%10 of adverse reactions are ever reported to VAERS, which is a passive, voluntary reporting system, so the actual number could be much higher and Steve Kirsch estimates there could be over 5 million unreported adverse effects.

Warner had to fill out his own report to VAERS because no doctor would do it for him. It took him 45 minutes to complete — a length of time that many doctors can’t or won’t devote when it comes to reporting adverse vaccine reactions seen among their patients.

At the Real, Not Rare rally held in Washington, D.C., Warner spoke before politicians to make a difference in the support level for vaccine-injured people — which is nonexistent in the U.S. — and voice opposition to vaccine mandates.

Their mission is to gain acknowledgement from elected officials and federal health agencies of vaccine adverse reactions and raise awareness within the medical community about these reactions. They also want to stop the denial of certain vaccine exemptions and stop vaccine mandates:11

Warner has also spoken with React 19, a grassroots organization also raising awareness about adverse events from COVID-19 shots. The woman who started the group, Warner said, is one of the first COVID-19 shot clinical trial patients and one of the first COVID-19 vaccine-injured people in the U.S. The group is tracking the vaccine injuries of 5,000 people and is calling on others to share their reactions as well, as part of their patient-led research program.12

Sadly, Warner said six of the people suffering from adverse events committed suicide in the past month; with the current government narrative silencing and censoring those who speak out about COVID-19 shot risks, those injured have no opportunity to speak out about their experiences. Even now, Warner said, being unable to work and carry on with his daily life the way he did pre-shot, “I just feel so worthless.”13

Warner has experimented with a number of therapies that he believes have helped, including ivermectin, pine needle tea and star anise. His doctor has recommended staying hydrated, wearing compression leggings and exercising gently in a supine position to regain his strength, but he still can’t ride a bike.

Vaccine-Injured Unlikely to Get Help

While health officials have begun to acknowledge myocarditis following COVID-19 shots, there are many other adverse events that are still being ignored. Neuroinflammation, severe headaches, epilepsy and even blindness have been reported, Warner said. While an increasing number of people are calling for support for those who have been injured, U.S. law is set up to protect drug companies with a complete liability shield.

In the U.S., vaccine makers already have something of a “free pass” when it comes to vaccine injury liability and lawsuits through the National Childhood Vaccine Injury Act of 198614 and the Public Readiness and Emergency Preparedness (PREP) Act, passed in 2005.15 The 1986 Act established a federal no-fault vaccine injury compensation program (VICP) as an administrative alternative to a lawsuit for injuries caused by vaccines recommended by the CDC for children.

Contested vaccine injury claims are adjudicated by the U.S. Court of Federal Claims in Washington, D.C., and there is a trust fund out of which claims are paid, sparing insurance companies representing vaccine makers and vaccine providers from costly payouts for vaccine injuries and deaths.16

Only reactions to routinely recommended vaccines may be heard in this “vaccine court,” however, which doesn’t apply to COVID-19 shots, which are being routed through the obscure Countermeasures Injury Compensation Program.17 The bottom line, sadly, is this, as noted by NVIC’s Barbara Loe Fisher:

“If you or a loved one dies or is permanently injured by an experimental or … [recently] licensed COVID vaccine, you cannot sue the drug company who made it, even if there is evidence the company could have made it less reactive or more effective.”