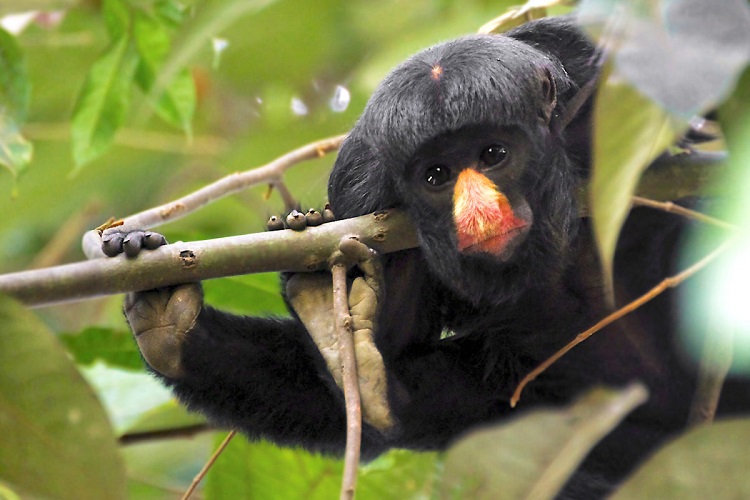 In a remote slice of Triunfo do Xingu, deep in Brazil’s northern Pará state, swaths of lush forest have been engulfed by flames in recent days. In another stretch to the north, a patch of untouched jungle has been almost entirely cleared this year. In countless other parts of this vast protected region, the Amazon is being cut down and burned at a dizzying speed.

The Área de Proteção Ambiental (APA) Triunfo do Xingu spans some ​​1.7 million hectares (4.2 million acres) across the municipalities of São Félix do Xingu and Altamira, long strongholds of Brazilian cattle ranching. It encompasses thousands of hectares of dense jungle and boasts a rich diversity of plant and animal species. It is also home to Indigenous groups and traditional peoples, who rely on the forest to survive.

Under federal protection since 2006, the territory is supposed to be used only for sustainable development, with landowners required to keep some 80% of the forest intact. When it was created more than a decade ago, Triunfo do Xingu was intended as a buffer that would protect vulnerable areas beyond its boundaries, like the Apyterewa Indigenous Territory and the Terra do Meio Ecological Station. The ecologically-rich Xingu Basin – within which it is nestled – is made up of some 28 conservation areas and 18 Indigenous territories.

But the area has come under pressure, becoming one of the most deforested regions in the Amazon in recent years. It lost some 436,000 hectares of forest between 2006 and 2019, with some 5% cleared last year alone, according to satellite data from the University of Maryland (UMD). Overall, the territory has lost nearly 30% of its forest cover, according to Francisco Fonseca, who works for The Nature Conservancy (TNC), a nonprofit focused on environmental conservation.

“The problem is that a lack of land oversight led to this area being more and more occupied, more and more threatened,” Fonseca said in an interview in late July. “And this will now only worsen going forward.” 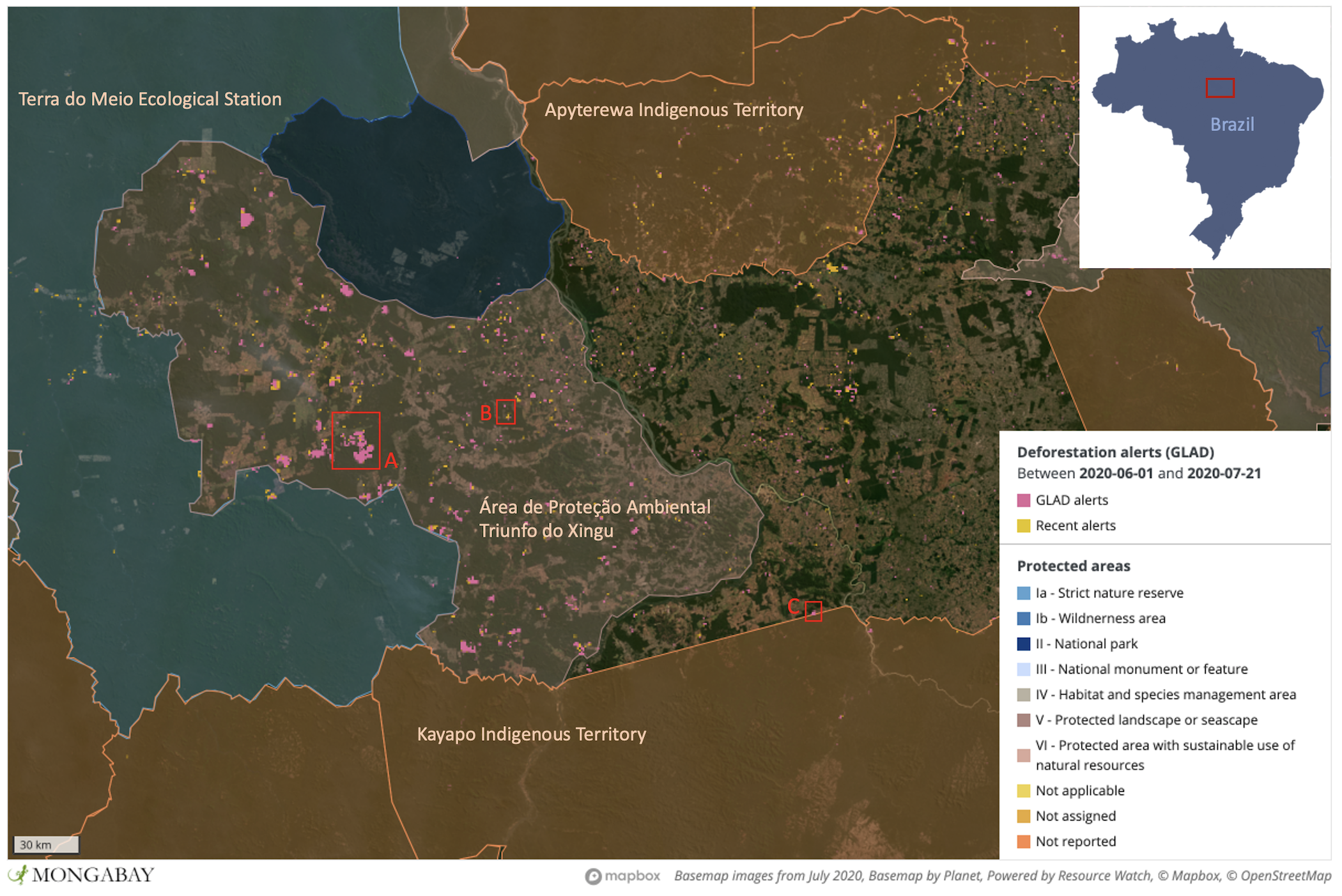 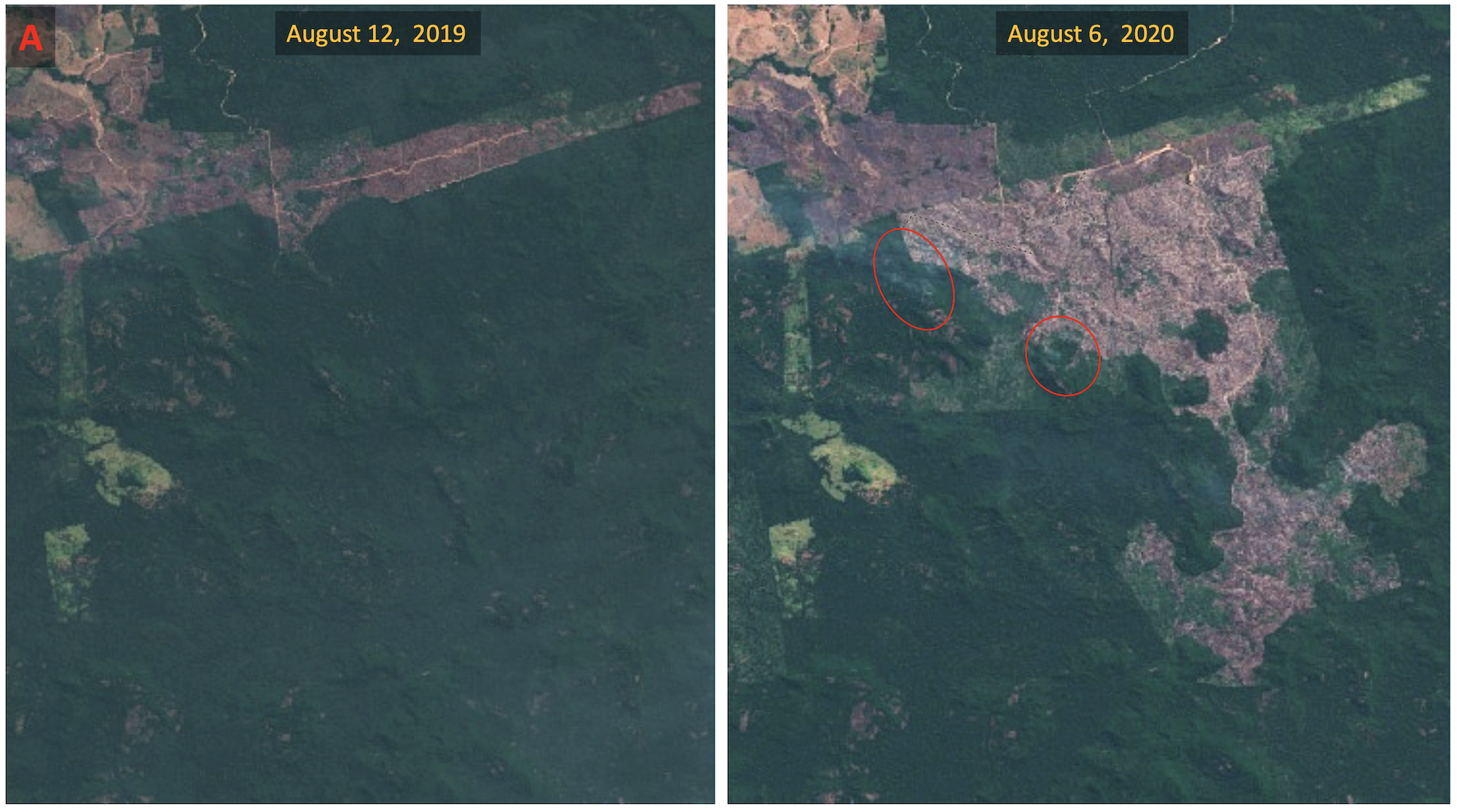 Satellite imagery of one area of tree cover loss in APA Triunfo do Xingu shows a large burn scar with active fires as of August 6 (circled in red). This area was covered with primary forest a year prior. Source: Sentinel 2. 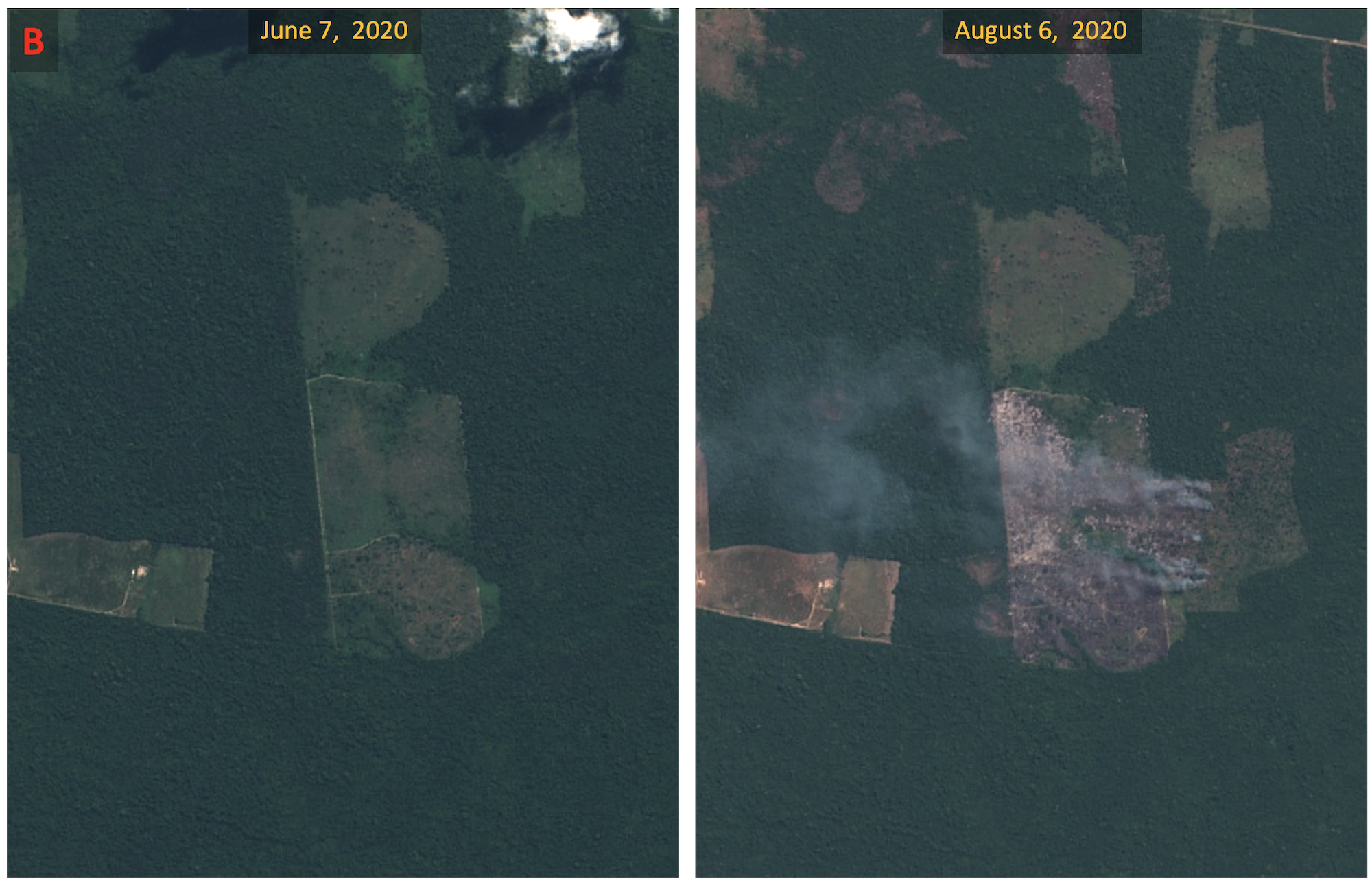 Another active burn site in Triunfo Do Xingu that is illegally expanding a previously cleared area and displacing rainforest. Source: Sentinel 2. 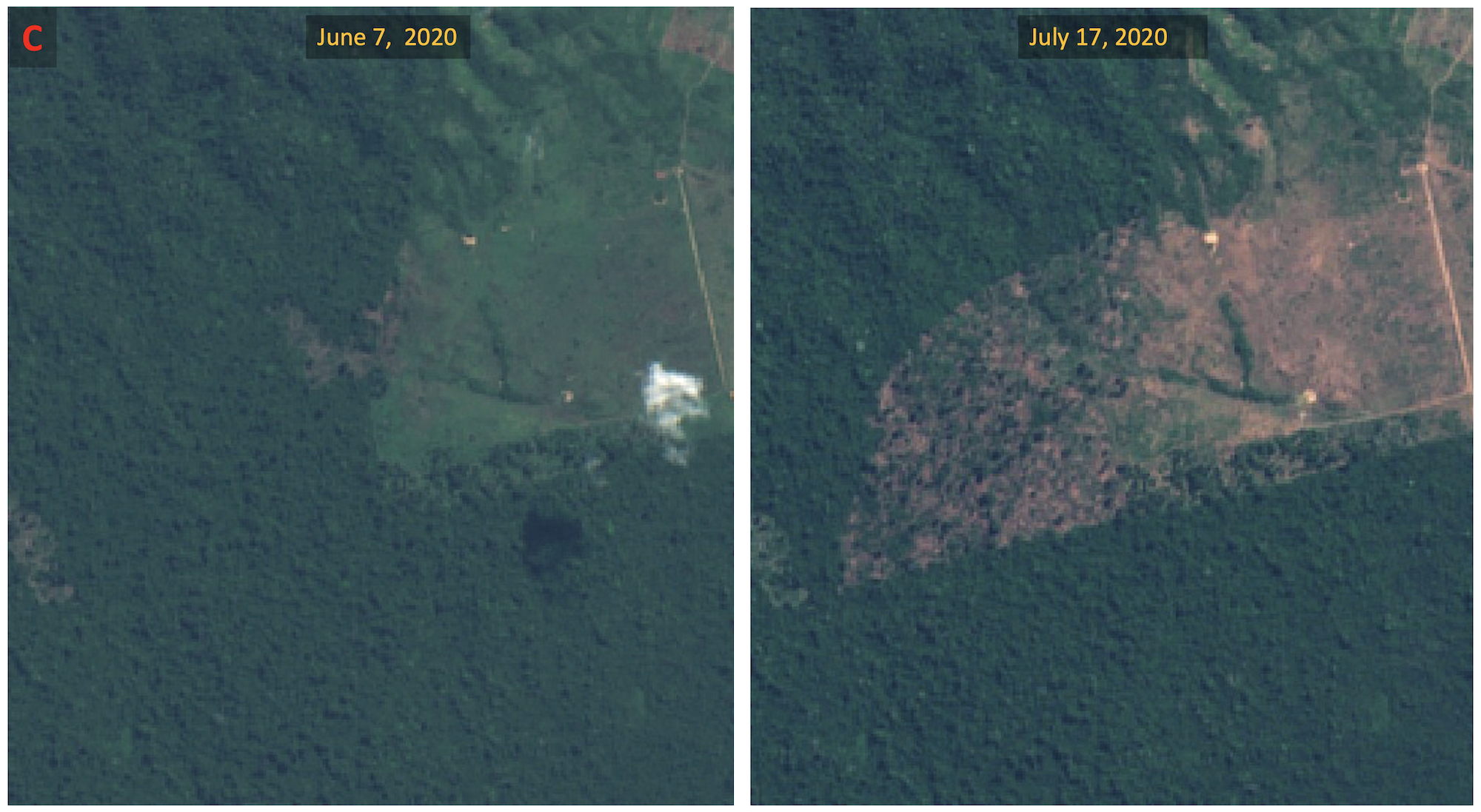 The incursion into Triunfo do Xingu has only intensified this year, amid a wider surge in deforestation and burning across the Brazilian Amazon. In May and June, some 6,973 hectares of forest were cleared in APA – accounting for two-thirds of deforestation in protected areas within the Xingu Basin, according to data from Rede Xingu+, a network of environmental and Indigenous groups working in the region.

“These are areas where there definitely should not be any burning,” said one advocacy source who asked to remain anonymous due to security concerns. “And they are in flames.”

“With this weakening of APA, it has become easier to reach conservation parks, indigenous territories beyond,” Fonseca said. “It ultimately didn’t end up becoming the buffer it was supposed to become.”

The destruction in Triunfo do Xingu is emblematic of a wider assault on the Amazon that is picking up speed this year. While large-scale burning captured international headlines in 2019, there are already signs it could worsen this year: in July, fires surged 28% over the same period last year, according to data from INPE, Brazil’s National Institute for Space Research.

The number of fires has soared in Triunfo do Xingu too. Over the last two months, NASA satellites picked up 3,842 fire alerts in the territory. August and September – when Brazil’s fire season is normally at its peak – are expected to bring even more intense burning.

In some cases, perpetrators had previously invested in deforesting the land and are now back to finish clearing it by setting it ablaze, according to Ane Alencar, director of science at the Amazon Environmental Research Institute (IPAM). The bulk of the deforestation and burning across the Amazon is taking place on public lands that are “directly the responsibility of the government,” Alencar said. She added that many of the areas under attack have not yet been demarcated or are shielded by weak environmental protection.

“We’re seeing a huge volume of deforestation, it signals there are people investing in deforesting the Amazon,” she said during a press briefing in late July.

Like in much of the Amazon, the drivers of deforestation in Triunfo do Xingu are diverse and complex. About two-thirds of the protected area lies within São Félix do Xingu, Brazil’s largest cattle-producing municipality and home to nearly 20 times more livestock than people. Up until recently, the biggest threat to the conservation area was cattle ranching, as more and more of its forests gave way to sprawling pastures.

But environmentalists warn that new threats are gaining ground. More recently, the area has emerged as an epicenter of land-grabbing and illegal mining, amid a surge in invaders who are betting that protections on the land they are occupying will eventually be loosened or scrapped altogether.

“We have seen a wave of land-grabbing,” Fonseca said. “The pattern has changed – many of these openings are now for speculation only, not for planting or pastures.”

Environmentalists say invaders have been emboldened by President Jair Bolsonaro, who has been a vocal opponent of environmental protections and has repeatedly threatened to open up protected areas to wildcat mining. He blamed the current wave of fires engulfing the Amazon on Indigenous and traditional peoples.

“The main driver is the total lack of environmental policy from this government,” said Romulo Batista, Greenpeace Brazil’s Amazon campaigner. “People who are disposed to invading are feeling emboldened.”

The government has also been mulling a law allowing squatters to self-declare as the rightful owners of land, although the process was put on hold following an international outcry over the message it would send to landgrabbers. Environment minister Ricardo Salles, meanwhile, came under fire in May after urging the government to take advantage of the “distraction” of the coronavirus crisis to quietly weaken protections of the Amazon.

In the Xingu Basin, speculators have become bolder, feeling that the government is on their side, local sources said. Invaders have increasingly been razing small lots of land in patterns “typical of land-grabbing,” the advocacy source noted, in the hopes that this activity will eventually be legalized.

“They arrive there and start clearing – it’s completely illegal,” the source said. “And there is, behind this, a rejection of these indigenous territories and an expectation that the land they claim will eventually be legalized, that it will become theirs.”

Local sources say weaker enforcement is already having a tangible impact in the Xingu Basin. Earlier this year, Ibama agents carried out a mass crackdown on illegal mines in several Indigenous territories including Apyterewa and Trincheira Bacajá, setting the equipment they seized on fire. Just weeks later, three high-ranking Ibama officials were fired. Emboldened, the miners have resumed operations in both of these territories recently, according to local sources.

“People see this as an incentive to begin invading again,” the advocacy source said. “They feel a certain degree of security, they return knowing that nothing will happen to them.”

Faced with mounting pressure to respond to the latest wave of deforestation, the government launched a highly-publicized military operation in early May aimed at cracking down on deforestation and burning in the Amazon. Initially meant to last a month, Operation Brasil Verde 2 was recently extended until November.

In July, the federal government also imposed a moratorium on burning across the Amazon and Pantanal for 120 days, in a bid to curb illegal fires that have been spreading out of control. Across the Amazon, ranchers often burn degraded pastures to renew them and small producers prepare their plots for planting agricultural crops by setting them ablaze. Oftentimes, these blazes spread further than intended and add more pressure on forests.

But these government measures appear to have had little impact on deterring illegal deforestation and criminal burning. In June – when the federal government’s crackdown on forest clearing was in full swing – Brazil registered its highest level of deforestation in 13 years for that month. Meanwhile, satellites recorded some 1,314 fire alerts across the Amazon between July 15 and July 21, even though the moratorium on burning had already been in place for two weeks. Some 46% of these alerts were registered in the state of Pará, according to Batista.

“Combating deforestation has to be done year-round,” Batista said. “Combatting burning doesn’t happen only in the moment when the forest is already on fire.”

Meanwhile, the invasion of Indigenous lands carries even more risk now, as the COVID-19 pandemic ravages Brazil. Because of their relative isolation, Indigenous peoples tend to be more vulnerable to even common diseases. With a highly infectious virus like COVID-19, the risks are even greater for these communities, which have a history of being decimated by disease brought in from the outside.

There have already been 22,021 confirmed cases and 625 deaths among Indigenous people due to the novel coronavirus, with 148 communities affected across Brazil. The Kayapo Indigenous Territory, which is being invaded by illegal miners, has the highest number of COVID-19 cases of any Indigenous territory, according to Rede Xingu+.

Meanwhile, as the pandemic spreads into rural parts of Brazil, worries are also mounting that underfunded health networks that are already struggling to cope with COVID-19 may be further strained by patients sickened by ash and smoke. Last year, the plumes of smoke darkened the skies of Sao Paulo, thousands of kilometers away from the Amazon.

“We already have hospitals overflowing with people,” Batista said. “Now, they could end up even more overwhelmed.”