The China Lockdown – Origin of the War Against the Population of Earth, Pretense of Containing the Virus 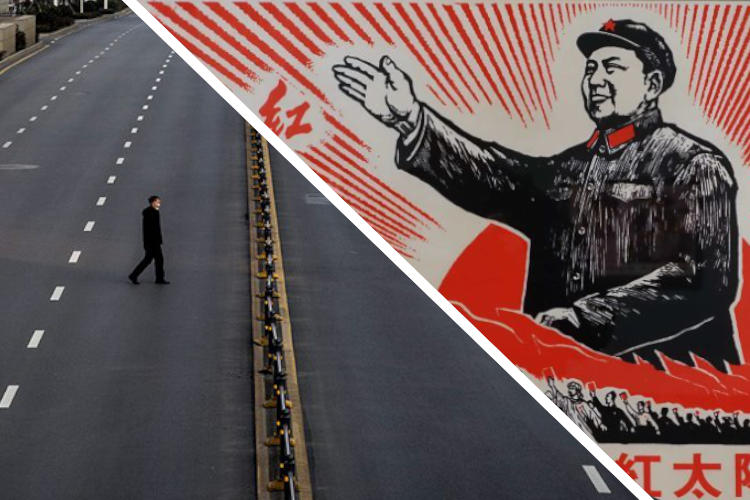 Yes, once again, dear reader, we buckle up and venture into the mad, mad world where no one proved a new and unique coronavirus exists, but where all leaders assume it does.

Brief background: once a person accepts the notion that a new virus is exploding in epic fashion across the world, he is committed to a few inescapable propositions that flow from this assumption. The most important one: nothing will stop the virus except the acquisition of natural immunity by the population.

And how would this natural immunity be gained? Through mass exposure to the germ. In other words, living life is the answer.

Not containment. Not lockdowns. The genie does not go back in the bottle.

During lockdowns, millions of people would, sitting in their homes, percolate the virus—and once let out of prison, the spread would escalate unchecked. Everywhere.

If you don’t think that is a correct picture (of their “virus world”), read numerous public health and press accounts detailing how quickly this supposed germ advanced across the planet. A lightning strike here, a lightning strike there, a strike everywhere.

For example, medicalxpress.com, July 30, 2020, reports on a CDC study published in The Lancet: “During the first 11 weeks of the COVID-19 outbreak, 32,459 COVID-19 cases were identified from 99 countries and locations outside mainland China.” Try putting that back in the bottle.

Again—the only method for victory would be mass exposure, through living, leading to mass immunity.

This is the implication of accepting the notion of a new virus rushing out from a source.

So the Chinese regime achieved nothing by locking down 50 million people. Less than nothing.

Of course, the mass lockdown model was soon copied by every nation on Earth. Amidst bursts of ecstasy, the World Health Organization and the CDC had their decades-long dream realized: CONTROL. Medical dictatorship pressing down on billions of people.

There is more to say about the Chinese lockdown. Even falsely assuming a new virus was discovered, how did Chinese authorities diagnose the early cases? They had a limited number of PCR test kits. Those they did have would register many false positives, based on cross-reactions with harmless coronaviruses—because that is what the PCR does.

On top of that, Chinese researchers and doctors were claiming pneumonia was the cardinal symptom of the new epidemic. But studies indicate roughly 300,000 people in China die every year of pneumonia—going back long before the supposed emergence of the new virus.

Early in 2020, China health authorities announced they were resorting to a different diagnostic test: CT scans of the lungs. Really? To detect the presence of a new virus? What test could be more irrelevant? It would be on the order of walking around Beijing with a blindfold on searching for a needle in a haystack in Detroit.

But nothing deterred the WHO/CDC or Bill Gates or Anthony Fauci or Donald Trump or the motley collection of political leaders around the globe. Lockdowns were laid on.

Still more: If Chinese virologists working in their Wuhan labs trying to characterize “the new coronavirus” had merely looked out the window, they would have seen the cause of the pneumonia in the city: rank deadly air pollution.

In the summer of 2019, risking arrest and disappearance, residents of several large Chinese cities, including Wuhan, had gone out into the streets protesting the air quality, which contains an unprecedented toxic mix of early industrial and modern industrial compounds.

But this fact was ignored. Instead, 50 million Chinese were imprisoned—ending those street protests, as well as the Hong Kong rebellion.

Non-discovery of a new virus; lockdown of 50 million people, the wrong action for producing immunity against a virus; the emulation of that action across the world; and here we are.

I decided to go back and comb through statements of mainstream epidemiologists who are supposed to be on “the good side of the argument.” Of course, they all believe in the existence of the virus.

I was not impressed by their remarks. At some point they appear to gargle and choke and recommend half-measures. We should open up this but lock down that. We could have put in place more stringent measures early on. They dance around the fact that, once you accept the existence of a new virus launching out into the world, there is only one cure: the acquisition of mass immunity. And you get that by living. Exposing yourself to the germ.

You can’t dance your way out of it.

I’ve never accepted the existence of a new virus. I’ve written close to two hundred articles painting an entirely different picture of what is going on, and I’ve presented a great deal of evidence for my view. I continue to do that.

Postscript: I haven’t forgotten about the vaccination addicts who actually believe injecting seven billion people is both doable and effective. Stepping into their world of fantasy and pseudoscience, even their own experts are now claiming COVID immunity—which they measure by antibody response—wanes quickly.

A vaccine would need to be injected in annual boosters, just as the seasonal flu vaccine is. So how are they doing with that flu vaccine? They report millions of flu cases and hundreds of thousands of deaths EVERY YEAR. If that’s mass immunity, a chicken is a rocket ship.

They’re going to shoot up seven billion people every year and still not attain immunity? A twisted pipe dream, even if you accept conventional vaccine theory—and I don’t.

We’re not even getting into devastating vaccine “adverse effects,” a subject I’ve been writing about and exposing for 30 years.

Suffice to say, Vaccine King Bill Gates is not only a raging sociopath, he’s wrong about his own “science.”

Judging by the failure of the flu vaccine, the logic of his position would drive him to the conclusion that a severe and permanent and forever lockdown of the global population is necessary. Unless and until the population could be reduced to an exceedingly minor fraction of its present total.

Now, if a vaccination could accomplish THAT…

This article (The China lockdown: origin of the war against the population of Earth, pretense of containing the virus) was originally created and published by Jon Rappaport’s Blog and is re-posted here with permission.