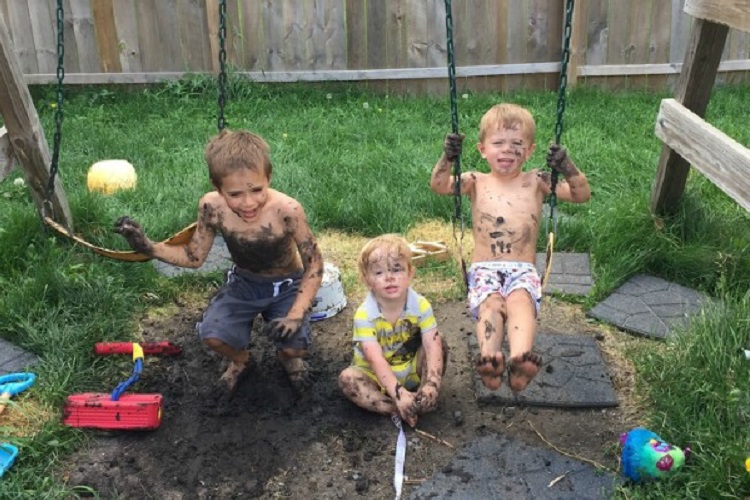 As more states and countries attempt to send children back to school amid the COVID-19 pandemic, we have seen some utterly horrifying scenarios. Masked up and shielded children of all ages are being forced to stay behind plastic sheets, dividers, and some are even kept inside polyethylene cages with little to no evidence showing its effectiveness. Depriving kids of crucial exposure to diverse bacteria may be far worse than just the psychological implications as a new study shows children’s immune systems appear to thrive when playing in the wild.

According to a new study in the October 16 issue of Science Advances, children who played in formerly gravel-covered urban day care center yards renovated with natural forest floor developed more diverse microbiomes (gut and skin bacteria) and signs of better-regulated immune systems within just one month.

The results were utterly astounding and show just how beneficial the act of being a kid and playing in the dirt can be. The study examined 75 Finnish children between the ages of 3 and 5 who were all examined prior to the changes. After only 28 days of playing on the forest floor instead of the sterilized gravel or concrete playgrounds, the children had significantly more diverse skin and gut bacteria and a stronger presence of anti-inflammatory proteins in their bodies than children in day care centers without the intervention.

In short, instead of putting kids in bubbles, we should probably let them play in the dirt.

“We were surprised that the findings were so clear even though we did not get as many participants as we had hoped,” said Aki Sinkkonen, a research scientist at the Natural Resources Institute Finland in Turku and an author of the study.

As the American Association for the Advancement of Science points out, city residents are not known for their flourishing gut microbiomes. Frequent antibiotic use and exposure to urban pollutants are believed to take a toll on the structure of city dwellers’ inner microbial communities.

Though researchers point out that the findings will require further research, this study suggests that simply being exposed to diverse microbiota from the outdoors is incredibly beneficial to building children’s resistance to infection.

Previous studies have also shown that urban populations, with their less diverse gut microbiota but greater exposure to pathogens, are more susceptible to immune-mediated diseases. While the prominent “biodiversity hypothesis” blames lack of exposure to diverse microbiota, scientists had yet to procure evidence to support this hypothesis.

“I am interested in the synergy between biodiversity conservation and actions supporting human health,” said Sinkkonen. “We wanted to find new ways to help urban children sustain health-supporting microbiota.”

To help urban children sustain health-supporting microbiota and to test their hypothesis, researchers at the University of Helsinki worked with ten daycare centers. Four of them were given new yards and transformed into green oases consisting on topsoil and a rich spread of native vegetation. Three other daycare centers took daily excursions to nearby forests. The other urban daycare centers were were left unmodified.

When the 28 day experiment was complete researchers “found that the microbiota of the children at standard day care centers that received the intervention shifted, becoming more like the microbiomes of children who attended the nature-oriented day care centers. Children at the intervention centers had more diverse Proteobacterial and Gammaproteobacterial communities on their skin after the trial, while the relative abundance of Clostridiales bacteria in their guts decreased and the diversity of Ruminococcaceae increased. Similar changes were not observed in children at the standard, unmodified day care centers.

Finland is now developing techniques to provide more biodiversity at these urban environments to provide all children with the immune boosting benefits of playing in the dirt.

Sadly, man countries, including parts of the United States, are moving in the opposite direction.

Thanks to a now verifiably incorrect campaign of fear waged by mainstream media over children returning to school, there are still millions of school children in the US alone who have been locked in their apartments or houses with no outside contact or activity.

Mainstream media has even begun to admit just how wrong they were for waging this fear campaign and admit that schools are not the super-spreading pits of contagion they were made out to be. Nevertheless, many are still arguing to keep schools entirely virtual until they are “completely safe.”

Sadly, this approach ignores costs like the mental health of children, the effects it has on lower income children, and the “toxic stress” it causes for the young. Early on in the pandemic it was clear that everyone, including scientists and doctors had no idea what to do. Since then, however, we have empirical data that shows school is safe, not only for students but for staff as well.

If we couple the new study above and the potential benefits it could provide with the fact that children are being denied the ability to return to school, the anti-openers are conducting a two pronged approach to harming children both psychologically as well as physically. Something has to change.

**This article (As Gov’t Puts Kids In Bubbles, Study Suggests Playing In The Dirt Boosts Immune Systems) was originally published at The Free Thought Project and is re-posted here with permission.**