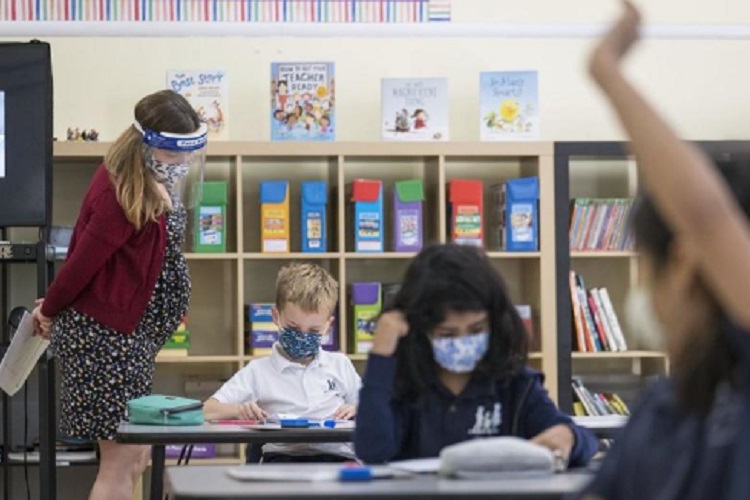 The return to schools in the US was memorably fraught with doomsayers like Dr. Fauci who at times allied with unions (particularly in America’s biggest districts like in LA, Chicago and New York) to force mayors to agree to lengthy delays of in-person education unless they acquiesced to measures on staffing and resources intended to ensure “teacher safety”.

Months later, the controversy that surrounded President Trump’s attempt to force schools around the country to reopen, something that the media raised a major stink about (accusing the president of endangering the nation’s children for the sake of something as trivial as “the economy”) has all but faded.

A surfeit of testing in the US and across Europe that was carefully monitored and studied by researchers has been carried out. And as Bloomberg reports, positivity rates in places like NYC were “extremely low” – less than 0.2%.

Though we never saw the surge in cases that some feared reopening schools might trigger, infection rates in schools have more or less tracked the rates from their surrounding community.

“You can’t really pull the school out from the community,” said Walter Gilliam, an education policy researcher at the Yale School of Medicine. “The biggest part of this, really, is how do you keep transmission rates in a county to a level that the schools even have a chance? If the transmission rates are too high, there’s just almost nothing they could do to keep it from getting into schools.”

So far, the data show that children are not major spreaders of the virus a) among themselves b) among each other and c) among their parents.

If rates of spread in the community are high, then rates in the schools will be high. This is the reasoning that undergirds decisions in France, Germany etc. that revived most of the restrictions from the springtime lockdowns, with the exception of the schools.

These trends hold true around the world, not just in the US. Research by a third-party nonprofit called Insights for Education examined data from 191 countries and found that the trend was virtually the same everywhere, with rates of infection in K-12 school systems mirroring rates in the surrounding community.

In Spain, a second wave of the virus began before schools reopened. One analysis there found that in one region cases dropped three weeks after schools reopened, in one region cases stayed flat and in others case numbers continued rising at the same rate. A new project that is collecting data on reopenings in the U.S., the COVID-19 School Response Dashboard, examined data from more than 5,000 schools across all 50 U.S. states and found that at a late-September peak, about 3% of schools reported outbreaks of five or more infections.

But, seeing as this is a Bloomberg report, the reporters note that just because ‘the experts’ were wrong about COVID-19 and its risk to the public education system doesn’t mean they were wrong about…well…everything else, too.

In the US, school openings have been complicated and confused by a White House that has downplayed the risks of in-person instruction and federal agencies that have never issued clear guidelines for safe practices. That’s left policy-making to state and local governments that are rushing to respond to the changing virus and what’s learned about it.

Whether it’s safe to open schools, said Rainu Kaushal, a clinical researcher at Cornell University’s medical school, Weill Cornell Medicine, in New York City, depends largely on two factors: How serious the spread of the virus is in the community and how seriously the community is taking precautions against the virus.

She said schools also need to be nimble.

“This virus situation evolves so rapidly that one can only make the best decision for the next few weeks,” she said. “And then you really have to take stock again.”

To be sure, while K-12 schools haven’t proved nearly as dangerous as advertised, college students remain a risk, with reports on college campuses showing large universities around the country becoming veritable petri dishes of disease. Epidemiologists will be watching the numbers as the winter progresses to see whether the virus continues to intensify heading into the new year, or whether rates finally begin to subside.