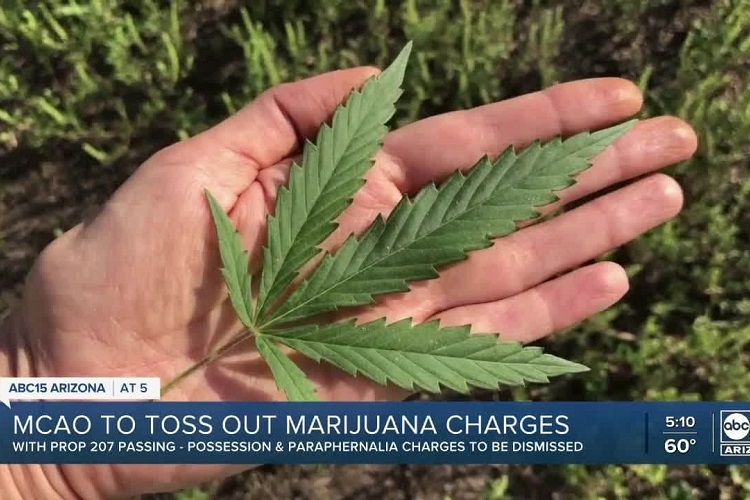 Across the country last week, Americans made their voices heard in regard to the war on drugs. A record five states legalized cannabis in some form. Montana voted to legalize cannabis for those 21 and up, New Jersey, South Dakota, and Arizona also approved recreational use and Mississippi approved medicinal use. Legal weed started from a trickle in 2012 with Washington and Colorado and has now developed into a landslide with dozens of states legalizing it in some form and a vote to legalize nationally taking place next month in Congress.

Telling cops to stop kidnapping and caging people for possessing and selling a plant that has never killed anyone, is most certainly a massive step in the direction of freedom. However, many states who have legalized cannabis forget about those who have already been kidnapped and caged for this plant. Hundreds of thousands of people are still rotting in a cages or have criminal records hanging over their heads in states where cannabis has been legalized. This is an egregious injustice and it needs to change.

Luckily, there are those in the political world who see this injustice and are moving to correct it. With the passage of Proposition 207 (the Smart and Safe Arizona Act) on Nov 3rd, Arizona’s largest county, Maricopa, decided to make that move.

This week, Maricopa County Attorney’s Office (MCAO) stated that it will go ahead and begin dismissing “all pending and unfiled charges of possession of marijuana” as well as any associated paraphernalia-related charges that are active in their office.

“Instead of continuing to spend resources on these cases, this office will begin implementing the will of the voters immediately,” the MCAO stated. Imagine that.

The motions to dismiss “will include all cases pending in Early Disposition Court, those currently in diversion or pending trial, and those set for sentencing or probation violation hearings,” the MCAO noted.

Those who are currently rotting in a cage and waiting for a trial for possessing the plant that was illegal prior to Nov. 3, will be given priority and immediately freed. And, the MCAO is also going to file motions to dismiss bench warrant cases where all the charges are covered by Prop 207.

While the move to immediately drop all current cases is certainly noteworthy, the expungements are not retroactive. Those who want to want to rid themselves of the charges hanging over their heads, must petition the state to do so. Anyone convicted previously of possessing under an ounce of marijuana, possessing paraphernalia, or six or fewer plants can petition to have their record(s) expunged but not until July 12, 2021.

The idea of a person sitting in a jail cell or being unemployable over a criminal record for something that is now legal, is vile and needs to be corrected. Other states would do well to look at Colorado and Illinois have have issued unconditional pardons to hundreds of thousands of citizens with cannabis convictions.

Colorado was the most recent and last month Governor Jared Polis signed an executive order which granted a full, unconditional pardon to everyone convicted of possession of an ounce or less of marijuana.

All individuals previously convicted in the State of Colorado of a petty offense, misdemeanor, or felony for possession of one (1) ounce or less of marijuana under the following provisions are hereby granted a full and unconditional pardon for that conviction. This Executive Order only applies to convictions of one (1) ounce or less of marijuana and no other charges or convictions are pardoned by this Executive Order.

“We are finally cleaning up some of the inequities of the past by pardoning 2,732 convictions for Coloradans who simply had an ounce of marijuana or less. It’s ridiculous how being written up for smoking a joint in the 1970’s has followed some Coloradans throughout their lives and gotten in the way of their success,” Polis said.

Illinois was before Colorado and made a similar move.

On June 25, 2019, Gov. J.B. Pritzker signed HB 1438 into law which ended cannabis prohibition and replaced it with a system to tax and regulate cannabis for adults 21 and over. But the bill didn’t stop there, it also included an automatic expungement process for those whose lives have been ruined by the state who kidnapped and caged them for possessing marijuana.

Unlike the previous measures in other states like Arizona, which fell short by requiring people with marijuana convictions to file forms and requests within arduous bureaucratic restraints, HB 1438 is automatic. People who were arrested for possessing this plant in small amounts didn’t have to do anything to have it wiped from their records.

HB 1438 will usher in one of the most sweeping criminal justice reforms so far in the cannabis movement.

In all, around 770,000 cannabis-related records will be eligible for expungement.

As more and more states legalize, those states who continue to enforce this draconian policy and lock people up for possessing a plant will find themselves not only on the wrong side of history, but left in the dust when it comes to innovation, reduced crime, and medical advancements.

**This article (After Legalizing Cannabis, Arizona Begins Dismissing Weed Charges Immediately) was originally published at The Free Thought Project and is re-posted here with permission.**