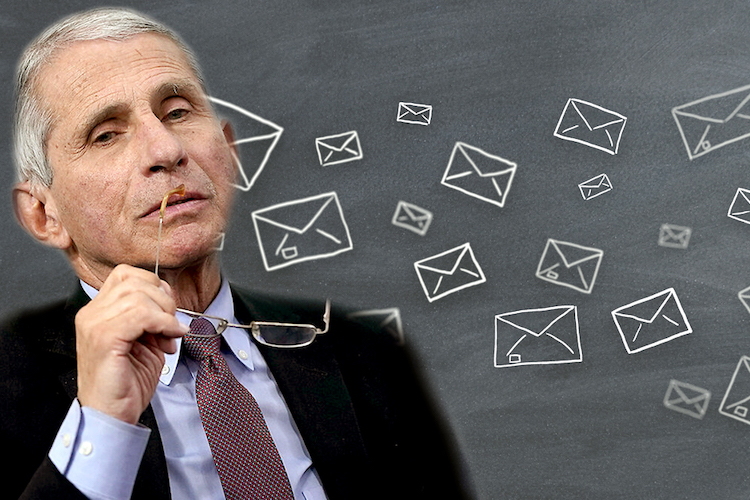 The lead author of a seminal paper promoting the theory that SARS-Co-V-2 evolved in nature deleted 5,000 tweets — and then his entire Twitter account on June 6 — after a trove of emails obtained by BuzzFeed News revealed the researcher, who originally believed the virus originated in a lab, changed his mind after corresponding with Dr. Anthony Fauci.

Emails show Dr. Kristian Andersen, author of “The Proximal Origin of SARS-CoV-2,” published March 17, 2020 in Nature, was thanked by Fauci after he flipped his position on the origin of COVID. Five months later, Andersen received nearly $2 million in government funding for virus research.

The emails also show Fauci admitted masks are best suited for sick people to help stop the spread of the virus and are not effective in protecting healthy people from COVID, and that those who have had COVID have natural immunity, so they don’t need the vaccine.

1. Microbiologist flip flops on COVID origin theory, then gets millions in NIH funding

Private emails obtained by BuzzFeed via the Freedom of Information Act show Andersen, professor of immunology and microbiology at Scripps Research Institute, told Fauci in an email on Feb.1, 2020, that SARS-CoV-2 has “unusual features” that “potentially look engineered.”

Two months later, Andersen reversed his position and published a paper stating COVID did not come from a lab and was not “a purposefully manipulated virus.”

Not long after this email, the scientists authored a piece insisting the virus was natural and Fauci said the same publicly. This is a massive cover-up.

As The Defender reported last week, Andersen’s paper played a key role in shaping the mainstream media narrative that COVID evolved naturally, and also in making certain anyone who suggested the virus might have originated in a lab was branded a conspiracy theorist.

According to Gateway Pundit, Andersen’s paper helped protect Fauci, the National Institutes of Health (NIH) and National Institute of Allergy and Infectious Diseases, which is directed by Fauci, from “potential probes” into those agencies’ funding of controversial gain-of-function virus research.

Five months after the paper was published, Andersen received $1.88 million from the NIH to fund Centers for Research in Emerging Infectious Diseases, a global network of emerging infectious disease research that studies pathogen transmission, immune system responses and pathogen/host surveillance.

Peter Daszak of EcoHealth Alliance received $1.54 million in gain-of-function research funding. Daszak is a virus hunter and mastermind behind a “bullying” letter signed by 27 scientists attacking anyone who challenged the narrative, established by Andersen’s paper, that COVID originated in nature.

Denying lab leak outright, however, WAS an actual conspiracy.

The next day after you looped Andersen in this🧵to help dunk on Cotton’s comments, he wrote to Fauci: “genome [was] inconsistent with expectations from evolutionary theory.” https://t.co/HT6rWumtg8 pic.twitter.com/13AdcL0KMW

After his emails with Fauci went public, Andersen deleted 5,000 tweets. Andersen’s account was no longer accessible on June 6, according to the internet archive The Wayback Machine, Newsweek reported.

2. Fauci tells U.S. Department of Health and Human Services secretary masks are only for the sick — but tells public something else

According to the BuzzFeed emails, in February 2020, Fauci did not believe paper masks — the kind sold at drugstores and worn by millions — protected healthy people from catching COVID. Instead, Fauci told Sylvia Burwell, former U.S. Department of Health and Human Services secretary:

“Masks are really for infected people to protect them from spreading infection to people who are not infected rather than protecting uninfected people from acquiring infection. The typical mask you buy in the drug store is not really effective in keeping out virus, which is small enough to pass through the material.”

The truth about masks. We were right. Fauci knew from the start that masks aren’t really effective in keeping out virus because the virus “is small enough to pass through the material.” #Fauciemails pic.twitter.com/1l3bX7AINh

That statement in Fauci’s private emails is far different than what he told the American public, which was that everyone may need to mask up until 2022, to stay protected from COVID and its variants.

3. Fauci admits people who have had COVID have ‘substantial immunity’

When oncologist Dr. Zeke Emanuel, former health advisor to then-President Barack Obama and a former member of Bill Clinton’s Health Care Task Force, asked Fauci via email if people who have recovered from COVID are immune to getting the virus again, Fauci replied:

“No evidence in this regard, but you would assume that there would be substantial immunity post infection.”

If people who have recovered from COVID have natural immunity to the virus, that would mean they don’t need to be vaccinated for it. Yet Fauci told Americans something very different when he said people who have had COVID still need to get the vaccine.