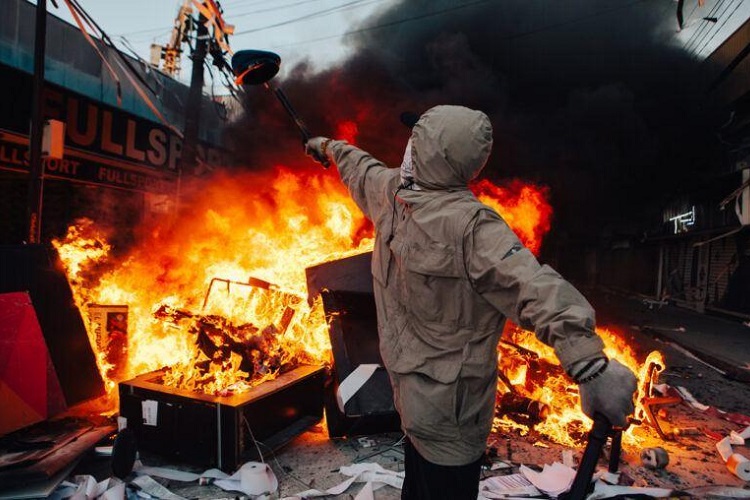 Is it time for The Hate?

It’s a question that we, like the protagonist of George Orwell’s dystopian 1984, may be asking ourselves now as we tune into a news program or click on our favorite website.

For Orwell’s Winston Smith, the Two Minutes Hate occurs at 11:00 a.m. as coworkers assemble in front of a telescreen. Together they watch as Emmanuel Goldstein, designated enemy of the Party, demands freedom of speech and an end to war. And together they scream, kick their chairs, and hurl books at Goldstein’s image.

The scene reveals the devastating effects of sustained hatred. After thirty seconds, half of the spectators are enraged. By the second minute, they are in a frenzy. As Smith reflects,

“The horrible thing about the Two Minutes Hate was not that one was obliged to act a part, but that it was impossible to avoid joining in. Within thirty seconds any pretense was always unnecessary. A hideous ecstasy of fear and vindictiveness… seemed to flow through the whole group of people like an electric current, turning one even against one’s will into a grimacing, screaming lunatic.”

It’s Oceania’s 1984. But it’s becoming America’s, too, as any news program or social media feed will confirm.

Left uninterrupted, the current of hate could start a fire we may never extinguish. But how are we to stop it?

“It’s a beautiful thing, the destruction of words”

Start with language. In 1984, one editor of the dictionary of Newspeak rhapsodizes about the destruction of words. By eliminating phrases, the Party destroys the ability of people not only to express ideas but to think them: “In the end we shall make thoughtcrime literally impossible, because there will be no words in which to express it.”

What words have ceased to exist in this dystopia? Honor, justice, and morality, to name a few. One cannot demand something one cannot express.

Today we might build our own list, starting with civility. It is elitist, we are told, to insist on treating other individuals with dignity and courtesy. To use it in some contexts, particularly at universities, is to incite a frenzy akin to The Hate.

To be safe, one must use sanctioned slogans, such as those in 1984: “War is Peace,” “Freedom is Slavery,” “Ignorance is Strength.”

And now we are on the verge of creating new slogans, such as “Riots are Peaceful Protests,” “Unequal Treatment is Equity,” “Looting is Justice.” After all, looting is “a political mode of action” that “attacks the idea of property” and the way in which it’s “unjust.”

Perhaps people really believe these mantras. Or perhaps they know that today’s Big Brothers are watching, ready to cancel them as quickly as the Party vaporizes its opponents.

“To extinguish . . . the possibility of independent thought”

But we have to resist, because as our language shrinks and twists, so does our ability to think. This is one of the two aims of the Party in 1984: to conquer the earth and “to extinguish once and for all the possibility of independent thought.”

In fact, the individual hardly matters in such a world. We are only members of a tribe, pieces of a body. “Can you not understand,” a Party member tells Winston, “that the individual is only a cell?”

A cell does not reflect or judge. This is why the Hate escalates. And because our culture, like Orwell’s 1984, is bent on rewriting or canceling history, we are losing the sources that would enable us to fight this trend morally as well as politically.

Consider Adam Smith’s warning in The Theory of Moral Sentiments that in a nation distracted by faction, a “spirit of system” takes hold, inflaming the public “to the madness of fanaticism.” “Intoxicated” by the beauty of a new system, its advocates fall for their own sophistry. Only a few individuals “preserve their judgment untainted by the general contagion.”

And so our ability to consult our conscience, our impartial spectator, the demi-god within, diminishes. We turn instead to the mob.

“We can have things for free”

Today, politicians and activists inflame mobs with lies that confirm the orthodoxy, which in 1984 means “not thinking—not needing to think. Orthodoxy is unconsciousness.”

And the most popular lies concern property. Consider Vicky Osterweil’s justification for looting:

“It also attacks the very way in which food and things are distributed. It attacks the idea of property, and it attacks the idea that in order for someone to have a roof over their head or have a meal ticket, they have to work for a boss, in order to buy things that people just like them somewhere else in the world had to make under the same conditions. It points to the way in which that’s unjust. And the reason that the world is organized that way, obviously, is for the profit of the people who own the stores and the factories. So you get to the heart of that property relation, and demonstrate that without police and without state oppression, we can have things for free.”

Never mind the process of exchange. Never mind the individual innovation that creates the products that are exchanged. Simply take away the police and “state oppression” and businessmen, and we can all have things for free.

Why didn’t Adam Smith think of that?

But if Osterweil is no great shakes at economics, she’s brilliant at Hate. Looting, she enthuses, “provides people with an imaginative sense of freedom and pleasure and helps them imagine a world that could be.” She adds, “riots and looting are experienced as sort of joyous and liberatory.”

With the promise of such delights, no wonder activists have a following. In fact, they seem to have taken Orwell’s depiction of Hate Week in 1984 as a guide. Certainly we have seen recent examples of delirium and savagery along with Orwellian phrasing: CHAZ was merely a block party, a “summer of love.”

It’s time to interrupt the current of Hate, time to name both its causes and the long-term effects on individualism and prosperity. Contra 1984, Freedom is not Slavery.