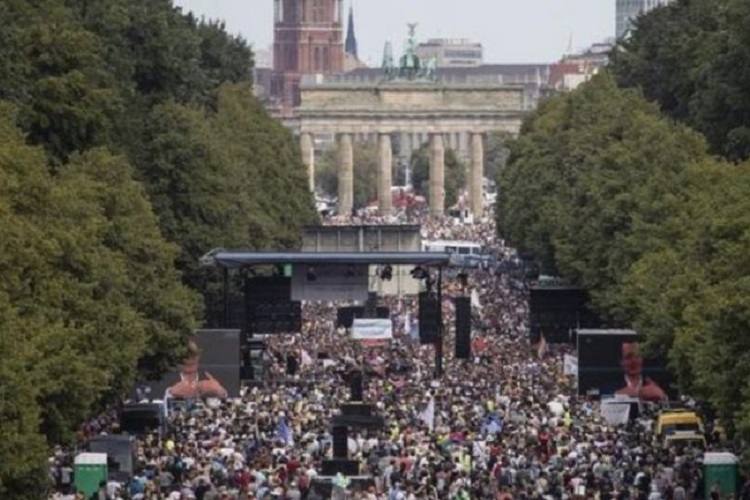 Earlier in the week, we reported that authorities in Berlin had banned a series of planned demonstrations against the country’s COVID-19 lockdown measures – claiming they were organized by “right-wing extremists” and would lead to the spread of the virus.

The city said it would deploy several thousand police around the German capital this weekend, citing threats.

Notably, the German city did not ban a June Black Lives Matter protest  in which approximately 15,000 people turned out.

Meanwhile, the Assembly for Freedom had 17,000 registered demonstrators for the August 29 event before Berlin shut it down.

“We are still in the middle of a pandemic with rising infection figures,” said Berlin Interior Minister, Andreas Geisel.

“This is not a decision against freedom of assembly, but a decision in favor of infection protection,” he continued, adding that Berlin should not be “misused as a stage for corona deniers… and right-wing extremists.”

About 20,000 people, including libertarians, constitutional loyalists, far-right supporters and anti-vaccination activists, marched in Berlin on Aug. 1.

But now, as Off-Guardian reports,  the Berlin Senate’s decision to ban the coronavirus protest planned for this weekend has been overturned by the Administrative Court.

That said, the protest will still be under some restrictions – the court ruled that the organizers must follow all the laws and restrictions they are protesting against.

According to a report from Deutsche Welle:

…the judges said protest organizers and participants must provide barriers in front of the stages where speeches will be held – and must regularly remind participants to observe social distancing rules and keep their distance.

Wearing masks was not included in the judge’s guidelines for the protest.

The court’s decision can be appealed by the Senate, but given the timeframe that seems unlikely at this stage.

Many thousands were reportedly traveling to Berlin regardless, as it was thought the protest organizers intended to go ahead in spite of the ban. A similar protest on August 1st (pictured above) drew tens of thousands of people.

The Berlin protest is taking place alongside other events around the world for a global day of action. Protests are planned for London, Ottawa, Paris and Zurich.