Across the Country, Cops Are Joining Protesters and Their Cities Aren’t Burning 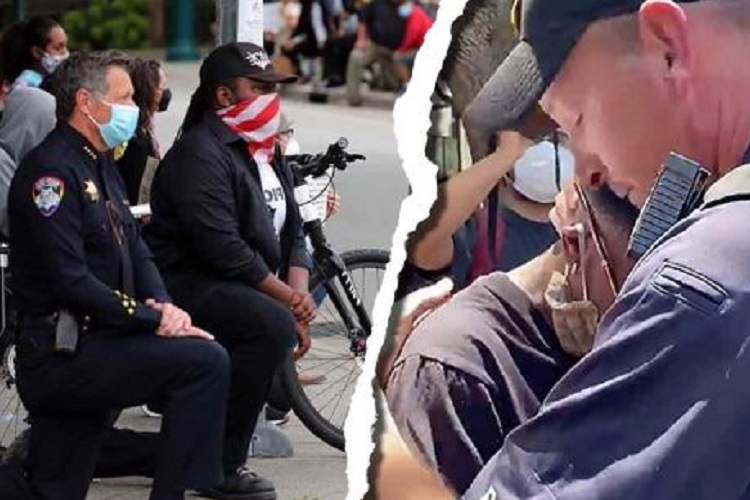 It has been one week since officer Derek Chauvin put his knee on the neck of the handcuffed George Floyd and kept it there until he died. That moment would be the catalyst for a chain reaction of events that would change the face of America…forever. In nearly every major city in the country, protests have sparked and America is quite literally burning. As the chaos unfolds, all sides of the political spectrum rush to put blame on anyone they can, shamefully avoiding the fact that this is happening because America’s law enforcement system is broken. Some cops, however, have realized this and instead of their cities burning, they joined protesters and a peaceful revolution is taking place.

Instead of doling out baton blows and rubber bullets, cops in Florida, Louisiana, New Jersey, California, Michigan, and other states, listened to the voices of their employers (the people) and made peace. Though a few of the places where police joined in with the protesters did have some conflict, the others did not, and they remained peaceful.

Forbes pointed out a few of the places where this inspiring solidarity took place:

“We want to be with y’all, for real. I took my helmet off, laid the batons down. I want to make this a parade, not a protest,” Genesee County Sheriff Chris Swanson was seen telling protesters in Flint, Michigan, before he joined the assembled crowd to march, eliciting cheers.
Officers in Camden, New Jersey, helped carry a banner reading “Standing in Solidarity,” and seemed to join in with the crowd chanting “no justice, no peace.”
In Santa Cruz, California, Police Chief Andy Mills took a knee with protesters in the pose made famous by Colin Kaepernick, with the department tweeting it was “in memory of George Floyd & bringing attention to police violence against Black people.”
Two Kansas City, Missouri, police officers⁠—one white man, one black man⁠—were photographed holding aloft a sign reading “end police brutality.”

In Fargo, North Dakota, an officer was seen clasping hands with protest organizers while holding up a sign reading “We are one race… The HUMAN race.”
Officers in Ferguson, Missouri, participated in a nine and-a-half minute kneel in Floyd’s memory, with cheers erupting from the crowd.

In Shreveport, Louisiana, protests remained peaceful and an officer even went out of his way to console a troubled protester.

According to NBC News 6 reporter Jade Jackson, the protester ” feared for their lives when the officer told them not to be on top of the courthouse statue.”

In a video — which is no longer available on Twitter for some reason — an officer went up to the person, offered consoling words and then a hug.

“I feel your pain, ok?” the officer says. “We’re all right here with you.”

The sheriff in Flint, MI led an inspiring speech and turned the protest into a “parade.”

In Portland, OR, instead of doling out baton blows and pepper spray, cops took a knee with the protesters and the protesters then began shaking hands and thanking the cops.

EARLIER: Portland cops in riot gear take a knee at the request of protesters pic.twitter.com/lcEhrbG8fa

Even in Minneapolis, which has been the hardest hit city so far, a moment of peace out shined the destruction. When an officer got separated from the rest of his group of cops, he quickly became a target from the angry crowd.

However, a group of protesters rallied around him, and served as a human shield to prevent what could have been a public execution.

an officer got separated from others and these group of black people tried to protect him from other protesters, kindly share this picture bc media won't let us see this #BlackLivesMaters pic.twitter.com/AkgPcwBMd1

As we have stated from the beginning of the riots, this reaction was inevitable. Minorities and the poor have been pushed into a corner and ignored as the state preyed on them through a system of extortion and violence. One can only be ignored for so long before they eventually lash out.

Remember when football players were peacefully protesting by taking a knee and the country — including the Commander in Chief — collectively lost their minds? Trump even called for them to be fired for this. Now, since they were ignored and told to shut up during their peaceful protests, the inevitable non-peaceful protests have begun.

The only way to stop this is to do what these cops in the examples above are doing, and that is only on the short term. To prevent any future chaos, America’s system of law enforcement needs radical change. Instead of threatening to execute suspected looters with no due process — this is the discussion we should be having right now.