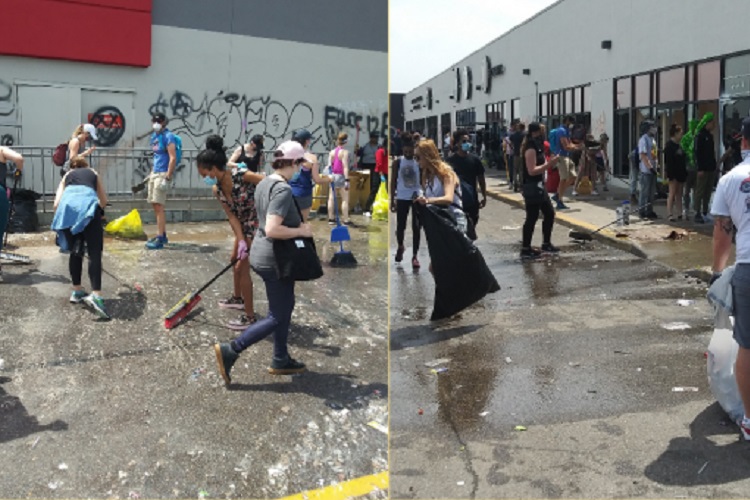 In cities across the United States this weekend, volunteers showed up in large numbers to help clean up the mess left behind from a week of unrest. The volunteers come from diverse groups with a variety of different interests and they are all coming together for a common goal.

In Minneapolis, which is where the spark of these protests began, residents were out the next morning cleaning up.

St. Paul Mayor Melvin Carter praised his community’s efforts during a recent press conference, saying that, “Across the Twin Cities yesterday, across St. Paul yesterday, we saw countless neighbors show up for each other. We saw people show up with a broom and a bucket, a rag to clean, and just work together. They weren’t cleaning their cousin’s store or their uncle’s store. They were just coming to help each other, to clean up our city.”

In Grand Rapids, Michigan, residents also turned out to clean up the streets and local businesses.

The first two pictures were taken at 3:47 a.m. this morning. The second two are right now, at 8:29 a.m. This is right across from Rosa Parks Circle in downtown Grand Rapids. @WOODTV pic.twitter.com/sthRhtBHk4

It was the same story in Pittsburgh, Pennsylvania, and many other cities throughout the country.

Thank you for your help! pic.twitter.com/88qooaErK4

Meanwhile, GoFundMe pages have been set up for local businesses that were damaged or looted in the past week. In one case, the fundraiser for a black business owner who had their bar set on fire is quickly approaching $1 million in donations.

“I would just like to start by saying the amount of gratitude in my heart right now is outweighing the sorrow and heavy-heartedness I feel. Yesterday, I was able to share my story and the outpour of financial, physical and emotional support has been overwhelming. As I think about my losses, I also want to extend my condolences to the Floyd family… My business can be rebuilt but his life cannot be regained,” business owner KB Balla said on the fundraiser page.

The police killing of George Floyd has acted as a flashpoint for the unrest that the country is experiencing, and the situation is especially volatile considering the economic difficulties that the country has been having and the fact that many people are out of work.

Below are some more pictures and video footage of people helping to clean up their local communities.

I know we all feel heartbroken.

But here is a little piece of good news: These are dozens of folks pouring into downtown to help clean up pic.twitter.com/HWsfCht76w

We're downtown this morning starting at 9, behind Louisville Downtown Partnership. We have supplies for about 60 people to help clean up. pic.twitter.com/lHGxSPAaWw

An army of volunteers are tackling the clean up in Center City and Rittenhouse. The healing process has begun. Peaceful protests splintered off into violence and looting last night… this morning were seeing the best of Philly! @6abc #PhillyProtests #PhillyCleanUp pic.twitter.com/JmRJAuoUTZ