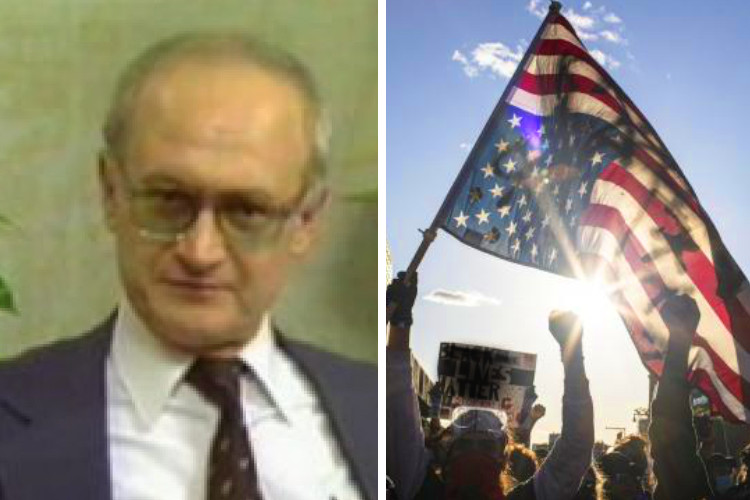 Yuri Bezmenov is a Soviet defector and former propagandist for the KGB. In the early-1980’s, he was interviewed to discuss the Soviet plan to indoctrinate American citizens into Marxism, a plan he believes was a success.

According to Bezmenov, the first stage of Socialist ‘ideological subversion’ is demoralization of the youth. During this process, a generation of American students are taught that the values and history of their nation are fundamentally corrupt, invalid, and immoral.

Through an education system and media which provide a distorted interpretation of history and philosophy, young Americans have begun to lose faith in their institutions and have rejected patriotism and national pride, granting Socialists an opportunity to provide the ‘solution’ of big government authoritarianism.

“It takes from 15 to 20 years to demoralize a nation. Why that many years? Because this is the minimum number of years which is required to educate one generation of students, in the country of your enemy, exposed to the ideology of the enemy. In other words, [the] Marxism-Leninism ideology is being pumped into the soft heads of at least three generations of American students without being challenged or counterbalanced by the basic values of Americanism—American patriotism.” – Yuri Bezmenov

Young people today are more exposed to demoralizing ‘education’ than any generation in history. College campuses are predominately occupied by socialist and communist professors who teach young adults to view our nation’s history and founding values with contempt, where the only solution is fundamental societal transformation.

“What it basically means is, to change the perception of reality of every American to such an extent that despite the abundance of information, no one is able to come to sensible conclusions in the interest of defending themselves, their families, their community and their country.” – Yuri Bezmenov


American universities use diversity and multiculturalism as a shield, erecting a perception that students are exposed to a wide variety of views before departing with their degree. However, the kind of diversity seen on college campuses these days unfortunately runs only skin deep.

Statistics illustrate the true nature of 21st century college life. The most recent study on the political identities of college professors found that liberals outnumber conservatives by a ratio of 11.5 to 1, while a study on liberal arts colleges found that a whopping 39% had no Republican-registered professors. Finally, another research team found an even greater number of self-identified Marxist professors than conservatives in the social sciences, by a ratio of almost 3 to 1.

Universities are now offering courses such as ‘The Abolition of Whiteness’ and some college professors have been caught telling students to drop their class if they hold a contrarian viewpoint on the issue of climate change.

Bezmenov’s analysis of American life is even more accurate now than it was in the 1980’s. If you’ve ever debated or attempted to converse with a modern American socialist, you have quickly seen the clear lack of interest in hearing other perspectives or information. Young people today are being taught that it’s more important to have an opinion than to think critically, hear every side of a debate, and then assess who has the best logic, facts, and reason.

“Exposure to true information does not matter anymore. A person who was demoralized is unable to assess true information; the facts tell nothing to him. Even if I shower him with information, with authentic truth, with documents, with pictures; even if I take him by force to the Soviet Union and show him [a] concentration camp, he will refuse to believe it until he is going to receive a kick in his fat bottom. When the military boot crashes, then he will understand, but not before that. That’s the tragedy of the situation of demoralization.” – Yuri Bezmenov

The second stage of Socialism is destabilization. Once Americans have been adequately brainwashed, a collapse of important societal infrastructure will inevitably follow due to the corrupt and failed nature of the Socialist system.

“This time, and it takes only 2 to 5 years to destabilize a nation, what matters is essentials. Economy, foreign relations, defense systems, and you can see it quite clearly that in some areas, in such sensitive areas as defense and economy, the influence of Marxist-Leninist ideas in the United States is absolutely fantastic.” – Yuri Bezmenov

Currently, rioters around the country are burning down government buildings in response to what they see as racism in the police force having caused the death of George Floyd. As our mass media continues to gaslight the nation by calling the riots ‘mostly peaceful’, the destruction of police stations and courthouses symbolize the collapse of faith in American institutions.

Another modern-day expression of Soviet influence on American consciousness is Alexandria Ocasio-Cortez, the most outspoken Socialist in US congress. She was endorsed by Senator Bernie Sanders who in the 1980’s honeymooned in the Soviet Union and routinely touts far-left Socialist policies.

If the Socialists reach their goal as Bezmenov outlines, our national defense will deplete, our economy will destabilize, and our standing in the world will diminish, after which the third and fourth phases may ensue. A national crisis will lead to a period of ‘normalization’ as people become accustomed to curtailed freedom, big brother intrusions, and a dependence on government for necessities such as food, healthcare, and housing justified by a time of national crisis.

“It may take only up to six weeks to bring a country to the verge of crisis. You can see it in central America now, and after [the] crisis, with a violent change of power, structure, and economy, you have the so-called period of normalization. It may last indefinitely. Normalization is a cynical expression borrowed from Soviet propaganda.” – Yuri Bezmenov

Today’s political and ideological struggle stands as a truer testament to the battle between Socialism and Americanism than anything we’ve seen before. We have the choice to stand up for freedom, or we can succumb to the dangerous and irreversible onslaught of American socialism.

This article (Former KGB Propagandist Explains How America was Destabilized and Why Socialism and Unrest Are Spreading Like Fire) as originally created and published by Waking Times and is published here under a Creative Commons license with attribution to Phillip Schneider and WakingTimes.com. It may be re-posted freely with proper attribution, author bio, and this copyright statement.