Anonymous Donor Spends $82,000 To Give $150 Gift Cards To Every Home In Small Iowa Town 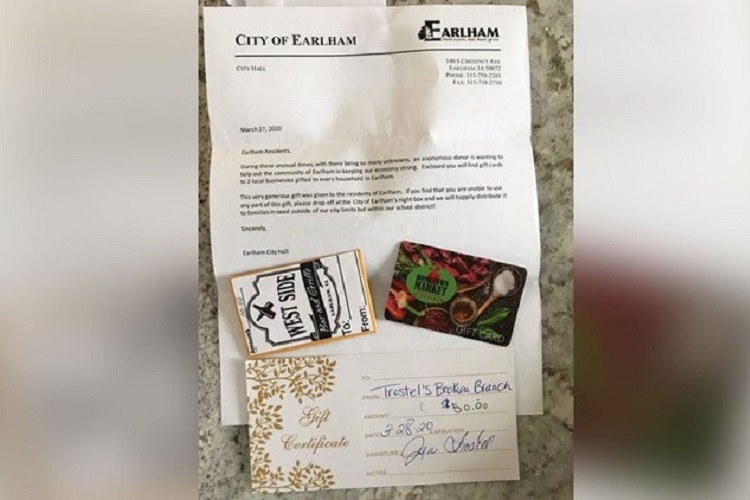 An anonymous good samaritan has come up with a clever way to help local businesses stay afloat while also giving their neighbors a nice gift during this difficult time. In the small Iowa town of Earlham, an anonymous donor contacted the town’s mayor, Jeff Lillie and told him that they were interested in doing something to help boost the local economy.

In their first conversation, the donor told the mayor that they planned on purchasing 100 gift cards from local businesses to be given to residents of the town. The donor then called back later and suggested that they would be willing to give away up to 500 gift cards. Lillie told the donor that there were only 549 households in the entire town, and they decided to give a gift card to every household in the town.

“I said to him, at 500, you’re darn near giving a gift card to every single household in Earlham. When I told him there were 549 households in town, he said ‘Done.’ And that was it. I was ecstatic because it made sure everyone would get a card,” Lillie told CNN.

The idea behind this effort is that struggling businesses will be able to get much-needed income now, and residents of the town can have a gift for the future when everything opens back up. Hopefully, these funds will be used to keep the employees paid, in addition to keeping the businesses alive.

The mayor said that he was “completely overwhelmed” by the gesture.

“It came at the end of a couple really hard weeks. I remember going home and walking through the front door, and I couldn’t speak for a minute. I was just crying like a baby, and my little boy saw me and wrapped around my leg and said, ‘Daddy what’s wrong?’ And eventually I was able to choke it out: ‘Buddy, right now, for once, nothing’s wrong.’” Lillie said.

Any of the town’s residents who feel like the donation could be put to better use by another family has been encouraged to give them away or drop them off at a bill pay slot at City Hall, where they will then be distributed to needy families in the area.

Last month, Truth Theory reported that a landlord in Jonesboro, Arkansas, has promised that his company would not be collecting rent from its restaurants during the shutdown, and instead suggested that they continue to pay their employees. In fact, landlords all over the country have been waiving rent for their tenants. However, not all landlords are giving leniency during the pandemic, there are still many people who are facing eviction under the current circumstances.

Residents of Earlham, Iowa woke up to the best gift: $150 in gift cards to local businesses, sent to all households by an anonymous donor! #UpLiftTODAY pic.twitter.com/j2EW1YfxlM