Who REALLY Controls The Mainstream Media?

However, the stark reality is that it is impossible to know just who it is that controls the MSM. Why?

It has become obvious that the usual suspects which are trotted out on the stage of alternative journalism are so far from the true locus of power and control that these corporate media behemoths are but flimsy fronts and superficial shell games. Working back through the numerous levels of stock ownership and bondholder positions, holding companies and offshore subsidiaries, interlocking directorships and corporate law firms, etc. to a layer of genuine control requires an extraordinary exercise in investigative research. Even these paper trails and audit trails will lead to a perceived ownership which is in name only. Nothing really new or eye-opening here.

Simply put, knowledge of the actual ‘owners’ has been made impossible to ascertain in this particular age … for very good reason. Why?

The following corporate entities are invariably paraded across the mind’s eye – by those who would have us believe in the Mainstream Media illusion – as the first attempt to understand how the MSM is ‘structured’, or rather constructed for public consumption. 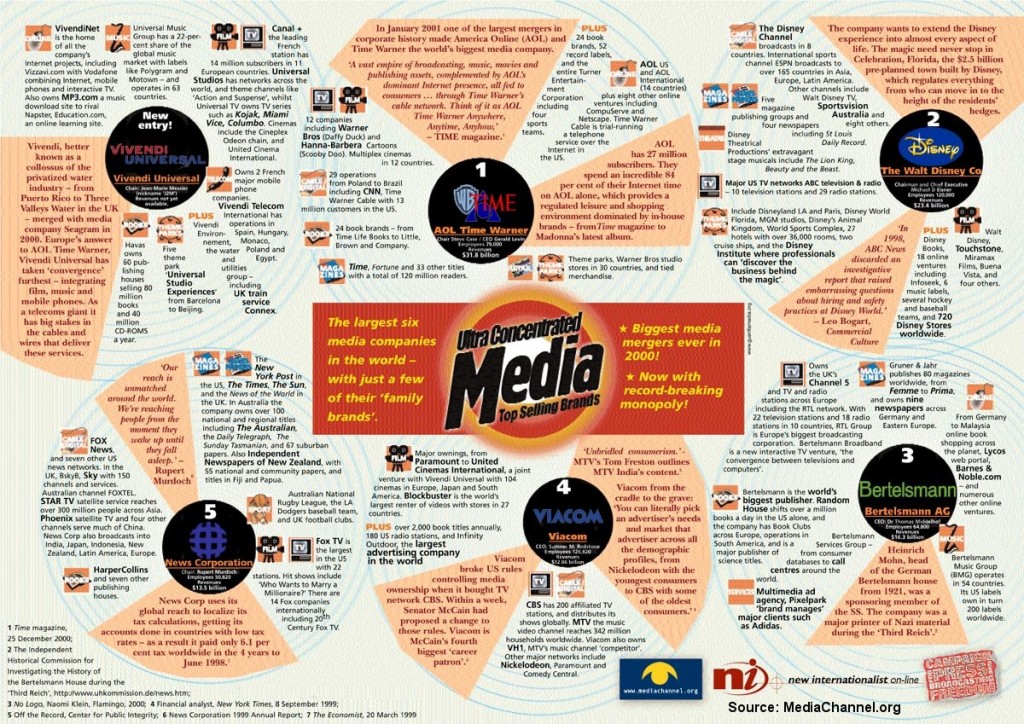 What is quite interesting about this corporate media breakdown, as well as the one that follows, is that they both omit any mention of NBC, MSNBC or NBCUniversal, which is currently a joint Comcast & General Electric partnership. 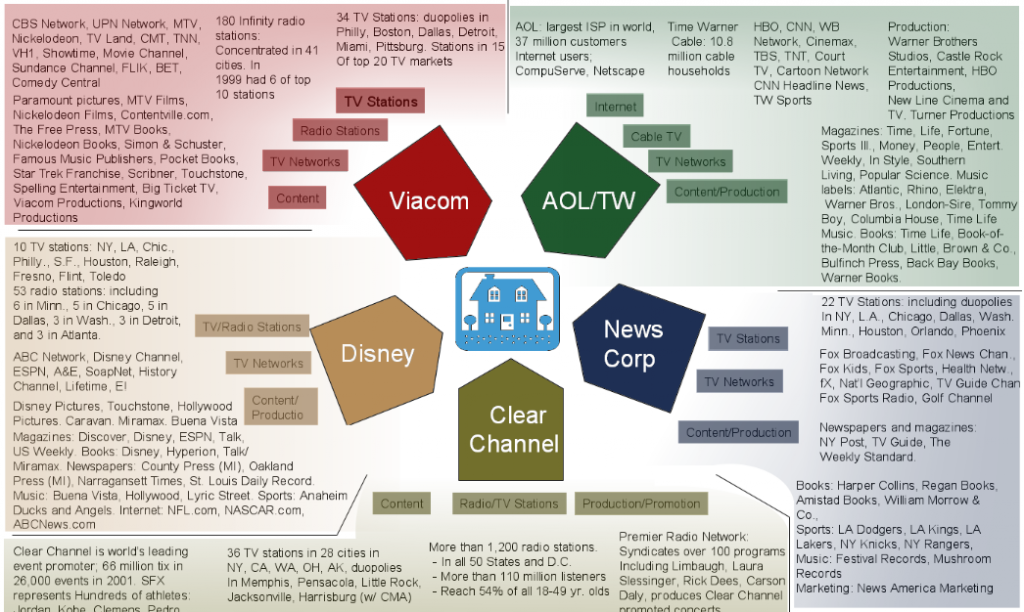 These two ownership charts are posted only with the intention of demonstrating the ruse of ownership that virtually everyone falls for, except those very few behind the scenes who are actually pulling the levers of power and pushing the buttons of control. After all, the business entity known as the CORPORATION was created as a means to essentially hide, and obfuscate and dissemble. As we have written on this website, if ever the devil were to enter into an institution in which he could conduct his devilry with efficiency, speed and success, INC would be it.

In light of this mundane reality, it’s probably a good idea to re-visit our first two “laws of the land” where it concerns authentic world rulership. As follows:

Law #1:
True worldly power never, ever reveals itself. It always stays hidden from view. If you think you see it, hear it, feel it, then it is not real power. This abiding modus operandi is what allows true worldly power to stay in the ascendant position, as well as to continue to accrue even more power unto itself.

Law #2:
Secrecy is the very essence of its grip on mundane power; therefore, it will always act with the utmost secrecy. With exposure comes vulnerability, and true worldly power will never risk such potential disclosure. Its superior position is forever maintained and solidified because it is a secret that none knows except the power itself. Even those who reside close to the peak of world power never know from whom the orders and dictates originate.

“By Their Acts Ye Shall Know Them”

Therefore, there is really only one way to back into the answer to the question in the headline. By way of massive amounts of circumstantial evidence strewn all over the planet, and especially the internet and even the MSM, one can begin to learn how to play this game of GOTCHA!. All you have to learn to do is two things (i) throw the right dots up on the radar screen and (ii) learn how to properly connect those dots. With some deductive reasoning and refined intuition, a mosaic will begin to take shape which will clearly show the intentions of those who truly control. By way of cause and effect, truth will always reveal itself. How can it not?

Then all that’s left to do is determine whose intentions might be behind any given breaking global drama, or purposefully-timed regional catastrophe or engineered national calamity. With the exception of those apocalyptic events which are directed by Mother Earth herself, all others are moved by deliberate intention. Especially during these days of unparalleled planetary transformation, each and every happening has been calculated and sculpted with great purpose. And it is the MSM’s job to make sure that purpose is kept secret and attributed to anything but the truth.

In this manner, and through awesome amounts of repetition, the followers of the MSM are virtually always guaranteed to get it wrong. And so they do, each and every time.

There are two very important pieces to this puzzle called the Mainstream Media and its true controllers. Particularly in regard to why it is so difficult to penetrate the sanctum sanctorum, it is widely recognized by those who have studied the Global Control Matrixthat anyone who ever leaves the pinnacle of worldly power never gets back on the reservation. And once they have left ….

Secondly, because there are so many layers of deception, and levels of operation, and buffering realities, an outsider would have to be Merlin to make it through in one piece. And then, be sober and sane enough to arrive at the right conclusions. The twilight of the Kali Yuga just about guarantees by its ‘density’ that certain truths may not be known by the common man or otherwise. Not even the rich and powerful will come into possession of the knowledge of who really controls the Mainstream Media. Particularly these titans of industry and commerce are kept in the dark … and for very good reason. Just look at how many fall every day – some very far and very hard – no matter what their station in life, or amount of wealth, or political influence, or position of power.

When it comes to a reckoning, as a result of ones’s inescapable destiny, all things powerful and weak will conspire to ensure that the reckoning takes place. We have to look no further than the fall of the media maven known as the Murdoch Media Empire. This global media drama has yet to run its course, and bodies are still falling all over this staged battlefield. That a once all-powerful media emperor now has no clothes has become quite the specatcle. Therefore, just how much real control can one exert – even while occupying such an exalted position – when such a perceived controller is taken down in a day and night? 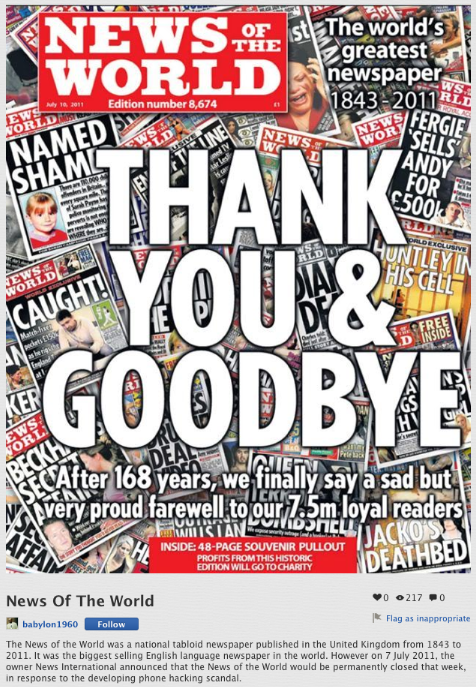 The CCRG fully recognizes that the overnight collapse of the News of the World may be a perfectly orchestrated Skakespearean tragedy staged for public consumption wherein all the key players are fully aware of their roles. On the other hand, it may not. And Murdoch et al. may be experiencing this public flogging exactly as it is playing out – in the press – just as we are experiencing it. Regardless of how much practice this particular media circus has had in advance, the effects of myriad and diverse outcomes are the very same. The world of media has profoundly and fundamentally changed … forever. A grave message* has been sent to all those who play the charade known as Mainstream Media.

*Glenn Beck did a number of shows in which numerous revelations were made about a certain family that goes by the name of Rothschild just prior to the closure of the News of the World publication. Not only was he expeditiously removed from his wildly popular platform at Fox News, which is wholly owned by News Corporation, the News of the World scandal surfaced from the deep as if from nowhere.
Irrespective of the possibility that Beck may be perfectly controlled opposition, a loud and unmistakable message was nevertheless sent across the entire spectrum ofMainstream Media.

The upshot of this analysis is that it doesn’t really matter who controls the MSM. On the other hand, knowing how to properly interpret MSM code and understanding the events that the MSM misleadingly portrays to the world can be quite helpful. The better we understand the world around us, the fewer unknowns, the less fear and anxiety. Even though we may not completely comprehend the CIA-controlled, geo-political black op, ‘Arab Spring’ fake revolution being staged in Syria at this very moment, watching this event unfold gives us deep insight into “their” M.O., goals, and grand plan for the Middle East.

Especially for those living in Syria, possessing some degree of understanding about how to decipher the true meaning of the MSM lexicon can help navigate around the many challenges which are emerging every day, as they will in the immediate future with greater impact and speed throughout that entire nation, the greater Mideast and the world at large.
Far from being an idle intellectual curiosity, we pose the question “Who REALLY Controls The Mainstream Media?” for reasons that can benefit us all … in our own respective little worlds.

So, what’s the final distillation of this essay?

“That it really makes no difference who is calling the shots at the top of the MSM pyramid because they all report to the same Highest Power. The MSM game has been set up by the Highest Power within an order that is not about to be compromised, or busted, or called out before the end of the game. It’s just not going to happen. Otherwise, you’d really see anarchy, as if we don’t see enough chaos and mayhem already, albeit most of it controlled by the controllers themselves.”

The twilight of the Kali Yuga (aka the Iron Age) has devolved into such a difficult and formidable set of circumstances that a control matrix was necessary for a certain degree of order to be maintained. Like it or not, the pervasive density of thought and emotion of our times is such that an oppressive structure was put into place millennia ago in anticipation of seven billion people populating the planet … many of them being incorrigible.

This is not to say that those of a much more refined spiritual nature required such a global game to keep us in check. However, what is indisputable is that karma is coming at us all fast and furiously. Therefore, we can rest assured that no matter who is retelling the stories on Planet Earth during this denouement, each is happening within an order of divine perfection. And each is being told exactly as we’re meant to hear it.

In the end, how we respond to the multifarious MSM narrations is all that truly matters.

This article was originally featured at Cosmic Convergence.