Zen In The Trenches 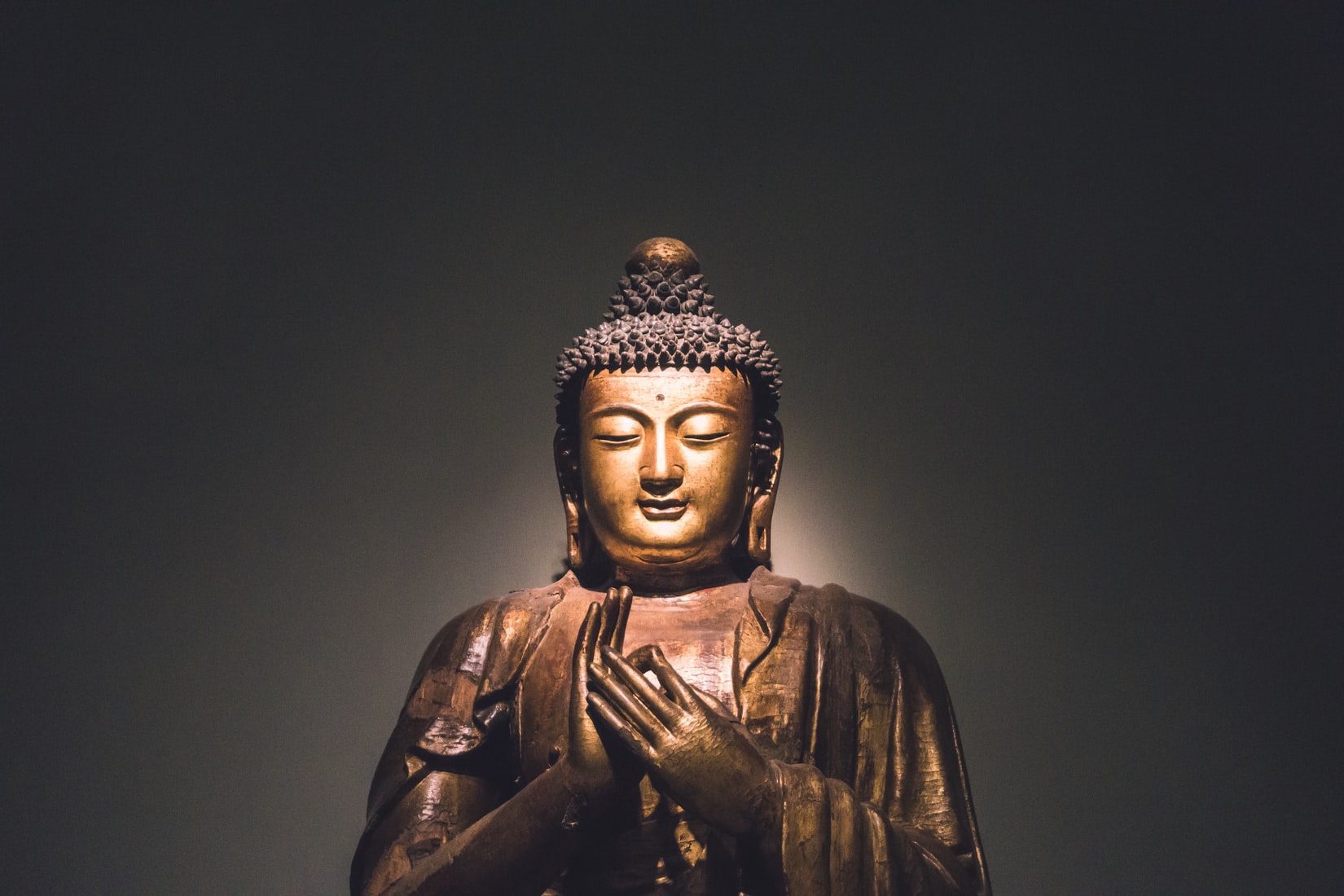 Zen is ultimately undefinable. It’s paradoxical. It’s a feeling; a meditation on opposites and interconnectedness intermittently. It’s a bridge between the unanswerable question and the unknowable answer. Even more cryptic: it’s No-mind meditating the mind into mindfulness.

No matter what Zen really is, the meditator attempting Zen is Zen. Or perhaps they are Zenning and Zen is actually a verb disguised as a noun—like God.

Either way, Zen practice is never more important than when we are in the trenches, down and out, at the bottom of the rollercoaster ride, experiencing a Dark Night of the Soul. In such a state, Zen is the great equalizer, an individuating leveling mechanism. An excuse to climb out of Hell and into Heaven. Or at least back to level ground.

“By accepting the inevitability of our shadow, we recognize that we are also what we are not. This humbling recognition restrains us from the madness of trying to eliminate those we hate or fear in the world. Self-mastery, maturity, and wisdom, are defined by our ability to hold the tension between opposites.” ~Louis G. Herman

Zen is the essence of holding the tension between opposites. It’s a proactive meditation on the paradoxical state of the human condition. It acts like a bridge between the unconscious shadow and the darkness made conscious.
When our shadow is hidden from us or repressed—either subconsciously or through willful ignorance—we feel dull, insecure, fragmented, confused, unaware, and less than whole. But when our darkness is made conscious, we fell whole, aware, open, and sharper in mind, body, and soul.

Zen teaches us how to reconcile our dark side. Deep in the trenches of our shadow, Zen plants a question mark seed made of light. Through daily cultivation and practice (attention, awareness, focus), the light brightens the darkness, and the shadow becomes a vital self-aware aspect of the overall condition. Light magnifies shadow out of repression and into self-actualization.

The most deceptive of all “trenches” is being stuck in the box of certainty. Believing that one certainly knows is the ultimate delusion. Whereas thinking that one possibly knows, but probably doesn’t, is the ultimate escape from delusion. Flexibility and open-mindedness are key. Zen can help us with both.

Zen helps us get in touch with the primordial coordinates of the interconnected cosmos. It helps us recognize the probability spectrum. When Socrates said, “The only thing I know is that I know nothing,” he was speaking in probabilities. He recognized that his was a single perception dwarfed by an unfathomably large universe. He realized that what he thought he knew was incomparably less to what he didn’t know and wisely swallowed his pride.

Better to use Zen to keep us in flow. When we are fluid and dynamic in our thinking, we are less likely to be seduced by dogmatic belief. Zen keeps us questioning to the nth degree. It keeps is open to the vital transformations the universe goes through. Zen is the art of adapting to the ebbs and flows of constant change. Being aware of this deep flow is being curious. Curiosity is the wave of change crashing over the fragile structure of our certainty. We would be wise to ride that wave straight over and learn from the destruction. The debris of which holds gold tantamount to transformative ambrosia.

“Who among you can at the same time laugh and be exalted? He who climbs upon the highest mountains laughs at all the tragedies, real or imagined.” ~Nietzsche

Anxiety is like an open wound of the psyche. And when you are down in the tranches, it can be a crippling experience. When we transform anxiety into art, we are using the stress as fuel for the fire of our imagination. The anxiety becomes a kind of eu-stress, which can be quite cathartic. Tension becomes a bridge between ‘stress’ and ‘creative outlet,’ where anxious state meets flow state.

Whether it’s transforming wounds into wisdom, demons into diamonds, or setbacks into steppingstones, the cathartic release of worry and pain can become the active components of a beautiful work of art. Pain is transformed into paint, misery into music, psychosis into poetry. And with enough practice, a kind of existential masochism can arise from the spiritual and psychological plasticity—robustness becomes antifragility.

Insofar as this existential masochism can be applied to a life well-lived, a Zen-full humor arises where all tragedies are laughable aspects of the overall cosmic joke. Life itself becomes a work of art.

“No one ever grows up. They may look grown up, but it’s a disguise. It’s just the clay of time. Men and women are still children deep in their hearts. They still would like to jump and play, but that heavy clay won’t let them.” ~Robert McCammon

Governing the precept that life is a cosmic joke, it stands to reason that we get better at laughing at the joke rather than crying over the spilled milk of being the butt-end of it. The humbling effect of Beginner’s Mind can help with this. It reminds us that we are all merely fallible creatures at the mercy of the cosmic joke. Anything else is mere hypocrisy. Especially the title of “grown up.”

The Zen of Beginner’s Mind is the art of tapping into that playful innocence which refuses to be serious but is always sincere. It counters the hypocrisy of the human condition with a sense of playfulness. From which a creative adaptation and improvisation arises. We are fallible creatures? So be it. We are hypocritical naked apes? Might as well have a sense of humor about it. It’s all laughable in the grand scheme of things? We might as well have a laugh.

Adopting a good sense of humor is the best tool we can utilize while in the tranches. It can get us through just about anything. And even if it doesn’t, at least we’re laughing. Our inner child teaches us how to laugh and play through the misery, rather than just be miserable.

Even in the trenches, we have a choice to be healthy or not. Even in the gutter, we can either drown in our own tears or flip over, take a deep breath, and regard the stars their aesthetic splendor. Yes. Even beauty itself can be healing. And beauty combined with a good sense of humor can be transcendent… Skipping through Hell with bells on. Laughing into the abyss. Mocking all devils, demons, angels, and gods. Using it all as a sharpening stone.

That’s Zen in the trenches.

We either play the victim and wallow in self-pity, or we rise up with a ‘humor of the most high’ and dare to become healthier. In the alchemical transformation of the human condition, Hell is the forge folding the blade of the soul into a sharper instrument.

Our comfort zone just isn’t hot enough. Heaven is too soft. Purgatory is too comfortable. Hell is just right, as long as we don’t make the mistake of losing ourselves there and burning ourselves out. We must remember to kill the devil first, and then make our way back to the “tribe” to inform them that there’s nothing to be afraid of anymore.

Zen in the trenches is no walk in the park. It takes daring and flexibility. It takes moxie and mettle. It takes a good sense of humor despite a meaningless universe. It takes emotional alchemy and existential masochism to deal with the pain and suffering.

Practicing Zen in the trenches is whistling, “Always look on the bright side of life” while nailed to a cross (The Life of Brian). It’s creating meaning out of nothingness, building bridges out of bandages, birthing a Phoenix out of ashes. It’s laughing and playing and dancing despite the slings and arrows and in spite of the ever-tightening mortal coil. Indeed.

As Rabelais said, “For all your ills, I give you laughter.”