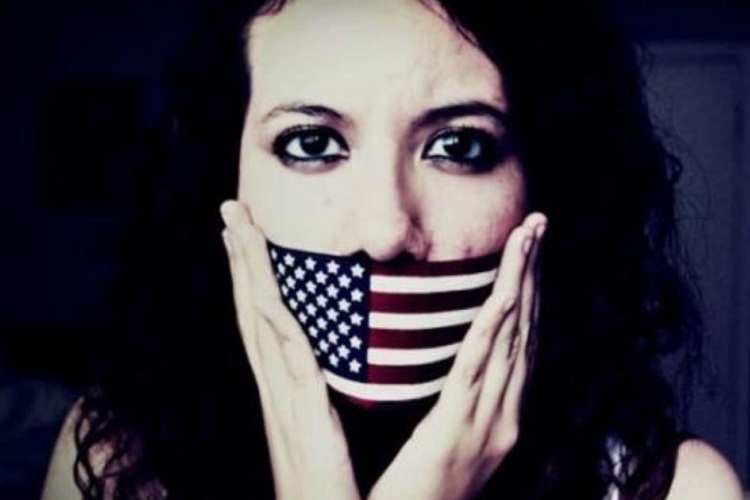 Despite all appearances to the contrary, martial law has not been declared in America.

We still have rights.

The government may act as if its police state powers suppress individual liberties during this COVID-19 pandemic, but for all intents and purposes, the Constitution—especially the battered, besieged Bill of Rights—still stands in theory, if not in practice.

Indeed, while federal and state governments have adopted specific restrictive measures in an effort to lockdown the nation and decelerate the spread of the COVID-19 virus, the current public health situation has not resulted in the suspension of fundamental constitutional rights such as freedom of speech and the right of assembly.

Mind you, that’s not to say that the government has not tried its best to weaponize this crisis as it has weaponized so many other crises in order to expand its powers and silence its critics.

All over the country, government officials are using COVID-19 restrictions to muzzle protesters.

It doesn’t matter what the protest is about (church assemblies, the right to work, the timing for re-opening the country, discontent over police brutality, etc.): this is activity the First Amendment protects vociferously with only one qualification—that it be peaceful.

Yet even peaceful protesters mindful of the need to adhere to social distancing guidelines because of this COVID-19 are being muzzled, arrested and fined.

For example, a Maryland family was reportedly threatened with up to a year in jail and a $5000 fine if they dared to publicly protest the injustice of their son’s execution by a SWAT team.

If anyone had a legitimate reason to get out in the streets and protest, it’s the Lemp family, whose 21-year-old son Duncan was gunned down in his bedroom during an early morning, no-knock SWAT team raid on his family’s home.

It was 4:30 a.m. on March 12, 2020, in the midst of a COVID-19 pandemic that has most of the country under a partial lockdown and sheltering at home, when this masked SWAT team—deployed to execute a “high risk” search warrant for unauthorized firearms—stormed the suburban house where 21-year-old Duncan, a software engineer and Second Amendment advocate, lived with his parents and 19-year-old brother.

The entire household, including Lemp and his girlfriend, was reportedly asleep when the SWAT team directed flash bang grenades and gunfire through Lemp’s bedroom window.

Lemp was killed and his girlfriend injured.

No one in the house that morning, including Lemp, had a criminal record.

No one in the house that morning, including Lemp, was considered an “imminent threat” to law enforcement or the public, at least not according to the search warrant.

Now what was so urgent that militarized police felt compelled to employ battlefield tactics in the pre-dawn hours of a day when most people are asleep in bed, not to mention stuck at home as part of a nationwide lockdown?

According to police, they were tipped off that Lemp was in possession of “firearms.”

So instead of approaching the house by the front door at a reasonable hour in order to investigate this complaint—which is what the Fourth Amendment requires—police instead strapped on their guns, loaded up their flash bang grenades and acted like battle-crazed warriors.

This is the blowback from all that military weaponry flowing to domestic police departments.

This is what happens when you use SWAT teams to carry out routine search warrants.

This is what happens when you adopt red flag gun laws, which Maryland did in 2018, painting anyone who might be in possession of a gun—legal or otherwise—as a threat that must be neutralized.

These red flag gun laws allow the police to remove guns from people merely suspected of being threats.

While in theory it appears perfectly reasonable to want to “stop dangerous people before they act,” where the problem arises is when you put the power to determine who is a potential danger in the hands of government agencies, the courts and the police.

Remember, this is the same government that uses the words “anti-government,” “extremist” and “terrorist” interchangeably.

This is the same government that keeps re-upping the National Defense Authorization Act (NDAA), which allows the military to arrest and detain American citizens with no access to friends, family or the courts if the government believes them to be a threat.

This is the same government that has a growing list—shared with fusion centers and law enforcement agencies—of ideologies, behaviors, affiliations and other characteristics that could flag someone as suspicious and result in their being labeled potential enemies of the state.

Let that sink in a moment.

If you believe in and exercise your rights under the Constitution (namely, your right to speak freely, worship freely, associate with like-minded individuals who share your political views, criticize the government, own a weapon, demand a warrant before being questioned or searched, or any other activity viewed as potentially anti-government, racist, bigoted, anarchic or sovereign), you are most likely at the top of the government’s terrorism watch list.

Moreover, as a New York Times editorial warns, you may be an anti-government extremist (a.k.a. domestic terrorist) in the eyes of the police if you are afraid that the government is plotting to confiscate your firearms, if you believe the economy is about to collapse and the government will soon declare martial law, or if you display an unusual number of political and/or ideological bumper stickers on your car.

Needless to say, if you happen to be passionate about the Constitution and a vocal critic of government corruption, you’ve already been flagged in a government database somewhere.

Likely, Lemp was, too.

Now Lemp is dead and his family is devastated, outraged and desperate to make sense of what appears to be an insensible act of violence resulting in an inexcusable loss of life.

As usual in these kinds of shootings, government officials have not been forthcoming with details about the shooting: police have refused to meet with family members, the contents of the warrant supporting the raid have not been revealed, and bodycam footage of the raid has not been disclosed.

So in order to voice their objections to police violence and demand answers about the shooting, Lemp’s family and friends planned to conduct an outdoor public demonstration—adhering to social distancing guidelines—only to be threatened with arrest, a year in jail and a $5000 fine for violating Maryland’s stay at home orders.

Yet here’s the thing: we don’t have to be muzzled and remain silent about government corruption, violence and misconduct just because we’re wearing masks and social distancing.

That’s not the point of this whole COVID-19 exercise, or is it?

While there is a moral responsibility to not endanger other lives with our actions, that does not mean relinquishing all of our freedoms.

Be responsible in how you exercise your freedoms, but don’t allow yourselves to be muzzled or your individual freedoms to be undermined.

Understandably, no one wants to talk about individual freedoms when tens of thousands of people the world over are dying, and yet we must.

The decisions we make right now—about freedom, commerce, free will, how we care for the least of these in our communities, what it means to provide individuals and businesses with a safety net, how far we allow the government to go in “protecting” us against this virus, etc.—will haunt us for a long time to come.

At times like these, when emotions are heightened, fear dominates, common sense is in short supply, liberty takes a backseat to public safety, and democratic societies approach the tipping point towards mob rule, there is a tendency to cast those who exercise their individual freedoms (to freely speak, associate, assemble, protest, pursue a living, engage in commerce, etc.) as foolishly reckless, criminally selfish, or outright villains.

Sometimes that is true, but not always.

As I make clear in my book Battlefield America: The War on the American People, there is always a balancing test between individual freedoms and the communal good.

What we must figure out is how to strike a balance that allows us to protect those who need protecting without leaving us chained and in bondage to the police state.

We must find ways to mitigate against this contagion needlessly claiming any more lives and crippling any more communities, but let’s not lose our heads: blindly following the path of least resistance—acquiescing without question to whatever the government dictates—can only lead to more misery, suffering and the erection of a totalitarian regime in which there is no balance.

Constitutional attorney and author John W. Whitehead is founder and president of The Rutherford Institute, where this article (Your Freedoms Don’t Have to Be Muzzled Just Because You’re Wearing a Mask) was originally published. He is the author of A Government of Wolves: The Emerging American Police State and The Change Manifesto.