Why The Push Is On To Make Pandemic Life ‘Permanent’ 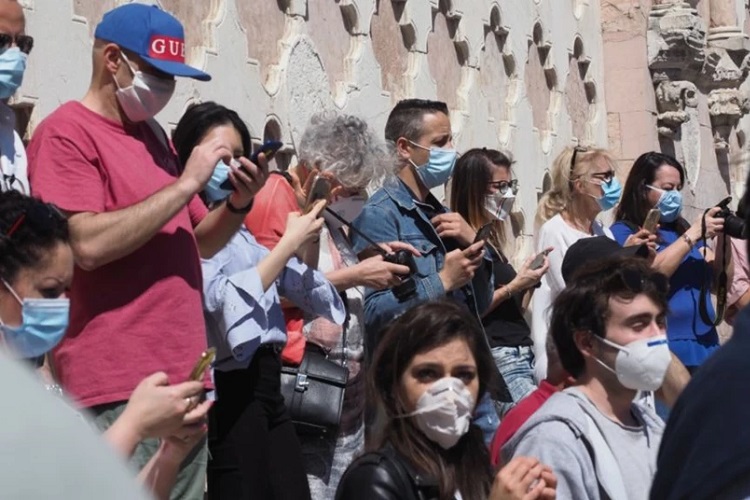 One year after Americans were ordered to close down society for “two weeks to flatten the curve,” Bloomberg columnist Andreas Kluth warned, “We Must Start Planning for a Permanent Pandemic.”

“Get back to normal” means recovering the relative liberty we had in our already overregulated, pre-Covid lives. This is just the latest in a long series of crises that always seem to lead our wise rulers to the same conclusion: we just cannot afford freedom anymore.

Covid-19 certainly wasn’t the beginning. Americans were told “the world changed” after 9/11. Basic pillars of the American system, like the Fourth and Fifth Amendments, were too antiquated to deal with the “new threat of terrorism.” Warrantless surveillance of our phone, e-mail, and financial records and physical searches of our persons without probable cause of a crime became the norm. A few principled civil libertarians dissented, but the public largely complied without protest.

“Keep us safe,” they told the government, no matter the cost in dollars or liberty.

Perhaps seeing how willingly the public rolled over for the political right during the “War on Terror,” authoritarians on the left turbocharged their own war on “climate change.” Previously interested in merely significantly raising taxes and heavily regulating industry, they now wish to ban all sorts of things, including air travel, gasoline-powered cars, and even eating meat.

Since Covid-19, however, even the freedom to assemble and see each other’s faces may be permanently banned to help the government “keep us safe.”

George W. Bush warned Saddam Hussein had “weapons of mass destruction” capable of hitting New York City within 45 minutes. He created the Department of Homeland Security and the TSA to prevent, among other things, a “mushroom cloud” over a major American city.

Twenty years later, we know there were no weapons of mass destruction in Iraq, the terrorist threat was grossly exaggerated, and the TSA has still never caught a terrorist, not even the two people who tried to set off explosives concealed in their shoes and underwear, respectively.

The only effective deterrent of terrorism so far has been the relatively calmer foreign policy during the four years of the Trump administration, during which regime change operations ceased and major terrorist attacks in the United States virtually disappeared.

Predictions of environmental catastrophe have similarly proven false. Younger people may not remember that in the early 1970s, long before Alexandria Ocasio-Cortez was born, environmentalists were predicting worldwide disasters that subsequently failed to materialize. In 1989, the Associated Press reported, “A senior U.N. environmental official says entire nations could be wiped off the face of the Earth by rising sea levels if the global warming trend is not reversed by the year 2000.” The same official predicted the Earth’s temperature would rise 1 to 7 degrees in the next 30 years.

Ocasio-Cortez is famous for predicting in 2019, “The world is gonna end in 12 years if we don’t address climate change.” But Al Gore had warned in 2006 that “unless drastic measures to reduce greenhouse gases are taken within the next 10 years, the world will reach a point of no return.” So, isn’t it too late anyway?

As with the war on terrorism, the war on climate change asks us to give up our freedom for solutions that don’t work. Assuming climate change proponents have diagnosed the problem correctly and haven’t exaggerated the threat—huge assumptions by themselves— implementing their proposed solution won’t solve the problem, even by their own standards.

Its proponents know this. The U.S. has already led the world in reducing carbon emissions without the draconian provisions of the Green New Deal. If you listen to them carefully, the Green New Deal’s proponents propose the U.S. give up what freedom and prosperity remain to them merely as an example to developing nations, whom they assume will forego the benefits of industrialization already enjoyed by developed countries because of the shining example of an America in chains and brought to its economic knees to “save the earth.”

The latest remake of this horror movie is Covid-19. While undeniably a serious pathogen that has likely killed more people than even the worst flu epidemics of the past several decades (although this is hard to confirm since public health officials changed the methodology for determining a virus-caused death), the government and its minions have still managed to grossly exaggerate this threat.

Gone is any sense of proportion when discussing Covid-19. Yes, it is certainly possible to spread the virus after one has been vaccinated or acquired natural immunity. But how likely is it? Is it any more likely than spreading other pathogens after immunity?

If not, then why are we treating people with immunity differently than we have during more dangerous pandemics in the past? Similarly, it is likely possible for asymptomatic people to spread the virus—a key pillar of the lockdown argument—but again, how likely is it?

The theory Covid-19 could be spread by asymptomatic people was originally based on the case of a single woman who supposedly infected four other people while experiencing no symptoms. Anthony Fauci said this case “lays the question to rest.”

The only problem was no one had asked the woman in question if she had symptoms at the time. When it turned out she did, the study on her was retracted. A subsequent study “did not link any COVID-19 cases to asymptomatic carriers,” and yet another after that concluded transmission of the disease by asymptomatic carriers “is not a major driver of spread.” Yet, policies based on this falsehood, like lockdowns and forcing asymptomatic people to wear masks, remain in place.

Most importantly, none of the government-mandated Covid-19 mitigation policies work. No retrospective review conducted with any semblance of the scientific method has found a relationship between lockdowns, mask mandates, or social distancing and the spread of Covid-19. In fact, the most recent study suggests lockdowns may have increased Covid-19 infections, in addition to all the non-Covid excess deaths they caused.

Over and over, authoritarians overhype crises to scare the living daylights out of the public and propose solutions that have two things in common: they demand more of our freedom and they don’t work. It’s always all pain and no gain. One wonders how many repetitions of this crisis drill it will take before the citizens of the so-called “land of the free” finally think to ask:

Why is freedom always the problem?

Tom Mullen is the author of Where Do Conservatives and Liberals Come From? And What Ever Happened to Life, Liberty and the Pursuit of Happiness? and A Return to Common  Sense: Reawakening Liberty in the Inhabitants of America. For more information and more of Tom’s writing, visit www.tommullen.net.