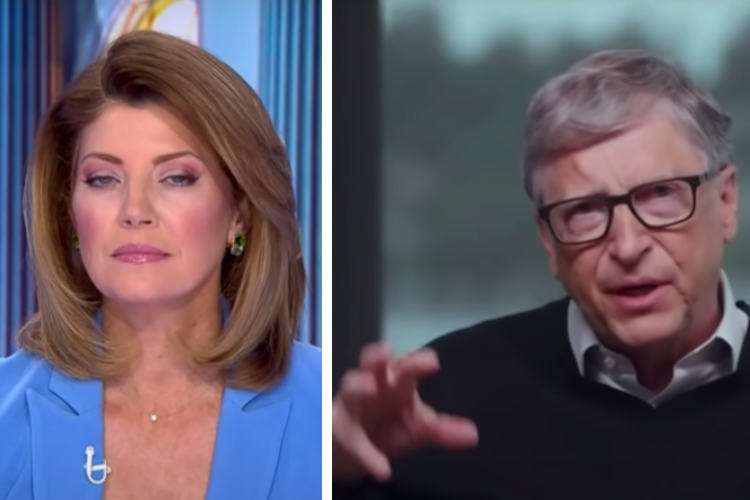 Bill Gates is back all over the media in recent days. making a few comments that help us to further understand his position on mass vaccination and the risks associated.

Firstly, though, it’s important to note that Gates also recently making a point to warn his audience and his believers that lies are spreading faster than truth.

“Very incorrect things that are very titillating…can spread much faster than the truth on social media, and we’ve always seen that with vaccines….social media can make that even worse…these social media companies can see what is being said on their platform and take things that are absolutely wrong and remove those things from the platform.

“How you divide that up, and draw that line…these are complex issues. It has been a spreader of lot of things…and how do you strike a balance?”

The establishment is working very hard to dominate the narrative on Covid-19, and with these comments, Bill Gates has thrown himself into the censorship arena, warning the poor public that dangerous information is the latest and greatest threat.

Gates’ publicly stated intention to deliver ‘7 billion vaccines to healthy people‘ is no secret. But this elaborate business plan, in which his foundation has hundreds of millions of dollars invested, will not work if the public distrusts a vaccine or simply does not trust the ‘authorities.’

To address this problem, a Gates funded pandemic simulation in 2019, Event 201, outlined a strategy called ‘the flood’ aimed at flooding the internet with information favorable to the mission of the WHO, Gates Foundation, et al. Journalist Derrick Broze covered this in detail here.

The other major component of controlling the narrative on the need and effectiveness of a mass vaccine involves minimizing known and probable risks of such vaccines. Bill Gates has said in his own blog that mRNA and DNA vaccines will be the most likely candidates for a global vaccine, given that the vaccine could be produced without needing actual cultures of CV-19, instead using synthesized DNA of the virus. This would introduce a new level of risk, given that these types of vaccines have never yet been approved for human use.

We were hit by fact checkers when we tried to bring this information to the public, and subsequently found a Moderna white paper expressing the company’s uncertainty of the negative effects of DNA vaccines.

You have to understand that this is an unreal amount of money at stake here. Hundreds of billions are being invested in the search for a CV-19 vaccine, and to up the ante considerably, the stock market is now severely affected anytime any news of promise or failure in a vaccine is released. This has all been positioned so that the entire world economy hinges on whether or not a vaccine is found.

Given this dynamic, of course a business man like Gates is going to downplay the risks while talking up the dire need for his product. It’s sales 101.

In 2017, he did bring it up risk in reference to a visit with President Trump, saying that Trump asked him for his opinion on setting up a commission looking at the ill effects of vaccines.

“…Robert Kennedy Jr. was advising him that vaccines were causing bad things and I said ‘no, that’s a dead end, that would be a bad thing, don’t do that.” [Source]

Looking at the potential negative effects of vaccines is a ‘bad thing’ according to Bill Gates, who, again, personally has hundreds of millions of dollars invested in a CV-19 vaccine alone. Why would considering the risks of a medicine be considered a ‘bad thing?’ This is especially telling given the backdrop of heavy censorship of information about hydroxychloroquine.

If you were to approach the Chairman of the Joint Chiefs of Staff and tell him that thousands of innocent people were dying of bomb and drone strikes, the head of the US Military would absolutely tell you that collateral damage is just a cost of war. The developers of the bombs would also call the dead collateral damage, in the name of a greater good.

That’s what Gates is doing here in this interview, he is downplaying the risks and brushing off anyone negatively impacted, in order to give the impression that the benefits of his business plan outweigh the potential harms.

Norah O’Donnell: “After the second dose at least 80 percent of participants experienced a systemic side effect, ranging from severe chills to fevers. So, are these vaccines safe?”

Bill Gates: “Well the, uh, the FDA, not being pressured, will look hard at that. The FDA is the gold standard of regulators, uh, and their current guidance on this, if they stick with that, is, is very, very appropriate. Uh, and, you know, they, it, and, the, the side effects were not super severe, that is it didn’t cause permanent health problems for the things, uh, you know, Moderna did have to go with the fairly high dose, and so, uh, you know, to get the antibodies, some of the other vaccines, uh, are going, able to go with lower doses to get, uh, responses that are, are pretty high, including the JMJ and the Phizer. So, there’s a lot of characteristics of these vaccines, uh, it’s great that we have multiple of them, uh, that are going out there…

Norah O’Donnell: “You know the data better than I do, but Bill, the data that everybody with a high dose had a side effect.”

Bill Gates: “Yeah, but some of that is not dramatic, where it’s just, you know super painful, but yes, they’re, we need to make sure there’s not severe side effects. The FDA, uh, I, I, I think will do a good job of that, uh despite the pressure.”

Norah O’Donnell: “How many doses of the vaccine will we need?”

Bill Gates: ‘None of the vaccines at this point appear like they’ll work with a single dose. That was the hope at the very beginning, uh, maybe one of them, particularly in the second generation will surprise us. We hope just two [doses], although in the elderly sometimes, uh, it takes more, and so making sure we have lots of elderly people in the trial will give us that data.”

Here is that clip:

Even CBS pressures Bill Gates on the topic that almost everyone had side effects. He doesn’t seem to care.
pic.twitter.com/2SiBmowJo3

In short, Gates just passed the buck for vaccine safety to the FDA, diminished serious side effects as collateral damage in the process to invent this vaccine, and also planted the seed in public consciousness that multiple doses will be required. Let that sink in.

This article (sWATCH: Bill Gates’ Recent Comments on CV-19 Vaccine Side Effects Are Typical of Big Business) originally created and published by Waking Times and is published here under a Creative Commons license with attribution to Alex Pietrowski and WakingTimes.com.