Want to See a Concert? Ticketmaster Wants You To Prove That You’ve Been Vaccinated First 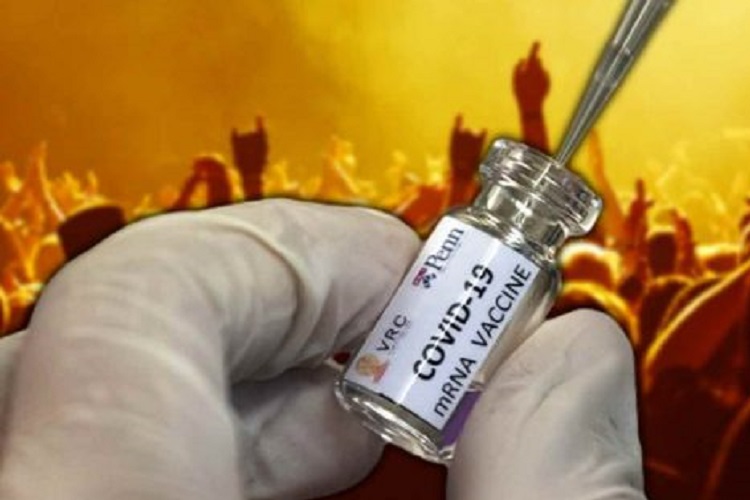 This week, the stock market exploded and Americans were given a renewed sense of hope when pharmaceutical company Pfizer announced that their new COVID-19 vaccine showed a 90% efficacy rate on an initial clinical trials.

According to Pfizer, the results of their Phase 3 trial, shows its vaccine is far more effective than the seasonal flu shot — which had a dismal efficacy rate of 29 percent during the 2018-19 flu season, according to Centers for Disease and Control statistics.

After news of Pfizer’s purported vaccine success, the concert ticket giant, Ticketmaster announced a rather controversial move. Hoping to resume the concert scene in 2021, Ticketmaster has been working on a framework that will make concertgoers prove they have received the vaccine before attending a show.

If you cannot prove vaccination, you cannot enter the show unless, of course, you get tested within a 24-72 hour window beforehand and submit this information to the concert giant. As it is against the law for unauthorized outside parties to view an individual’s health record, Ticketmaster will rely on three separate components for their plan — which is still in its development stages.

According to their plan, the Ticketmaster digital ticket app, third party health information companies like CLEAR Health Pass or IBM’s Digital Health Pass and testing and vaccine distribution providers like Labcorp and the CVS Minute Clinic will work together to determine your concert eligibility.

Here’s how it would work, if approved: After purchasing a ticket for a concert, fans would need to verify that they have already been vaccinated (which would provide approximately one year of COVID-19 protection) or test negative for coronavirus approximately 24 to 72 hours prior to the concert. The length of coverage a test would provide would be governed by regional health authorities — if attendees of a Friday night concert had to be tested 48 hours in advance, most could start the testing process the day before the event. If it was a 24-hour window,  most people would likely be tested the same day of the event at a lab or a health clinic.

Once the test was complete, the fan would instruct the lab to deliver the results to their health pass company, like CLEAR or IBM. If the tests were negative, or the fan was vaccinated, the health pass company would verify the attendee’s COVID-19 status to Ticketmaster, which would then issue the fan the credentials needed to access the event. If a fan tested positive or didn’t take a test to verify their status, they would not be granted access to the event. There are still many details to work out, but the goal of the program is for fans to take care of vaccines and testing prior to the concert and not show up hoping to be tested onsite.

Ticketmaster would not store or have access to fans’ medical records and would only receive verification of whether a fan is cleared to attend an event on a given date. Different states will have different requirements. The main role of companies like health pass companies will be to collect data from testing and medical providers and deliver status updates to partner companies in a secure, encrypted way that complies with the Health Insurance Portability and Accountability Act (HIPAA).

Currently, the FDA has not approved any third party companies to distribute real time vaccination data but Ticketmaster president Mark Yovich told Billboard he expects demand for digital screening services to skyrocket once a vaccination is ultimately approved and distributed.

“We’re already seeing many third-party health care providers prepare to handle the vetting — whether that is getting a vaccine, taking a test or other methods of review and approval — which could then be linked via a digital ticket so everyone entering the event is verified,” Yovich said.

While this will certainly be a controversial issue, the idea of a private company asking for your compliance to voluntarily participate in their event is not immoral, as you are not being forced to attend. That being said, however, many people — even those who will be lining up first to receive the vaccine — will likely refuse to have their private medical information handed between multiple parties just to see a concert.

What’s more, though the 90% efficacy rate touted by Pfizer is certainly welcome to many, the track record by those making this claim is less than stellar. Pfizer has paid out billions in health care fraud fines and in fact was party to the largest health care fraud settlement in US history.

Nevertheless, Americans have short memories and seemingly couldn’t care less about the criminal past of a company who is claiming 90% efficacy for a vaccine that was developed and tested in less time than any vaccine in the history of medicine.

Americans would do well to research the last time a vaccine was fast-tracked with limited testing. As the Journal of the Royal Society of Medicine wrote in its peer-reviewed paper titled The Cutter Incident: How America’s First Polio Vaccine Led to a Growing Vaccine Crisis:

“Getting safety issues wrong with a COVID-19 vaccine could set us back for years or even decades,” says vaccine expert Richard Malley, MD.

We should probably heed his advice.

**This article (Want to See a Concert? Ticketmaster Wants You To Prove That You’ve Been Vaccinated First) was originally published at The Free Thought Project and is re-posted here with permission.**