Urban Farmers Believe They Have Key To Solve Violent Crime 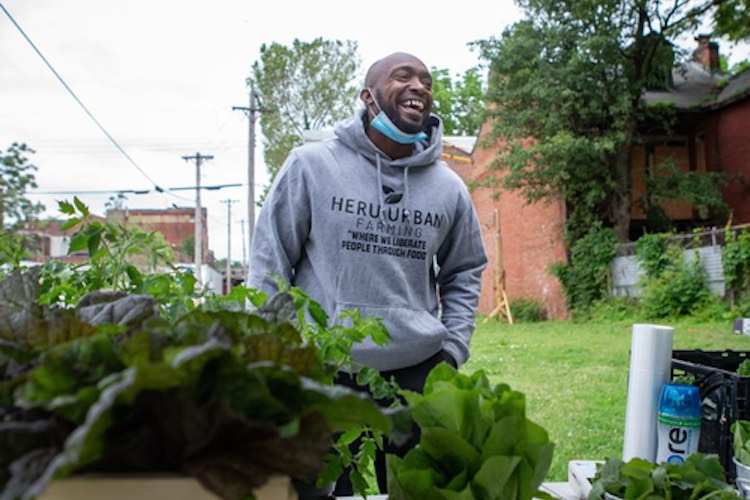 Lewis is also a health teacher who has seen it all. Some of his students have been locked up for petty crimes, while others have been jailed for shootings. He constantly hears gunshots around his home, and on average, his neighborhood records 3 to 4 homicides yearly.

“I mean, that’s normal to some people and unfortunately to me,” he said.

Researchers say a host of factors contribute to a city’s gun violence problem — what they define as deficits in social determinants of health such as income, housing, healthy living environments and quality education.

Lacking a complex nutritional diet can harm brain development in childhood, according to public health experts. That can cause later problems dealing with peers, handling authority and responding to situations of extreme stress.

The problems facing areas that experience gun violence are many, Lewis acknowledges, but he has also seen the impact that food can have.

“I’ve seen the difference in kids when they get a meal and when they don’t get a meal, how they behave and how they focus in school,” he said. “So I truly believe that’s all connected.”

Nearly 70% of the city’s 271 homicides last year occurred in low income census tracts without access to a grocery store or supermarket for at least half a mile, according to a Kansas City Star analysis of federal data and police reports.

Fifty-two of the killings occurred in just eight census tracts on the north side of the city with no grocery store for a mile.

St. Louis leads the state in gun violence and for most of the past decade ranked No. 1 for food insecurity — the lack of reliable access to healthy food. –STLPR

His mission is to rebuild communities from the bottom up and allow them to become “self-sustaining” with an abundance of healthy food.

People are now tilling and planting on vacant lots, backyards, and school gardens across the metro area as they find ways to rebuild their communities after Democrats and offshoring jobs to China have wrecked local economies over multiple decades.

St. Louis is not the only city with high rates of homicides where urban agriculture programs are springing up. Urban gardens have been spotted across Baltimore City with goals to increase food access, reduce vacant blight, and create new opportunities for education and employment.

Though small plots of land in urban areas might not feed an entire neighborhood – and perhaps public/private investments in indoor vertical farming should be made for these communities.