Totalitarian Psychosis In Our World – And Our Minds 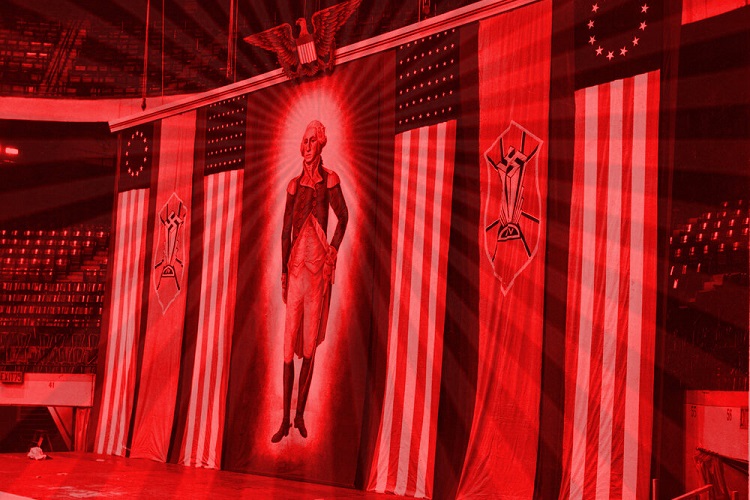 It should get our attention that every person or group of people that have discovered what the Native Americans call wetiko disease unanimously consider it to be the most important topic—it’s been called “the topic of topics”—to understand in our world today. Wetiko psychosis—which can be conceived of as being a mind-virus—is at the very root of every crisis we face – climate change (and our lack of response and confusion around the issue), the threat of nuclear war, social injustice, political malfeasance, the threat of fascism, financial corruption, endless war, etc. Called by many different names throughout history, the spirit of wetiko renders every other issue secondary, for wetiko is the over-arching umbrella that contains, subsumes, informs and underlies every form of self-and-other destruction that our species is acting out in our world on every scale. If we don’t come to terms with what wetiko is revealing to us, however, nothing else will matter, as there will be no more human species.

A form of psychic blindness, wetiko is a psycho-spiritual disease that works through the blind spots of the unconscious and the projective tendencies of the mind so as to hypnotize us via our mind’s own creative power to shape reality. This mind-virus only has power over us to the extent it is not seen, however, which is to say that the way to heal it is to see how it operates, both out in the world and within our own mind.

Not constrained by the conventional laws of third-dimensional space and time, wetiko is nonlocal. It is an inner disease of the soul that discloses itself through the canvas of the outside world. Wetiko has the magical ability to extend itself out into the world and seemingly configure outer events so as to express itself and give itself living material form. In other words, wetiko doesn’t just play itself out within our minds, but through influencing our unconscious and its reactions, manages to act itself out writ large—in full-bodied form—in the world. This is to say that what is happening in the world—just like a dream—is a reflection of a process happening deep within the psyche. Through this magical ability to express itself through the medium of the outside world, wetiko is simultaneously hiding and revealing itself at the same time, depending on our point of view and level of awareness.

We can better understand wetiko’s covert psy-ops by reflecting upon how this mind-virus works within an individual psyche, and recognize how this inner process is being mirrored and acted out in the world. When someone is taken over by the wetiko mind-virus, it is as if an alien, invading power gradually subsumes all of the healthy parts of the body politic and commandeers the executive function of the psyche so as to fulfill its own agenda, which is why the person taken over oftentimes acts in ways that are diametrically opposed to their own best interests.

In a psychic coup d’état, the wetiko bug can usurp and supplant a person, who becomes its puppet and marionette. Once the wetiko virus becomes sufficiently entrenched within a human psyche, the prime directive coordinating a person’s behavior comes from the disease, as it is now the one in the driver’s seat. As wetiko colonizes the psyche—centralizing power and control in the process—it eventually incorporates a seemingly autonomous regime that establishes a brutal hegemony over the healthy parts of the personality and becomes a parasitic autocracy within the greater body politic of the psyche. Once it gains a sufficient sovereignty, wetiko forms something like a totalitarian regime—what Jung calls “a shadow-government of the ego”—within the psyche which then dictates to the ego. This is why Jung, when referring to wetiko, calls it the “totalitarian psychosis.”

The internal landscape of the wetikoized psyche is mirrored in the external world through the totalitarian forces with its corresponding “shadow government” that comes along with it—with the ever-increasing centralization of power and control—that has infiltrated our democracy and is insidiously extending itself all over the globe. Both within our psyche—and in our alleged democracy—we are allowed our seeming freedom, but only so long as it doesn’t threaten the sovereignty and dominance of the archonic “ruling” power. An expression of its proclivity for wanting to usurp the executive function of any living system it inhabits, the word “archon” (the Gnostic term for wetiko) etymologically speaking, means “ruler.”

Unless we are lost in denial, it is clear that we are living at a time in which totalitarian forces (though in its less familiar form of “soft totalitarianism”) have re-emerged onto the political landscape. To quote Henry A. Wallace, Vice-President under Franklin Delano Roosevelt, “Fascism is a worldwide disease” (Notice the similarity to psychologist William James’ words, “Evil is a disease”). There is something about the disease metaphor that so precisely maps onto what is actually happening in our world that indicates that it is not mere metaphor. Mainstream media has even been using the term “The Authoritarianism Virus” to point to the trend towards totalitarianism that is happening both in the United States and around the world.

In a nation—and world—trending towards totalitarianism, it gets harder and harder to discern truth from fiction. The disease of totalitarianism can only flourish when the boundary between fact and fiction make people lose their ability to perceive reality. The collapse of the distinction between truth and lies greases the skids for a totalitarian occupation of consciousness. A totalitarian regime is not merely an external situation, but can only take place if it has a corresponding internal referent within the psyche. A totalitarian state depends upon, psychologically speaking, people being coerced into lying to themselves, which invariably results in becoming inauthentic, out of integrity with their very souls – and hence, disconnected from their true creative power.

Fascism’s “greatest threat to the United States,” to again quote Wallace, will manifest “within the United States itself.” In other words, the greatest threat to our democracy will not come from external forces, but from forces originating within our own body politic. This is a mirrored reflection of how the greatest threat from wetiko disease—the totalitarian psychosis that threatens us all—is not from outside, but arises within our own psyche. “The totalitarian psychosis,” Jung writes, is “forcing us to pay attention to the psyche and our abysmal unconsciousness of it.”

If we don’t realize that our current world crisis—with its trend towards totalitarianism—has its roots within and is an expression of a process going on deep within the human psyche (which is to say, within each one of us), we will be doomed to unknowingly offer ourselves into its sinister hands. As if having a recurring dream, our totalitarian nightmare will then endlessly amplify itself in more and more terrifying forms, until we receive the message it is freely offering us.

We need to recognize that the totalitarian forces emerging in our world are reflecting—and both literally and symbolically revealing—to us shadow components of our own psyche, while at the same time, in a nonlinear, acausal process that happens both atemporally (outside of time) and over (linear) time, are in-formed and influenced by the very inner psychological process they are reflecting. This is to realize that the inner and outer are simultaneously co-arising and reciprocally co-evoking each other.

Recognizing this correlation and instantaneous reflective quality between the seemingly disparate outer and inner worlds opens up a pathway within us which expands our consciousness and helps us to wake up to the dreamlike nature of reality. This realization unlocks previously unimaginable “creative” (in contrast to “destructive”) powers within us that we didn’t know we had. This is the very process that dispells wetiko’s hold over us, putting in our own hands the very creativity-generating tools we need to start to dismantle the totalitarian psychosis within our world. Our world depends on it.

This article (Totalitarian Psychosis in our World – and Our Minds) was originally published on awakeninthedream.com.