This Endangered Australian Bird Species Is Forgetting Its Song 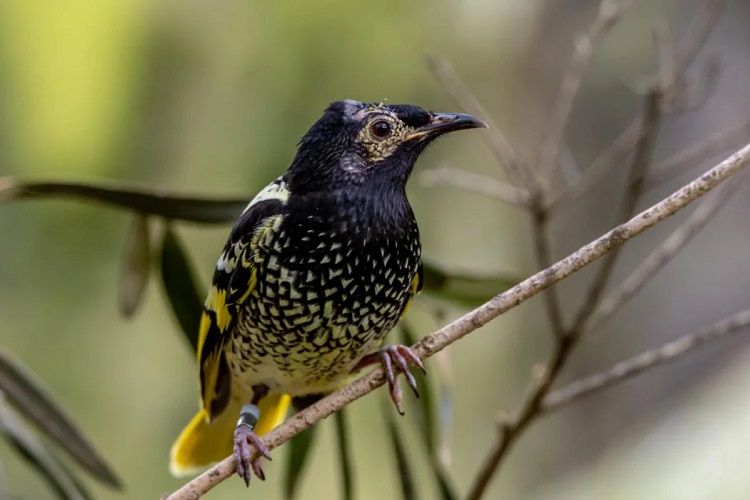 Can animals, like humans, lose their culture when separated from others like themselves? A new study provides rare evidence that they can.

The study began when a research team searching for a critically endangered Australian bird noticed something unusual: The birds they encountered weren’t singing the songs the researchers expected to hear.

“They didn’t sound anything like a regent honeyeater — they sounded like a different species,” Dr. Ross Crates, a member of the Difficult Bird Research Group at the Australian National University in Canberra, told BBC News.

Crates and his team realized that the birds were so endangered (there are only 300 left in the wild) that their limited contact with other regent honeyeaters prevented them from learning traditional calls.

“They don’t get the chance to hang around with other honeyeaters and learn what they’re supposed to sound like,” Crates told BBC News.

Crates and his team shared their findings in Proceedings of the Royal Society B on Wednesday. In the article, the scientists explained that animals, like humans, have cultures that only exist through interaction. When a population declines, so does the culture, and this in turn can lead to further population decline.

The researchers found that 27 percent of male regent honeyeaters were singing songs that differed from the regional norm. Twelve percent of the males did not even sing their own species’ songs, instead singing the songs of other species. This 12 percent lived in areas where regent honeyeaters are especially rare.

This loss of the birds’ “vocal culture” has important conservation implications: The birds that sang different songs were less likely to find mates and produce offspring.

The regent honeyeater’s plight is in part explained by their lifecycle. When the birds first hatch, adult males stay quiet to avoid drawing predators to their nests, The Guardian reported. So juvenile males have to learn their songs later in life from other adults. But the regent honeyeater, which is native to southeastern Australia, has lost around 90 percent of its habitat, BBC News reported. The bird’s population has rapidly declined in the last 24 years because of drought and land-clearing for agriculture, according to BirdLife International.

To help the birds survive, scientists are incorporating the findings from Wednesday’s study into their conservation efforts, The Guardian added. In the past, regent honeyeaters raised by the Taronga Conservation Society were taught their songs via recordings. Now, researchers are using wild-caught honeyeaters as singing coaches before young males are released into the wild.

“Could those birds have done better if they had sang better? Possibly,” Michael Shiels, who supervises the society’s bird department, told The Guardian.”The breeding program has been pretty successful but it can’t hurt to make sure we’re doing the right thing.”