The Truckers vs. The Government 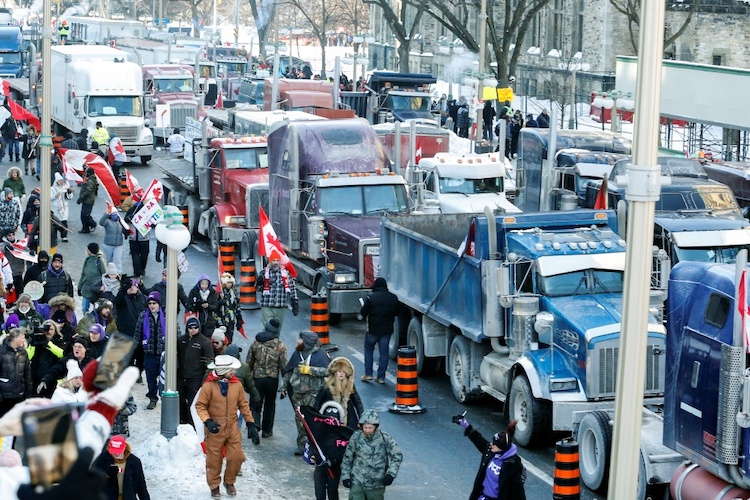 You can support the truckers at TruckerLawyer.ca.

As of this writing, I’m told the police are making arrests in Ottawa. I assume this means they’re arresting truckers.

The Ottawa city government has declared a state of emergency. It’s now a crime for anyone on the scene to give food, fuel, or aid of any kind to the truckers.

The truckers and people all over Canada want freedom and peace. The government wants peace without freedom.

The government wants vaccine mandates and passports, and the ability to declare lockdowns and other fascist measures at any time.

No debate on “the science,” no need to justify the COVID measures, no legal cases taking up Constitutional limits on government power. Just: OBEY.

We might feel shock at what the government is doing to the truckers, but we shouldn’t be surprised. No one should have expected the government of “obey us” to just sit back and let this convoy happen and proceed, with so many Canadians supporting it.

No one should be surprised that rebellion against “obey us” governments is breaking out across the world.

No one with a conscience should back away if governments and their media front men throw around words like “insurrection” and “incitement” and “terrorism.” THESE ARE CONTROL WORDS.

They’re meant to paralyze people. They’re crude smears. The implication would be, anyone who is “a trucker” or a “supporter” wants to overthrow the entire government—rather than replace the fascists.

“Overthrow” was the official characterization of the January 6 Capitol break-in, in the US. “Well, led by a guy wearing a helmet and horns, a mob was going to take over the Congress.”

I see. Sure. And Trump, wearing a military uniform, having gained control over the PENTAGON, was going to swagger into the Capitol, declare martial law, and run the US with his junta.

Thereafter, The Rebels, commanded by a cigar-smoking fatigues-wearing Tony Fauci, encamped in the Catskills, would valiantly try to win back The Republic and the Constitution.

The truckers want freedom and peace, and their own right to earn a living. The Canadian government wants peace without freedom for everyone, and they’re ready to use force to force the peace.

If serious violence breaks out in Ottawa, the government will be behind it.

Violence shouldn’t make people back away from supporting the truckers.

Perhaps you noticed that the George Floyd protests and riots and the looting and burning and violence in many US cities didn’t make anyone on the political Left back away from supporting the rioters.

Did the government call those supporters insurrectionists or terrorists?

You might hear this from people “who are really in the know”: “You see, the whole convoy was a PLAN to cause violence, and then anyone who’s against the mandates and supports the truckers would be labeled a terrorist…”

Without real evidence, that formulation could be used to reject ANY form of mass protest on ANY issue. You may as well say ALL OF LIFE IS A FALSE FLAG, and therefore, we should do nothing and support nothing.

If serious violence does break out in Ottawa, a typical shaming operation will launch: “You people who supported the truckers—you’re responsible for this. You thought the truckers were honorable. But they were always breaking the law. They were stirred up by a mob mentality, by you who won’t accept the reality of the pandemic and what we all have to do to return to normal life…”

Guilt by association, except it turns out the people we’re associated with—the truckers—did nothing wrong.

Again, if anyone has actual evidence to the contrary, evidence that shows there was a plan to launch a convoy that would dead-end in violence, and cause the world to shake its head and say, “THIS is what the protesters and the anti-vaxxers were about all along, they’re all crazy…”, then present that evidence.

I say this, because in the coming days, we could see and hear more of such talk.

What I see in this convoy is honor, justice, the struggle for freedom.

Remember: The convoy is a hell of a lot more than the truckers.

It’s all the Canadians who are supporting it. So if a trucker is there simply because he wants to make a living, but he can’t cross the border unless he shows a vaccine passport, and he doesn’t want to take the vaccine, and that’s the sum of his protest; fine.

And if some trucker turns out to be bad actor, so what?

GET OUT AHEAD OF ALL THIS.

Get all these things straight in your mind, because if the presence of many people and trucks in Ottawa endures, you’re going to be WORKED by some experienced PR pros; worked to change your thoughts and opinions and feelings.

That’s their job. That’s how they operate.

Violence is always a government’s hole card. They play it, and then they say the rebels caused it or made it necessary. They splash the violence on the news, because they know it scares many people, who then retreat.

Violence serves another purpose. People want it to stop, so they look to the current political leadership to stop it. They join forces with the fascists who started or triggered the violence.

Don’t fall for that.

If among all the truckers, there are a few bad actors who are government agents, and they do initiate violence, the news will highlight them to the max. This is pure Orwell 1984 stuff. Put pictures of the faces of “the killers” on the screen, over and over, with anchor voiceover telling the public what to see and think and feel. With the goal of stimulating outrage.

Outrage against everyone who supports the truckers or won’t take the vaccine or is opposed to the mandates.

Remember what this is. A fight for freedom.

Here’s something else that could happen. The government suddenly announces a new wave of COVID cases. And the blame is directed at the throngs of unmasked truckers and their supporters out in the streets. Super-spreaders. The news, of course, would play that up. By accusation and indirect suggestion, the public will be told THIS IS EXACTLY WHAT THE PUBLIC HEALTH OFFICIALS FEARED.

That’s a straight con. During the past two years, it’s been played many times.

Don’t be fooled. Case numbers can be rigged at the drop of a hat. That’s been going on since the beginning of the “pandemic.”

The pandemic story was planned with the sole purpose of canceling freedom.

Don’t allow yourself to be manipulated.

One more suggestion. Play out, in your mind, a worst-case scenario: The convoy WAS planned by bad actors with the intent to discredit actual freedom fighters and people who refuse the vaccine and oppose the COVID mandates and restrictions. Go ahead. Make a mind-movie of that.

Where does that lead you? What’s the bottom line?

Because all the people on the streets and in the trucks ARE for freedom; and if the outcome is planned government-caused violence, that means NOTHING about what we’re fighting for. That discredits NOTHING.

If we stay strong.

If we stand up.

If we make our voices heard.

I could write 10,000 more words about a parallel event to the convoy, but I’ll keep it short. The parallel event was the January 6 rally in Washington after the Presidential election, the rally that had nothing to do with the Capitol break-in. Where hundreds of thousands of people gathered.

There were a number of ideas in the minds of all those people: a stolen election; freedom from lockdowns and other fascist COVID restrictions; opposition to the vaccine; opposition to the self-appointed thought-police of America…

In my opinion, Trump didn’t deserve that massive show of loyalty. Not at all. I’ve explained why in other articles. But the people who were there—they were the important ones. Regardless of who planned the break-in and for what reasons. THEY, the hundreds of thousands, wanted freedom. And still do.

The US government is trying to figure out every possible way to discredit and cancel them. Now.

This is the bigger picture.

Keep your eye on it.

I know. I’m not supposed to bring up the January 6 rally. People who want freedom are supposed to forget that. Hush hush. Because THAT event has been slammed mercilessly and discredited and made into a foul horror show.

But I don’t care. All over the world, the same pattern has been repeating. The people who want to live out in the open and throw off their chains are being painted as criminals. For whatever reasons can be cooked up.

And no, not all protests are the same or are launched for exactly the same reasons. But at the core, the impulse and the foundation are there: WE’RE TAKING IT BACK. FREEDOM.

This isn’t Qanon crap or Trumpism or racism or craziness or any hustle.

The big smear, guilt by association, and all the other ops aren’t going to fool us.

If we don’t back down.

If we stand firm.

If we don’t quit.

If we make our voices heard.