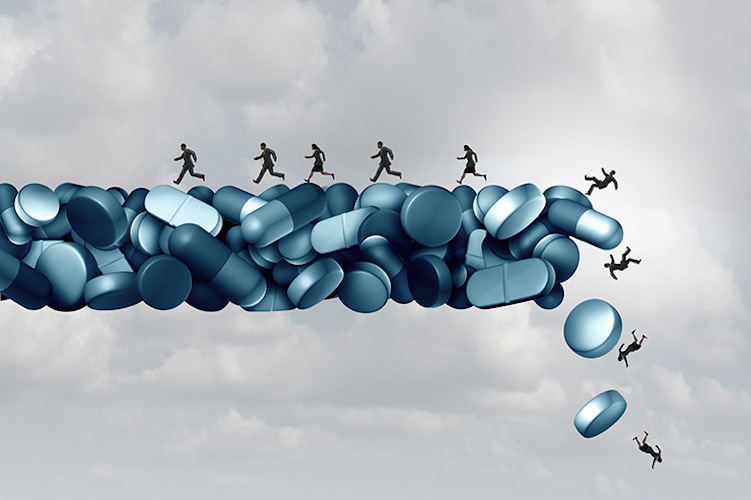 The pharmaceutical industry is worth $1 trillion, half of which comes from US-based sales. The alternative health industry, by comparison, is worth just $59bn. Big Pharma bribes doctors, dominates advertising, and drives the anti-natural health narrative.

It often is cheaper for Big Pharma to break the law and pay fines than follow regulations that hinder profits. Every year at least one major drug company is fined for one or more of the following: bribery, drug safety, false claims, fraud, foreign corruption, off-label and unproven promotion, price-fixing, and violating consumer protection. Since 2000 in the US alone Pfizer has been fined by federal authorities 47 times totalling $4.4bn; Merck 42 times for $3bn; J&J 28 times for $3.4bn; Abbott 25 times for $2.3bn; Novartis 22 times for $1.2bn; and GSK 13 times for $3.9bn.

Profits are boosted by what Elaine Hollingsworth calls “the sickness industry.” Despite living longer, obesity, depression, dementia, increased cancer and other morbidities mean that Westerners are now less healthy than just a few generations ago. Big Pharma pathologises minor ailments and makes people dependent on drugs instead of encouraging the use of natural alternatives. The crisis of the industry’s influence over the medical profession, from reporting trial results to influencing doctors, prompted the British Medical Journal (BMJ) to launch a “Commercial Influence in Health Initiative” to expose Big Pharma’s deadly influence.

Marketing fake medicine dates back at least to 19th century America when ‘patent medicine shows’ – which promoted products that were neither patented nor medicines – promised cures for fatigue, baldness, and scrofula. Million-dollar enterprises included Ayer’s Hair Vigor and Scovill’s Sarsaparilla. Dr Larry Dossey writes that in the 1900s, medical companies sought “to inflate a common, everyday condition to the level of pathology.” This was the beginning of what the science writer Julie Deardoff calls “fictionosis.”

To prove how easy it is to invent new illnesses, doctors Ray Moynihan and David Henry claimed to have discovered a new, potentially fatal, laziness disease: “motivational deficiency disorder.” Data was supposedly supplied by one Dr Leth Argos; a pun on lethargy. Their fake research was published in the BMJ.

In the 1960s, Dr Keith Connors was paid by the drug company CIBA to trial Ritalin. Connors set a precedent for trialling Big Pharma-sponsored drug studies on children via university-affiliated clinics. Connors watched this model get out of control to the point where he called misdiagnoses of Attention Deficit Hyperactivity Disorder (ADHD) “a national disaster.” Journalist Alan Schwarz revealed that although only 5 per cent of US children actually have ADHD, 15 per cent are diagnosed with it. This is largely due to Big Pharma pushing its products on doctors and families. Thirty per cent of all boys in the American South (i.e., the poor states) are misdiagnosed. Schwarz claims that Big Pharma paid “all the top researchers” to publish studies claiming that ADHD drugs are safe. Big Pharma then took the false data from their subsidised studies and constructed advertisements targeted at worried parents. The advert for Adderall XR, for instance, claimed that the drug boosts the child’s grades to match their intelligence. Schwarz says that “[e]very ADHD drug – Adderall XR, Concerta, Vyvanse, Metadate, you name it – has received a formal reprimand from the [US Food and Drug Administration] for false and misleading advertising.” Yet, many remain on the market.

Medical ghostwriters do not disclose their paymasters and are paid by companies to influence both policymakers and doctors. Elsie Langdon-Neuner estimates that over 10 per cent of journal publications are ghostwritten. Ghostwriting becomes apparent thanks only to whistleblowers and court orders. Researchers Healy and Cattell discovered 85 academic papers written by drug companies with the author’s name still to be determined. Fifty-five were written by Pfizer, and 30 were either funded by Pfizer or based on Pfizer’s data. Just two articles declared a conflict of interest, and every single one reported positive results. In 1999, Merck introduced the painkiller Vioxx. By 2004 it was withdrawn after being linked to cardiovascular disorders. Merck had previously hired ghostwriters despite having internal knowledge that the drug may increase the risk of thrombus formations.

The number of deaths caused by alternative medicines and therapies is so small that no generalised statistics have been compiled with the exception of cancer; namely, that complementary cancer therapy patients are reportedly five times more likely to die than allopathic cancer patients. Compare this to the UK alone, where prescription errors kill 20,000 patients a year. In the US, prescription errors kill a quarter of a million. The World Health Organization says that by 2012, 80 per cent of the world’s population was using alternative health therapies, including people in so-called developed countries. Around that time, 400 high-profile Australian doctors and scientists formed Friends of Science in Medicine, a lobby to remove alternative health degree courses from universities.

Today, Big Pharma spends $50 billion a year – almost the value of the entire alternative health industry – on advertising and PR. Ex-salesman and former leader of the Nordic Cochrane Centre, Dr Peter C. Gøtzsche, writes: “Drug companies don’t sell drugs, they sell lies about drugs.” He quotes The Lancet as saying that medical journals “devolved into information laundering operations for the pharmaceutical industry.” By 2010, 85 per cent of drug company-funded trials of new medicines yielded positive results for the top five products (e.g., antidepressants), compared to just half for government-funded studies. In Australia in 2017, Lisa Bero of Sydney University’s Charles Perkins Centre found that drug industry-sponsored trials of medicines and equipment were 30 per cent more likely to report favourable results. “Currently, we have no validated way to detect or evaluate these subtle but systematic biases.” Lobbying means that drug prices in Australia are double those of the UK and three times the cost of medicines in New Zealand. By 2017, Australians were paying $500m above the average for seven common drugs.

In the US, Big Pharma is the single largest lobbyist, spending over $200m in 2018 compared to electronics and manufacturing companies, and insurance, which spent over $100m each. In 2015, US Congressman Tom Price bought stock in Innate Immunotherapeutics. A year later, he purchased stock in Amgen, Biogen, Bristol-Myers Squibb, Eli Lilly, McKesson, and Pfizer. Price then went to Australia as part of a Congressional visit where he lobbied the government to drop its protectionist measures in the US-led Trans-Pacific Partnership deal. Innate Immunotherapeutics, which has a Sydney office, offered Price a discount on additional stock, making him a $150,000 profit. Price went on to become Donald Trump’s Health and Human Services Secretary.

Part of the Big Pharma PR strategy includes funding patient advocacy groups: AstraZeneca’s launch of Breast Cancer Awareness month to boost sales of its Tamoxifen; Pfizer’s association with the Alzheimer’s Association; and Hoechst-Russel’s promotion of the arterial drug Trental via its support for the National Council of Ageing. Additional blurring occurs in the promotion of drugs, including Viagra and Prozac, as lifestyle drugs in which the judgmental competence of the consumer is weighed against that of the qualified physician. As part of their marketing strategy, Australian drug companies engage in so-called asset exchanges with community organisers, patients, and GPs. They anonymously pay speakers to promote the wonders of drugs at conferences, take GPs out to dinner, infiltrate online patient chatrooms, and so on.

By the year 2001, 100 million women worldwide used hormone replacement therapy drugs (HRT), generating $3.8bn for several companies, particularly the US-based Wyeth which dominated the market. In the absence of scientific evidence, the producers of HRT drugs spent billions of dollars on PR groups like HRT Aware and RED Consultancy, promoting HRT as a “cure” for dementia, heart disease, menopause and its symptoms, mood, osteoporosis, sexual function, and vitality. HRT Aware featured women claiming to have improved their careers, overall health, sex lives, and general wellbeing – all thanks to HRT. HRT Aware turned out to be an industry group comprised of oestrogen producers, including Janssen-Cilag, Novo Nordisk, Organon, Solvay, and Wyeth. After the truth emerged in 2002 – that HRT drugs increase the risk of heart disease and double the risk of breast cancer – the drug-maker Novo Nordisk hired the German PR firm Haas & Health Partner to write letters to GPs downplaying the deadly results.

Consider also America’s opioid (painkiller) crisis. Around 170,000 Americans die annually in accidents: at home, car crashes, workplace injuries, etc. Included in that statistic is 70,000 deaths by drug overdose, meaning that drug overdose is the leading cause of death-by-accident in the US. Nearly seven in ten overdose victims did not die of heroin, crack-cocaine, or ecstasy but from opioids taken illicitly or on prescription. Each year, 18 million Americans misuse prescription drugs, including opioids, antidepressants, and stimulants. Every day, over 5,400 Americans misuse painkillers for the first time.

Opioids include carfentanil (an elephant tranquiliser), fentanyl (50 times stronger than morphine), oxycodone (50 per cent stronger than morphine), Tylenol (for head and body aches), and Vicodin (combining hydrocodone and paracetamol). Producers including Purdue Pharma – which “aggressively” marketed OxyContin (spending $200m in 2001 alone) – deliberately targeted doctors serving ethnic minority patients known to be at risk of addiction in de-industrialised areas like Kentucky and Ohio where disaffected communities succumb to “deaths of despair.” One of the big opioid dealers, Mallinckrodt (tax-haven in Ireland), went bust after paying $1.6bn in settlements over its opioid scandal. Between 2006 and 2012, Mallinckdroft flooded the US with 76 billion hydrocodone and oxycodone pills. Ohio-based distributor Steve Cochrane joked: “It’s like people are addicted to these things or something. Oh, wait, people are…” Accounts manager Victor Borelli responded: “Just like Doritos keep eating. We’ll make more.”

Each year, one in four adults in England alone (12 million people) are prescribed addictive drugs including antidepressants and opioids. At least one million people in England are potentially hooked on painkillers as are 1.4 million Australians. Each year, around 1,000 Australians die of opioid overdose: seven out of ten from pharmaceutical opioids. In 2018, 4.3 million Australians took 39 million prescribed drugs for mental health issues. Indicative of the ease with which physicians diagnose and prescribe, 86.3 per cent of prescriptions came from GPs compared to just over 12 per cent from mental health specialists. The overwhelming majority of prescriptions were antidepressants (over 70 per cent), compared to just 10 per cent for antipsychotics and 5.6 per cent for sedatives and hypnotics.

There’s plenty of action against Big Pharma. Countries from South Africa to Thailand are saying ‘no’ to international treaties that allow giants to monopolise patents and charge unaffordable prices. Big Pharma recognises the public appetite for natural products, hence its effort to corner the market. Accountability journalists like those at ProPublica expose GPs’ conflicts of interest via the “Dollars for Docs” project, such as the 2,500 physicians who received over $500,000 each between 2014 and 2018 from drug and medical device companies (700 of whom received $1m). The money came in the form of consultancy and lecture fees. The Alliance for Natural Health International documents efforts by the so-called Good Thinking Society, Quackwatch, and others, to delete the Wikipedia profiles of natural and alternative health advocates and/or insert potentially libellous material into their bios. Victims include doctors Malcolm Kendrick, Aseem Malhotra, Joseph Mercola, and Nina Teicholz.

Growing numbers of people are eating more healthily and looking for non-allopathic treatments. The Hartman Group notes that “[p]rogressive consumers are a window in to the future of health and wellness.” The year 2019 saw the biggest growth in herbal dietary supplements in the US in over two decades, totalling $8.8bn. Adaptogens, Ayurvedic, cannabinoid oils, goji berries, and natural cough drops and lozenges are among the bestsellers.

Although most GPs are good people who do great work, it is important to also see them as potential proxies for a huge, unethical industry, and learn to distinguish the necessary drugs from the unnecessary ones.

Dr T.J. Coles is an associate researcher at the Organisation for Propaganda Studies, a columnist with Axis of Logic, a contributor to numerous publications (including CounterPunch and Truthout) and the author of several books including Manufacturing Terrorism (Clairview Books), Human Wrongs (iff Books) and Privatized Planet (New Internationalist).

This article was published in New Dawn Special Issue Vol 14 No 2.