The Only Good President Is No President 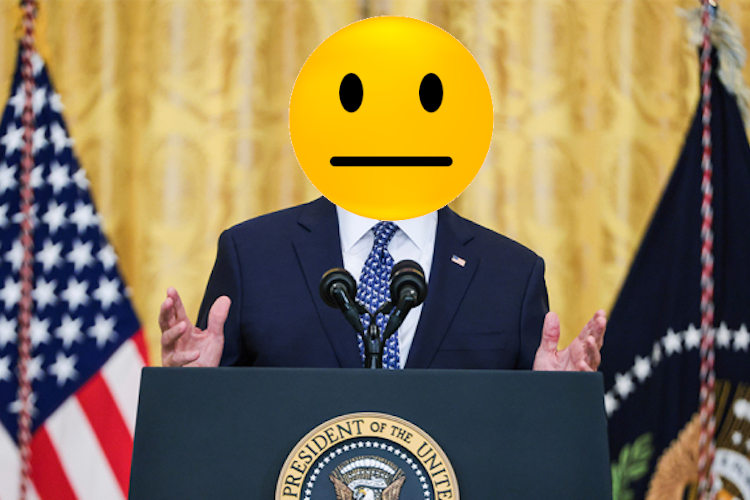 “It is a well-known fact that those people who must want to rule people are, ipso facto, those least suited to do it. Anyone who is capable of getting themselves made president should on no account be allowed to do the job.” ~Douglas Adams

Clowns to the left of us, jokers to the right, and the entire nation is stuck in the middle. The problem is that they are clowns who don’t even realize they are clowns. They are jokers who don’t see the joke is on us all.

The outdated institution of the presidency is mere puppetry at best and a slippery slope toward tyranny at worst. It has become overtly symbolic and distractingly sycophantic. Working on dead patterns, it constantly gives birth to the two-faced bipartisan monstrosity of republican-democrat fuckery.

This is mostly due to a flawed voting system and a politically lazy citizenry. Voting in doesn’t work but voting out does. Lottery in; vote out—that’s the golden ticket for appointing leadership. But we’re putting the cart before the horse. First, we need to get the horse in front of the cart, and that’s getting rid of the presidency and replacing it with a presidential assembly. Then, we can begin instituting a new system of appointing leadership.

The reasons are inexhaustible, but here are seven major reasons why we do not need a president:

2.) It aggrandizes the outdated, misguided, and corrupt power of the state.

3.) It leads to an apathetic citizenry.

5.) The voting system is fundamentally flawed.

But these are not the worst offense to democracy. The worst offense is that the presidency itself is nothing more than a red herring. This alone is reason enough to scrap the entire thing.

The presidency is a red herring:

What is a red herring? It’s a diversion intended to distract attention from the real issue. It’s an abstract issue having only surface relevance to the original issue.

Governing this precept, it stands to reason that the concept of the presidency—like the parochial and uncouth establishment of kings and queens that came before it—is itself a red herring. It has become a smokescreen, a false sincerity, a diversionary device.

As it stands, the presidency distracts us from the real issues. Presidential campaigns are all pageantry and no payoff. They are dangerous debacles to the right and laughable identity politics to the left. They exhaust themselves in howls. The issues that concern us all are tossed around like smoke and mirrors while the clowns and jokers strut across the stage making a mockery of liberty.

And we’re all tuned in. We’re all on the edge of our seat, hoodwinked, conned, bamboozled. In a cruel twist of irony these red herrings flip the tables on us—we become the fish. Hook line and sinker, we fall for their tricks. Money gets tossed in to muddy the waters. This happens again and again. And we’re all caught in the downward spiral of plutocracy disguised as democracy.

We fall for the partisan trap, year in and year out. Our political indoctrination blinds us to the big picture. All we see is the red clown and the blue joker. All we feel is us versus them. All we think is we’re right and they’re wrong. All we know is that we don’t know that we don’t know what’s happening. Our willful ignorance becomes our cognitive dissonance and before we know it all our reasoning gives way to delusion. The specter rules the spectator.

The best way to do this is to think outside the box. The current “box” has us conditioned to believe that we need a president. Thinking outside this box asks the radical question: do we really even need a president?

“Society has become carnivorous and pathological in precise proportion to the degree that the individuals who make up that society become deceitful and irresponsible.” ~Jordan Peterson

To piggyback on Jordan Peterson’s quote, it’s also to the degree that the individual is deceived and conditioned into being irresponsible by a failed system.

We are so distracted by the red herring (whoever it may be), that we deceive ourselves into giving up our responsibility to their abstract and wishy-washy “leadership.” Under the shadow of our partisan specter, we lose sight of our personal responsibility to liberty. It’s all too easy to just give into the easy but flawed way of appointing leaders: voting.

To elect means “to choose or make a decision.” The problem is our choices are limited due to the bi-partisan monopoly on power, and our decision seems to be between a “greater or lesser evil.” This is perpetuated by state manipulation, cultural conditioning, and entrenched political propaganda with corrupt lobbying that creates divisiveness.

Indeed. We can “elect” to not elect a president at all, because we don’t need a scapegoat-puppet who is hamstrung by lobbyists, corporations, and bankers for a “leader.” We don’t need a plutocrat propped up by money and monopoly. We just need authentic leaders and prestigious elders—plural; chosen randomly from a competitive assembly of other authentic leaders and prestigious elders. That will get the job done just fine, while also preventing scapegoating and the rise of psychopaths.

Replace the presidency with a presidential assembly:

“There is nothing more difficult to execute than to introduce a new order of things; for he who introduces it has all those who profit from the old system as his enemies.” ~Machiavelli

This article is ahead of its time. It’s in the future. It’s ahead of the curve. But the fact that people aren’t ready for it, or that the system is simply too set in its ways to change, does not change the fact that bottom-up assemblies function better than top-down hierarchies. Sub-hierarchies within bottom-up assemblies may work because there are more checks and balances in place. But top-down hierarchy in and of themselves tend to not work because even the most well-meaning person can become corrupt by power.

A presidential assembly, made up of three or five individuals, will be more likely to check and balance each other’s power and it will dissolve the symbolism of the “crowned” figurehead, replacing it with a balanced team. The rare occurrence of the need for a split-second decision can be regulated to the presidential speaker (similar to the Speaker of the House in the House of Representatives), which can be randomly decided by lot each new day, week, or month.

Some might argue that the House and the Senate are already a fair enough checks and balancing system on presidential power, but this still doesn’t solve the red herring problem that hijacks our reasoning. Nor does it solve the partisan bias problem. Neither does it solve the electoral problem.

Only a presidential assembly randomly created through a lottery of existing leaders can solve both the electoral corruption problem and the red herring problem that we all face in our country’s leadership.

To begin with—since we are living in the time of partisan delusion and one-right-way thinking— we’ll need to make sure the assembly is well balanced. Perhaps a three-to-two republican-to-democrat ratio, and vice versa, to begin with. Or a republican, democrat, green party member, libertarian, anarchist dynamic that covers more of the existing parties. This can flip itself every four years. And We the People can still have voting powers throughout the assemblies “reign.” Not by voting in. No. By voting out! Impeachment over aggrandizement. We default to aggressive checks-and-balances by democracy and liberty rather than the passive prop-and-stay of plutocracy and monopoly.