The Growing Rebellion Against COVID Policies 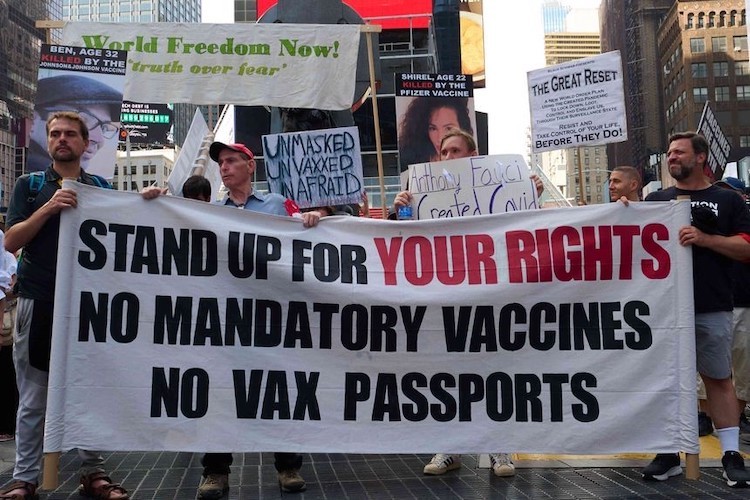 As an increasing number of mandates go into effect, we are beginning to see the resistance to these policies growing in equal measure. Here are some of the latest examples.

Southwest Cancels THOUSANDS Of Flights As Pilots Walk Out, Media Claim It’s Not About Vax Mandates

“In what appears to be one of the first cases of a union pushing back against the new COVID vaccination requirements handed down by the Biden Administration, a union representing pilots at Southwest Airlines is suing to stop the vaccine requirement from being forced until a lawsuit is resolved Bloomberg reports that the union representing Southwest’s pilots has asked a court to grant a temporary stay against the federal vaccination rules until an ongoing lawsuit over what they allege are violations of US labor laws is resolved.”

“As we noted on Sunday, Southwest airlines canceled nearly 2,000 flights over the weekend – blaming the Federal Aviation Administration (FAA) and inclement weather. Oddly, no other major airlines had the same issues, while rumors swirled that airline employees had staged coordinated walk-outs (which their unions deny).”

This pilot’s call to action for all of us is really inspiring!

This is the single bravest thing I have seen in years. God bless these Pilots. The heroes we need right now 🇺🇸✈️ pic.twitter.com/ZxuRseDoAq

“On Monday, Southwest was once again at the top of the cancellation list, according to FlightAware – which lists 356 cancellations as of this writing (23% of the day’s 1,539 total cancellations), prompting Sen. Ron Johnson (R-WI) to tweet: ‘As a loyal Southwest customer who has been flying safely throughout the pandemic and is utterly opposed to vaccine mandates, I’m asking, stop the madness before more damage is done.’

Former US Senator Dr. Ron Paul may be on to something in a Monday op-ed via the Ron Paul Institute, when he calls it a rebellion (emphasis ours). The incredible cruelty and folly of forced vaccines finally came home to roost. The vaccine mandate backlash has been bubbling just under the surface, but now it has spilled out into the open, threatening to completely derail an already crumbling economy and to obliterate a deeply unpopular US President and Administration.”

“The incredible cruelty and folly of forced vaccines finally came home to roost. The vaccine mandate backlash has been bubbling just under the surface, but now it has spilled out into the open, threatening to completely derail an already crumbling economy and to obliterate a deeply unpopular US President and Administration.

Seemingly out of nowhere what appears to be a Southwest Airlines rebellion has taken flight this weekend. According to media reports, scores of pilots and other Southwest employees have coordinated the taking of “sick days” to use them up in advance of a Southwest Airlines mandate to get the jab or lose the job. Over Saturday and Sunday more than 2,000 flights have been cancelled, with airports experiencing full-on mayhem.

The Southwest Airlines Pilots Association is suing the airline over the imposed vaccine mandate, bolstering the claim that there is a “sick out” underway among angry Southwest pilots.

The mainstream media is doing its best to keep a lid on the expanding rebellion against the vaccine mandates, and Southwest Airlines itself is blaming the cancellations on bad weather and a lack of air traffic controllers. However, the weather problems that Southwest claims to be experiencing seem unique to that carrier: no other airline (thus far) is reporting such weather-related cancellations. And FAA spokesperson Steve Kulm told USA Today that “No FAA air traffic staffing shortages have been reported since Friday.”

Will other pilots, such as at American Airlines, follow suit? Rumors are circling that this is only the beginning.”

Once Celebrated Healthcare Workers Under Fire

In A Dramatic Turn, The Once-Heralded Nurses And Healthcare Workers Are Being Fired For Not Getting Their Vaccination Shots reports:

“Around 16% of the New York state’s hospital workers, representing about 83,000 people, aren’t completely vaccinated. Roughly under 10% have not received a single shot.”

“States including New York, California, Rhode Island and Connecticut also set vaccine mandates for health care workers that take effect this week. But there are brewing concerns over staff shortages at already-overburdened hospitals still grappling with COVID-19 cases. Some hospital networks said they’ve ramped up hiring ahead of vaccine deadlines to stabilize their workforces. ABC News contributor John Brownstein, an epidemiologist and professor at Harvard Medical School, noted that while overall the number of health care workers being terminated or suspended isn’t huge, at the same time, ‘we can’t afford to lose anybody at this point.’”

These Health Care Workers Would Rather Get Fired Than Get Vaccinated

“Monday is the vaccination deadline for New York State health care workers. Thousands of refusers have failed to meet it….They see their work as a badge of credibility, and the order from their bosses and the state to make a choice — get vaccinated or get fired — as a betrayal. ‘We were all traumatized, vaccinated and unvaccinated,’ said Ms. Conrad, who works at United Memorial, a hospital in Batavia, a small city midway between Rochester and Buffalo, and felt respected by colleagues there. ‘It’s very hard that the same people who elevated me to this level now look at me as a dangerous person.’…

The disagreement is also testing government’s power to mandate compliance with public-health measures; New York’s mandate and the state’s refusal to allow religious exemptions are the subject of at least two lawsuits, including one by Ms. Conrad and five other plaintiffs.” 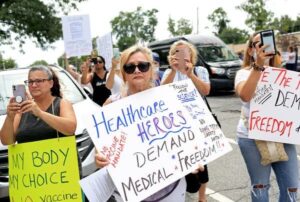 “A federal judge in Utica sided Tuesday with 17 health care workers who object to New York State’s vaccine mandate for health workers on religious grounds, granting their request for an injunction that stops the state from enforcing the policy for those who claim a religion-based objection. ‘There is no adequate explanation from defendants about why the ‘reasonable accommodation’ that must be extended to a medically exempt health care worker under 2.61 could not similarly be extended to a healthcare worker with a sincere religious objection,’ Judge David Hurd wrote.

Hurd’s preliminary injunction means New York will continue to be barred from enforcing any requirement that employers deny religious exemptions. Unlike other judges who have heard similar cases about vaccine mandates, Judge Hurd concluded ‘the public interest lies with enforcing the guarantees enshrined in the Constitution and federal anti-discrimination law’ and not the wider public health.

He wrote that the health care workers challenging suing the state were likely to succeed on the merits of their constitutional claim. ‘The question presented by this case is not whether plaintiffs and other individuals are entitled to a religious exemption from the state’s workplace vaccination requirement,’ he wrote. ‘Instead, the question is whether the state’s summary imposition of 2.61 conflicts with plaintiffs’ and other individuals’ federally protected right to seek a religious accommodation from their individual employers. The answer to this question is clearly yes. Plaintiffs have established that 2.61 conflicts with longstanding federal protections for religious beliefs and that they and others will suffer irreparable harm in the absence of injunctive relief.’

The plaintiffs said they hold the sincere religious belief that they ‘cannot consent to be inoculated…with vaccines that were tested, developed or produced with fetal cell lines derived from procured abortions.’

According to the plaintiffs, the COVID-19 vaccines that are currently available violate these sincere religious beliefs ‘because they all employ fetal cell lines derived from procured abortion in testing, development or production.’

Gov. Kathy Hochul’s administration began requiring workers at hospitals and nursing homes to be vaccinated on Sept. 27 and more recently expanded the requirement to include workers at assisted living homes, hospice care, treatment centers and home health aides. ‘My responsibility as Governor is to protect the people of this state, and requiring health care workers to get vaccinated accomplishes that,’ Hochul said in a statement. ‘I stand behind this mandate, and I will fight this decision in court to keep New Yorkers safe.’”

Texas Gov. Greg Abbott bans any COVID-19 vaccine mandates — including for private employers
“Abbott also called on the Legislature to pass a law expanding the ban on vaccine mandates.
OCT. 11, 2021 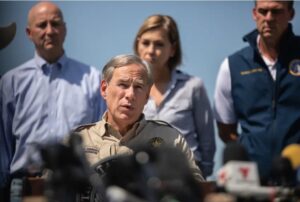 Texas Gov. Greg Abbott on Monday issued another executive order cracking down on COVID-19 vaccine mandates — this time banning any entity in Texas, including private businesses, from requiring vaccinations for employees or customers.

Abbott also called on the Legislature to pass a law with the same effect, promising to rescind the executive order once that happened. The Legislature is in this year’s third special legislative session, which ends Oct. 19. ‘The COVID-19 vaccine is safe, effective, & our best defense against the virus, but should always remain voluntary & never forced,’ he said in a tweet announcing his latest order….

The latest move appears to be at least partly motivated by President Joe Biden’s actions in September that require all employers with more than 100 workers to mandate vaccines for workers or test weekly for the virus. ‘In yet another instance of federal government overreach, the Biden Administration is now bullying many private entities into imposing COVID-19 vaccine mandates, causing workforce disruptions that threaten Texas’s continued recovery from the COVID-19 disaster,’ Abbott said in his order.”

“Job boards for sharing open roles at companies that do not require employees to be vaccinated against COVID-19 have been popping up online as vaccine mandates are becoming more common.

One board is hosted on Gab, the social media platform that has been embraced by some conservatives and members of the far-right. In an email sent to users on Wednesday, Gab CEO Andrew Torba announced the ‘No Vax Mandate Job Board.’

‘This job board is for sharing job openings that do not require employees to inject themselves with an experimental substance or violate their bodily autonomy and religious beliefs in order to retain employment,’ he wrote, adding that job seekers are welcome to post their resumes in the group.

The group, which had nearly 30,000 members after just two days, was filled with messages from people looking for work that won’t require them to be vaccinated….

Another site marketing itself to job seekers who are looking to avoid vaccine mandates, NoVaxMandate.org, says it believes ‘no right is more sacred than the right of every individual to the control of their own person, free from all restraint or interference of others.’

The openings listed on the site range from a Pizza Hut delivery driver in Texas to a Hairstylist at a ‘patriot run small business’ in Arizona. There are multiple openings for nurses at rural nursing homes in Wisconsin and Minnesota, with listings that read: ‘No Jab required. We are awake and serve God.’

A third site, RedBalloon, touts itself as ‘the nation’s first and only free speech job site.’ It said it would be ‘taking a stand against forced vaccinations,’ announcing in a blog post it would be ‘ramping up’ its operations to connect employers who are looking for employees ‘regardless of their vaccination status.’

We connect employers who value freedom with employees who value it too. We envision a world beyond cancel culture, where employees are free to work… without fear that they will find themselves on the wrong side of their employer’s politics.

That’s it. No agendas, politics, or drama. Just work. Interested? Let’s create that world together.

Questions? Comments? We’d love to hear from you!

Also see from Del Bigtree at The HighWire: