The Bohemian Club and the New Manhattan Project 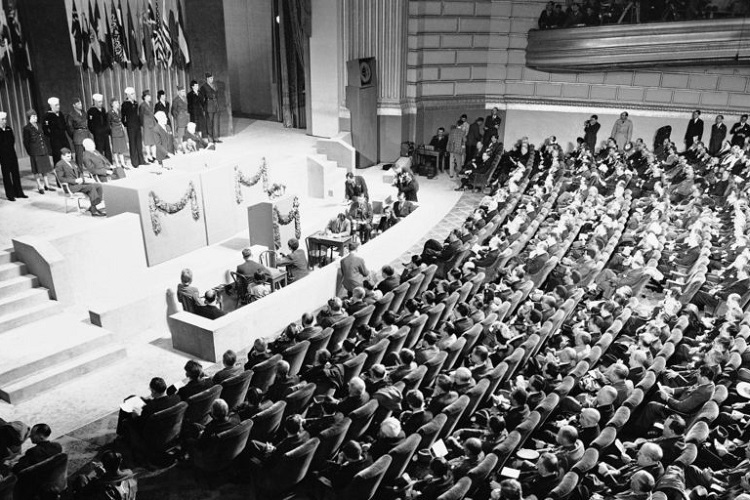 It’s that time of year again! As the summer solstice approaches, the members of San Francisco’s exclusive Bohemian Club get ready for their big, annual get-together along the banks of the Russian River in Sonoma County, CA. Their annual retreat is held at their Bohemian Grove – also known simply as ‘The Grove.’ What exactly it is that they do up there remains largely a matter of hearsay and speculation. We do know that some of the most powerful people in the world attend and that senior Grovers dress up like Ku Klux Klansmen to burn the effigy of a child in front of a huge stone owl. That much is well documented.

The Bohemian Club is an exclusive, all-male club based in San Francisco, CA. Their headquarters are a big, old brick building on the corner of Post and Taylor Streets in the Union Square/Nob Hill area. Every year around the June summer solstice, Bohemian Club members visit their Bohemian Grove for a couple weeks of festivities centered around a torch-lit, occult ritual known as the Cremation of Care which involves the mock-sacrifice of a child in front of a giant stone owl performed by men in hooded robes.

The Bohemian Club is firmly hooked into the old boy network. In fact, it is the author’s humble opinion that, short of the Vatican, the Bohemian Club is the most powerful organization in the Western world; not because of the power that the organization itself wields, but rather because of the power of the ideas and collaborations that are generated there – particularly the ideas and collaborations that arise from their most important annual meeting held at their Bohemian Grove.

In the early 1900s, Sweden’s most famous scientist Svante Arrhenius (1859-1927) visited the Bohemian Club headquarters as well as the Grove. He was invited there by a UC Berkeley botanist named Winthrop Osterhout (1871-1964). This is important because it was Arrhenius who first formulated the theory of man-made global warming, which has been used as a reason to propel the New Manhattan Project throughout the decades.

In 1943, towards the end of World War II, the original plans for today’s United Nations were drawn up by a secret Council on Foreign Relations steering committee funded by the Rockefellers. These plans were eventually finalized at a big conference in San Francisco known as the United Nations Conference of International Organization (UNCIO). UNCIO was held from April 25 to June 26 of 1945. Receptions for UNCIO delegates and other dignitaries were held at the Bohemian Club’s S.F. clubhouse. This is significant because both the United Nations and the Rockefellers are heavily implicated in the New Manhattan Project.

Other people with significant connections to the New Manhattan Project have been involved with the Bohemian Club and Grove as well. Vannevar Bush (1890-1974) writes that he listened to a speech by Herbert Hoover at Bohemian Grove. Wernher von Braun (1912-1977) was a periodic attendee of the annual summer events at the Grove. Lee A. DuBridge (1946-1969) and John McCone (1902-1991), were Bohemian Club members.

There is a certain organization in particular that has a multitude of connections to the New Manhattan Project as well as to the Bohemian Club. That organization is Stanford Research International (SRI). Let’s take a good, long look at them. The deep connections between SRI and the Bohemian Club are detailed in Mike Hanson’s 2012 book Bohemian Grove: Cult of Conspiracy. Hanson was one of the two people to ever successfully infiltrate the Bohemian Grove, videotape their sacred Cremation of Care, and exfiltrate. Hanson writes:

An earlier example of a national research/policy institute formed through connections within the Bohemian Club was the Stanford Research Institute (S.R.I.). S.R.I. was originally organized at the Bohemian Grove in 1945 at a meeting in the Semper Virens Camp. Three Bohemians had discussed the idea for S.R.I. for several years: Robert Swain [1875-1961], Philip Leighton [1897-1983], and Dudley Swim, who had frequently used the Grove as a place for conversation on the idea. S.R.I. is literally a sub-camp of the Bohemian Club with eleven Club members serving on S.R.I.’s Board for the past quarter century.”

The former Stanford Research Institute, Stanford Research International has been deeply involved in weather modification and the atmospheric sciences for a long time. Specifically, they have been very active in the areas of satellites and ionospheric heaters which both play a crucial role in the New Manhattan Project.

Early on, a famous SRI scientist distinguished himself as particularly notable to our investigation. Oswald Villard, Jr. (1916-2004), also known as ‘The Father of Over-the-Horizon Radar,’ directed Stanford’s RadioScience Laboratory from 1958 to 1972. The RadioScience Lab was the predecessor to today’s Stanford Space, Telecommunications and Radioscience Laboratory or ‘STARLab’ where they continue ionospheric research with VLF (very low-frequency) waves. Villard’s work on over-the-horizon radar started at Stanford. When it became clear that his work had potential defense applications, it was transferred to the nearby Stanford Research Institute. Over-the-horizon (OTH) radar is significant to our investigation because it was the predecessor to today’s ionospheric heaters which generate powerful electromagnetic signals to modify the weather. Ionospheric heaters can also produce signals that have a tremendous impact upon our moods, thoughts, and bodily functions. Villard was a member of the Air Force Scientific Advisory Board from 1961 to 1975. He was also a member of the Naval Research Advisory Committee (1967-1975) which he chaired from 1973 to 1975.

By 1974 the powerful ionospheric heater at Arecibo, Puerto Rico was operational. SRI has contributed to its operations since the beginning. In 2011 Stanford Research Institute International and their Center for GeoSpace Studies were selected by the National Science Foundation to run the Arecibo ionospheric heater.

SRI has also been deeply involved with the High-frequency Active Auroral Research Project (HAARP) in Alaska.

In the early 1970s, the Jason group moved their operations to the headquarters of SRI in Menlo Park, CA. SRI has contracted with Jason extensively and the Jason group is heavily implicated in the New Manhattan Project

It is also of note to our discussion that SRI has been active in the area of atmospheric tracers. A 1983 paper by Warren Johnson of SRI International goes over the state of the art in atmospheric tracer techniques. Johnson writes of particulate tracers, tracer smokes, and oil fogs (among other materials) being used for atmospheric tracer experiments. Johnson also writes of an ideal tracer having a small, finite, and predictable radioactive decay rate to be measured with lidar (laser radar) remote sensing as it floats through the air. Tracking the movements of airborne particles allows for the tracking of large air masses which is an activity central to the New Manhattan Project’s command and control operations.

In 2003 SRI was awarded a grant from the National Science Foundation worth tens of millions of dollars to study the upper atmosphere by leading the development of a mobile radar facility called the Advanced Modular Incoherent Scatter Radar (AMISR). Part of the AMISR was installed at the aforementioned Poker Flat, Alaska. This project originated from SRI’s Center for GeoSpace Studies. Study of the upper atmosphere is directly relevant to the New Manhattan Project.

In 2010, in cooperation with the Department of Defense, Stanford Research Institute International launched their Radio Aurora Explorer CubeSat satellite in order to monitor the upper atmosphere. This was part of a program funded by the National Science Foundation and involved the use of ionospheric heaters in Alaska, Puerto Rico (Arecibo), and Norway.

Peter A. Kirby is a San Rafael, CA author and activist. Check out the newly updated and expanded edition of his ebook Chemtrails Exposed. It’s still only 99¢, but not for long.

Arrhenius: From Ionic Theory to the Greenhouse Effect a book by Elisabeth Crawford, published by Science History Publications, 1996

Pieces of the Action: The Personal Record of Sixty Event-filled Years by the Distinguished Scientist Who Took an Active and Decisive Part in Shaping Them a book by Vannevar Bush, published by William Morrow and Company, 1970

Bohemian Grove and Other Retreats: A Study in Ruling-Class Cohesiveness a book by G. William Domhoff, published by Harper and Row, 1974

PeterAKirby.com
My Minds page
My Steemit page
My GoodReads page
My YouTube channel
My BitChute channel