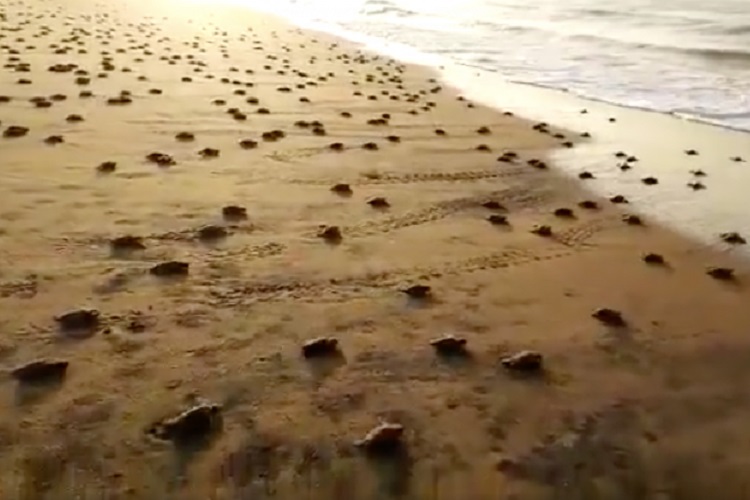 Stunning video from India has emerged that shows the “magical” moment when massive amounts of rare baby sea turtles crawled out to sea for the very first time after about 20 million eggs hatched.

In a spectacular clip showing the event, masses of olive ridley sea turtles hatchlings can be seen making their way across a deserted beach along the coast of the eastern state of Odisha.

The video was shared to Twitter by an Indian Forest Officer, Susanta Nanda, who wrote:

“A sight that casts magical spell year after year. Nearly 2 crore plus [20 million] olive ridley hatchlings have emerged & made their way to sea from half of about 4 lakh [400,000] nesting at Nasi-2 islands, Gahirmatha rookery Odisha. The spectacle continues. Early morning video.”

A sight that casts magical spell year after year👍

Nearly 2 crore plus olive Ridley hatchlings have emerged & made their way to sea from half of about 4 lakh nesting at Nasi-2 islands, Gahirmatha rookery Odisha.

Despite being the most abundant of all sea turtles, the global Olive Ridley population remains vulnerable worldwide. This is mainly due to the fact that they are only able to nest in a very small number of locations. As a result, any disturbance to even a single beach where they nest – be it through direct human intervention, the presence of non-native species, or global events such as rising sea levels – could have massive repercussions for the entire species, according to the World Wildlife Fund. The conservationist group wrote:

“Sea turtles are the living representatives of a group of reptiles that has existed on Earth and travelled our seas for the last 100 million years. They are a fundamental link in marine ecosystems and help maintain the health of coral reefs and sea grass beds.”

“The last time we saw day time nesting of olive ridleys along this site was in 2013.

“Usually, they come on to the beach for nesting only during the night. This March was special for us as we saw the species visiting the site at night and even during the day, in equally good numbers.”

At the time, local authorities estimated that about 60 million eggs would be laid this year in total.

Typically, the mass nesting attracted hordes of visitors eager to watch the miraculous event, with thronging crowds often jostling with forest officers who struggled to keep them at bay. However, the coronavirus lockdown has prevented any such disturbance of this year’s mass nesting, reported the Hindu, allowing the 25 forest guards and researchers to focus on guarding the turtles.

Yet in the absence of humans, crows and jackals also swoop in to attack the turtles.

S.N. Patro, the president of Orissa Environment Society, disputes whether the lockdown had any impact on the nesting activities of the Olive Ridley sea turtles. Patro said:

“What the lockdown can do is that it can reduce the casualties of the sea turtles or the damages their eggs undergo in normal days. However, in the absence of human movements, pest attacks and attacks from other animals can increase as well.”

“They [turtles] are quite confident. The village communities in Rushikulya have known of arribadas [the Spanish word for ‘arrival’ that refers to the mass nesting events] of olive ridley turtles since time immemorial.”

Regrettably, hundreds of baby turtles in Odisha perished during their first crawl out to sea after they were caught in fishing nets strewn along the coastline, reports Times of India.

Meanwhile, about 1,000 miles away on the southwestern coast of India in the state of Goa, thousands of other Olive Ridley hatchlings could be seen emerging from their nests in video shared last week by local Chief Minister Pramod Sawant.

“Amazing wonders of nature! Olive Ridley turtle hatchlings emerging out from the last nest at Morjim. Along with Morjim, Mandrem, Agonda, and Galgibagh are important beaches in Goa which attracts turtle for nesting.”

Amazing wonders of nature! Olive Ridley turtle hatchlings emerging out from the last nest at Morjim. Along with Morjim, Mandrem, Agonda and Galgibagh are important beaches in Goa which attracts turtle for nesting. pic.twitter.com/UjuoIC9hP4