Strongest Solar Flare in Years Coincides with Riots, Reminding Us that Solar Activity and Unrest are Historically Linked 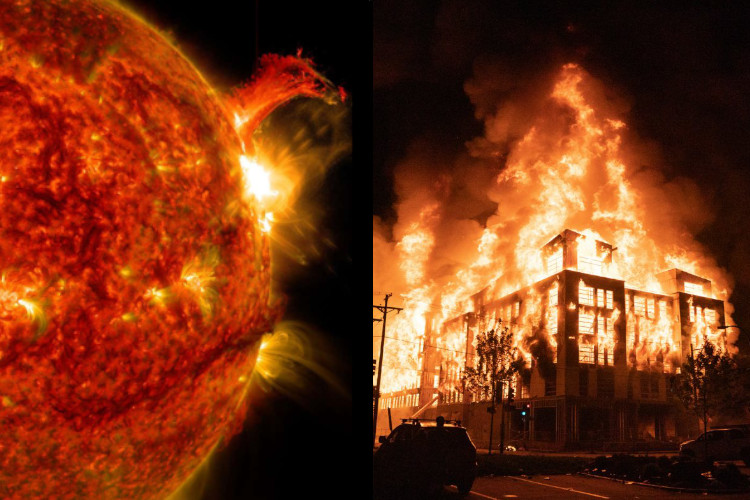 Major civil unrest, protesting and rioting began to foment in the United States on the 28th of May, and on the night of the 29th, the unrest spread to over 30 American cities, marking the most significant incident of unrest many of us have ever seen.

While these events are deeply rooted in societal tension that has been building for decades, the timing of recent flare ups of unrest happens to coincide with a new wave of solar activity including the strongest solar flare we’ve seen in three years.

“Solar flares are intense blooms of radiation that come from the release of the magnetic energy associated with sunspots. The National Oceanic and Atmospheric Administration (NOAA) ranks solar flares using five categories from weakest to stongest: A, B, C, M, and X. Each category is 10 times stronger than the one before it. Within each category, a flare is ranked from 1 to 9, according to strength, although X-class flares can go higher than 9. According to NASA, the most powerful solar flare recorded was an X28 (in 2003).” [Source]

Spaceweather reported on May 29th:

THE SUN IS FLARING AGAIN: Today, the sun produced its strongest solar flare in nearly 3 years. The M-class explosion came from a new-cycle sunspot hidden just behind the sun’s northeastern limb. This weekend, the blast site will turn to face Earth, so future flares, if they continue, could become geoeffective. Visit Spaceweather.com for updates.

SOLAR MINIMUM, INTERRUPTED: Yesterday, in the pits of the deepest Solar Minimum of the Space Age, the sun unleashed a flurry of solar flares. One of them, an M1-class explosion, was the strongest flare in nearly 3 years. The source of the activity is now turning toward Earth as it rotates into view over the sun’s northeastern limb:

The question now: What is it? Early views of the emerging active region suggest that it is a relatively small sunspot surrounded by a vast field of magnetic froth (plage). The magnetic polarity of the region marks it as a member of new Solar Cycle 25.

Solar activity typically follows cycles of around 11 years, and cycle 24 ended last year. In April of 2019, scientists predicted that the next 11 year cycle, Cycle 25, would begin sometime between mid 2019 and early 2020.

“Lisa Upton, a solar physicist with Space Systems Research Corporation and co-chair of the panel issuing predictions, said Cycle 25 should begin between mid-2019 and late 2020 and that it should reach its maximum between 2023 and 2026, when between 95 and 130 sunspots are projected. Average is between 140 and 220 sunspots.” [Source]

In 2019, NASA warned that the coming Cycle 25 could produce ‘monster flares’ within the next few years.

As Minneapolis burns and the violence spreads, it appears that Cycle 25 may be kicking off, and given current events, we could be in for a wild ride, as many have recognized a historical link between increased solar activity and major disruptive and revolutionary events for human societies.

In August of 2017, the Unite the Right rally took place in Charlottesville, VA, where, Heather Heyer, was killed and almost 2 dozen other protestors were injured. Later, on September 15th, large protests erupted in St.Louis when police officer when police Jason Stockley was acquitted of murder in the shooting death of Anthony Lamar Smith in 2011.

The year 2003 saw eight of the fifty most powerful solar flares recorded since 1986. This was the same year the Iraq war began, the 6-day Benton Harbor riot in Michigan occurred, and the Miami FTAA protests happened.

Another eight of the fifty most powerful flares since 1986 occurred in 2001, a year that will live in infamy for the events of 9/11, with a large X-class flare and several M-class flares occurring within a week of the destruction of the Twin Towers.

A massive X-class flare was recorded in February of 1992, just prior to the devastating Los Angeles riots.

According to Adam Michalec, there is a long-standing connection between human activity and solar events, especially unrest and violent revolution.

“Dates of historical events are compared with moments of solar maxima, beginning from the year 1750. It turns out that violent occurrences in Europe (like revolutions) are correlated with the periods of enhanced solar activity.” [Source]

While the connection to human behavior and major societal events is yet to be fully understood, interesting research has been done Soviet era scientist A.L. Tchijevsky, in which he hypothesized that increased solar activity has an ‘exciting effect‘ on human beings, affecting our nervous system.

By these comparisons he constructed an “Index of Mass Human Excitability” covering each year from 500 B.C. to 1922 A.D. He investigated the histories of 72 countries in that period, noting signs of human unrest such as wars, revolutions, riots, expeditions and migrations, plus the number of humans involved. Tchijevsky found that fully 80% of the most significant events occurred during the years of maximum sunspot activity. He maintained that the “exciting” period may be explained by an acute change in the nervous and psychic character of humanity, which takes place at sunspot maxima.” [Source]

As we all watch and wait to see just how much crazier 2020 can get, it’s easy to lose perspective on the big picture.

In reality, we are all made of stardust, we’re here for a cosmic blink of an eye, and when we die our bodies return to being stardust and our souls move on to something bigger than any of us can possibly grasp.

The events in front of us right now may seem like a huge deal, but there is so much more happening beyond our perception.

“The nitrogen in our DNA, the calcium in our teeth, the iron in our blood, the carbon in our apple pies were made in the interiors of collapsing stars. We are made of star stuff.” ~Carl Sagan

This article (Strongest Solar Flare in Years Coincides with Riots, Reminding Us that Solar Activity and Unrest are Historically Linked) was originally created and published by Waking Times and is published here under a Creative Commons license with attribution to Dylan Charles and WakingTimes.com. It may be re-posted freely with proper attribution, author bio, and this copyright statement.