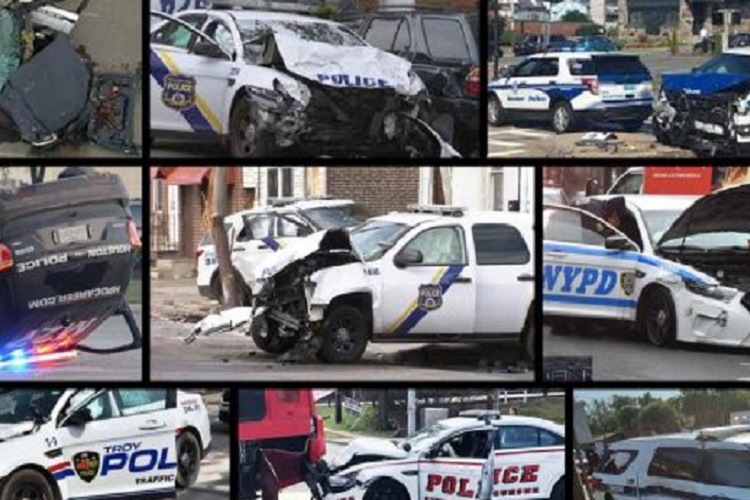 We’ve long known police officers shoot and kill on average about 1,000 citizens in the U.S. every year for a variety of reasons, none of which seem take place in other parts of the world. But we were shocked to learn just how many motorists and innocent bystanders are killed by cops every year when officers give chase to suspects. The numbers are quite staggering.

According to a recently published research study by the Fine Law Firm and 1Point21 Interactive, over 2,000 citizens over a four-year period were killed by cops as police were chasing suspect vehicles. Surprisingly, more than half of those killed were not the suspects!

An analysis by the Fine Law Firm and 1Point21 Interactive found that there were 1,699 fatal crashes involving police chases from 2014-2018, killing at least 2,005 people – 1,123 were not the driver of the fleeing vehicle.

That number might be much higher because, just as with officer involved shootings, those killed by cop statistics are not required to be reported to any federal government database anywhere. Currently, officer-involved shooting deaths are only voluntarily reported to the FBI.

We spoke to Brian Beltz, Research Lead at 1Point21 Interactive via email, who tells TFTP that this study hits home as he knew someone who died from a police chase.

“This issue has been pretty close to my heart for several years. One of my best friends lost his father in a collision with a vehicle fleeing the police. He was simply driving through an intersection and was t-boned by the fleeing driver. While I can’t say whether or not the chase was justified, being in the position to examine the data and be involved in the study was cathartic in a way. Hopefully, people see the results and it helps make sure that every department has and follows appropriate policies and training on how and when to chase suspects. I also hope it makes people who are stopped for non-violent and traffic offenses think twice about running. It puts innocent people’s lives in jeopardy.”

We also spoke to David Fine, attorney at Fine Law Firm via email who points out that the chases are almost never worth it.

“The study cuts to a core risk-benefit analysis that underlies policing and police misconduct litigation. The touchstone question for assessing police conduct is reasonableness-under-the-circumstances. On balance, the apprehension of a criminal suspect ceases to be reasonable if it poses a substantial risk of injury to the traveling public. Because they are a window into how police departments assess public safety risks, pursuit cases provide important insights into the legal and cultural health of police departments.”

The recently published statistics also seem to line up with a USA Today study which encountered similar findings in 2015. According to TFTP’s Matt Agorist:

To put this into perspective, that’s larger than the number of people killed by floods, tornadoes, lightning and hurricanes — combined…According to the report, more than 5,000 bystanders and passengers have been killed in police car chases since 1979…Aside from the 5,000 completely innocent lives lost, an additional 6,300 fleeing ‘suspects’ were also killed, bringing the total to 11,506 dead since 1979.

With these new findings matching well with the old ones, instead of pulling over to the side of the road when motorists see blue lights in their rear view mirror, maybe they should exit the roadway completely. And if they’re on foot, they should probably run like hell. From 2014 to 2018, among those killed were:

The counties with the most number of deaths are also, ironically, the same counties on which TFTP consistently reports issues involving police accountability it seems.

Fifty-seven percent of those killed are between the ages of 18-34. Showing the unnecessary nature of these dangerous chases is the fact that most pursuits do not end in suspects being charged with crimes,

The market is also responding to the crisis and has brought forth the star chase system. Instead of haphazardly launching into a chase with an individual, police can tag their car by firing a compressed air ‘tag’ which allows them to immediately track a fleeing vehicle. Of course, there are 4th Amendment issues if these tags were put to use by corrupt cops, but it’s a start.

Likewise, the leading cause of death for cops while on duty is car accidents as TFTP has reported. Those decisions not to chase seem to be backed up by research with at least two current research studies proving it’s just too dangerous to go after a fleeing suspect.

As the death toll for 2020 approaches 103 for those who’ve been killed by police, it’s time we speak up for the lesser known innocent victims of law enforcement. Share this article with your friends and family in hopes that we can start to save a life every day, instead of ending one.